Haruhi Suzumiya: God Is A Girl 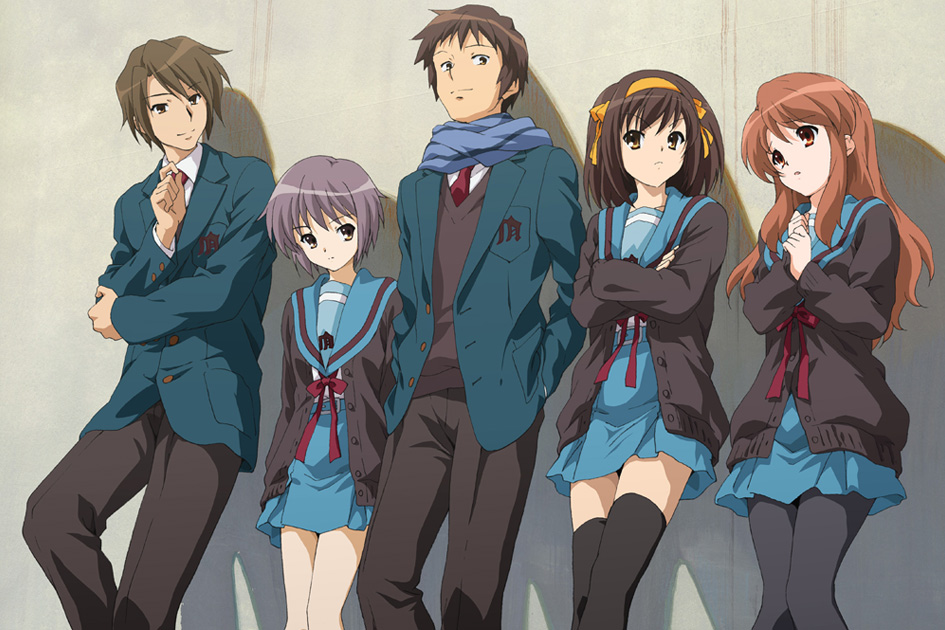 A bored high school girl may in fact be a bored god — the only problem is, she doesn’t realize it.  That’s the basic idea behind The Melancholy of Haruhi Suzumiya.

The SOS Brigade wants you

For a couple of years, you couldn’t go to an anime convention without seeing a lot of Haruhi cosplayers, plus a few Mikuru, Kyon, Yuki, and/ or Koizumi cosplays. Lots of people learned how to do the Hare Hare Yukai Dance from the anime’s end credits.

The SOS Brigade Invasion Tour, which invaded the 2007 Anime Expo in Long Beach, California, sold a huge number of tickets — enough to cause problems for the organizers.

So, what was the SOS Brigade?  And what was it about Haruhi Suzumiya which made it such a smash hit?

“Hey, you stupid otaku writer!  Stop yammering on and on and get to the important part!” — Haruhi.

Ordinary, average high school student Kyon is both the narrator and the main character of this humorous science-fiction story, which deals with all sorts of weird supernatural and metaphysical stuff.

At the beginning of the story, Kyon himself says that he’s not all that interested in science-fiction weirdness. (At least, not anymore.)  He gave up on all of that stuff.

Unfortunately for Kyon, the science-fiction and fantasy stuff is about to find him.   It all starts when a girl named Haruhi Suzumiya shows up sitting in the desk directly behind him.

At first, some of the weird stuff is just silly. There are some very subtle hints and clues about what’s to come later.  On the first day of high school, Haruhi announces that she’s not interested in ordinary human beings.

She then joins every club at school, apparently searching for fun, weird and strange stuff.  She writes a giant chalk message in alien letters, trying to attract aliens.

There are also fun little minor details, such as the fact that Haruhi’s desk remains directly behind Kyon even when they rearrange the classroom seating chart. Is it a coincidence, or does Haruhi will it to be so?

Haruhi changes her hairstyle each day, until Kyon comments on it.  (After this point, she keeps the iconic yellow ribbon hairband in her hair.)

Kyon’s friends and classmates are somewhat surprised that Kyon is able to get Haruhi to talk.  For everyone else, she’s been something of an aloof tsundere.

Haruhi is cute, energetic and eccentric, but easily annoyed.

Eventually, Kyon jokingly tells Haruhi that she ought to start her own club.  That’s where all the trouble really begins.

The story plays with some of the typical high school anime themes.  Haruhi starts off as the tsundere girl (she becomes more likable as she gets more excited about the SOS Brigade). Kyon is Joe Average.

Haruhi gathers up a bunch of characters who seem to match certain essential school story types. With Kyon and Haruhi, these five become the founding members of an unofficial, unrecognized school club Haruhi calls the SOS Brigade:

(ESPer or esper is somebody with Extra-Sensory-Perception, although Itsuki’s power doesn’t fit the typical definition of ESP.)

But Haruhi doesn’t realize this.  These three let Kyon in on their secrets, as well as the possibility that the other two may be lying, or at least that their goals may not be compatible.

(All three explanations are quite wordy. It’s here where Itsuki introduces the idea that Haruhi might be God.)

Kyon doesn’t quite believe them, but they soon give demonstrations of their powers.

From this point forward, the SOS Brigade has a couple of tasks.  From Haruhi’s point of view, they need to search for aliens, time travelers, and ESPers so she can play with them.

From the others’ point of view, she already has found them and is having fun with them.  Now, they just have to keep her from getting too bored, unhappy, angry or melancholy (without her finding out about all of the weirdness and supernatural stuff, or about her apparent reality-warping powers).

Either way, this takes a variety of forms.  They create a hilariously horrible film (horrible for Kyon, hilarious for the real-life audience).  They go to a mysterious island and solve a murder mystery (in the anime, the mystery has elements of a Phoenix Wright video game).

An alternate version of the world where the SOS Brigade doesn’t exist is created at one point. (This light novel becomes the movie.)

The plot gets even more complicated when an anti-SOS Brigade of sorts shows up.  This group is also made up of aliens, time travelers, and ESPers. However, they are rivals, not allies. Their goals conflict with the SOS Brigade’s goals.

It was released in Japan in 2003. It would get an official English-language translation in 2009 after the popularity of the anime series.

The light novels are quite good, and they expand the world of the anime series. If you watch the anime first, the story will be very familiar. Some of the later books have not been animated yet, although the manga covers them.

The first book covers the basic story of the creation of the SOS Brigade.  The second book, The Sigh of Haruhi Suzumiya, tells about the film that the brigade makes. (It was also released in 2003.)

The Adventures of Mikuru Asahina

The Adventures of Mikuru Asahina Episode 00  is the film made within the Sigh of Haruhi Suzumiya.  It is also the first episode of the anime.  (The actual making of the film isn’t explained until the second season of the anime.)

The film is a hopeless mess of cliches, although it’s not bad for a high school student production.

The film is interesting for a couple of reasons.  Haruhi’s silly story somehow assigns Mikuru, Yuki and Itsuki roles similar to their real secret identities. Strange stuff starts happening in the real world. The talking cat in the film starts talking for real.

Somehow, the film has activated Haruhi’s mysterious power. This causes the real world to start changing, and Kyon must fix it.

For North American anime fans, this goofy, funny, and silly episode was probably their first introduction to Haruhi Suzumiya.  It’s a good place to start.

Sigh is followed by The Boredom of Haruhi Suzumiya (2003).  This book is actually a collection of short stories that are included in the anime.

The light novel The Disappearance of Haruhi Suzumiya (2004) would become the movie. Right before Christmas, Kyon finds himself in a world where the SOS Brigade members are normal and Haruhi goes to a different school.

The story has an It’s a Wonderful Life feeling to it, as Kyon has to find a way to bring back his insane but fun world.  The film is touching and sentimental.

Disappearance is followed by The Rampage of Haruhi Suzumiya (2004). These short stories are included in the anime. This includes the infamous Endless Eight.

In the anime, Endless Eight is turned into eight episodes. These episodes are almost completely alike, as summer repeats itself in a Groundhog Day loop.  Generally speaking, fans were not happy with how this short story was made longer than the original The Melancholy of Haruhi Suzumiya novel (only six parts for Melancholy).

The light novel The Wavering of Haruhi Suzumiya came out in 2005. It contains five stories, including the cultural festival story, Live A Live. This would become the anime episode Live Alive, which features Haruhi’s amazing concert footage and Aya Hirano’s singing voice (in the original Japanese version).

The next novel is The Intrigues of Haruhi Suzumiya (2005). This is the first appearance of the SOS Brigade’s rivals.

The first episode of season one of The Melancholy of Haruhi Suzumiya would air on April 2, 2006.

The light novel The Indignation of Haruhi Suzumiya (2006) would be published during the anime’s initial run.  The stories in this book, and the novels which follow, have not become part of the anime.

The light novel The Dissociation of Haruhi Suzumiya (2007) features two separate timelines.  The story continues in The Surprise of Haruhi Suzumiya (2011), which is published in two parts. The rivals return, and there is a mysterious new student who may become a member of the SOS Brigade.

Two different manga versions of The Melancholy of Haruhi Suzumiya exist.  The first was published in 2004 and ends after just one volume of five chapters.  It was illustrated by Makoto Mizuno.

The longer, more complete manga started in April of 2006, just after the first episode aired.  It was illustrated by Gaku Tsugano. The manga includes stories from the light novel series which are not included in the anime.

A comedic gag manga spin-off, The Melancholy of Suzumiya Haruhi-chan, was created in 2007-2008.  This is a sillier, funny version of the story, and the characters are more exaggerated.

For example, Yuki Nagato is an otaku.  A tiny version of the villain Ryoko Asakura (“Achakura”) lives with Yuki.  The SOS Brigade celebrates Halloween (getting a lot of it wrong) and other holidays.

Side characters, such as Tsuruya, get more attention in this series.  Speaking of Tsuruya, Haruhi-chan got a spin-off of a spin-off with the doujinshi manga Nyoron Churuya-san (2008-2009). The “Churuya” version of Tsuruya is tiny and obsessed with smoked cheese.

Haruhi-chan became an anime in 2009.  Despite starting out as a fan-based manga, Nyoron Churuyan-san also got an official anime.

There’s no indication that the characters are aware of the other, original Haruhi Suzumiya version.  Here, Yuki is a shy human, instead of an emotionless alien; although another personality starts to emerge.

The main story is more of a romantic comedy, with a few science-fiction elements. An anime version was created in 2015.

Another spin-off manga, The Intrigues of Itsuki Koizumi, was created in 2012.  It was illustrated by Puyo, who also illustrated Haruhi-chan and The Disappearance of Nagato Yuki-chan.