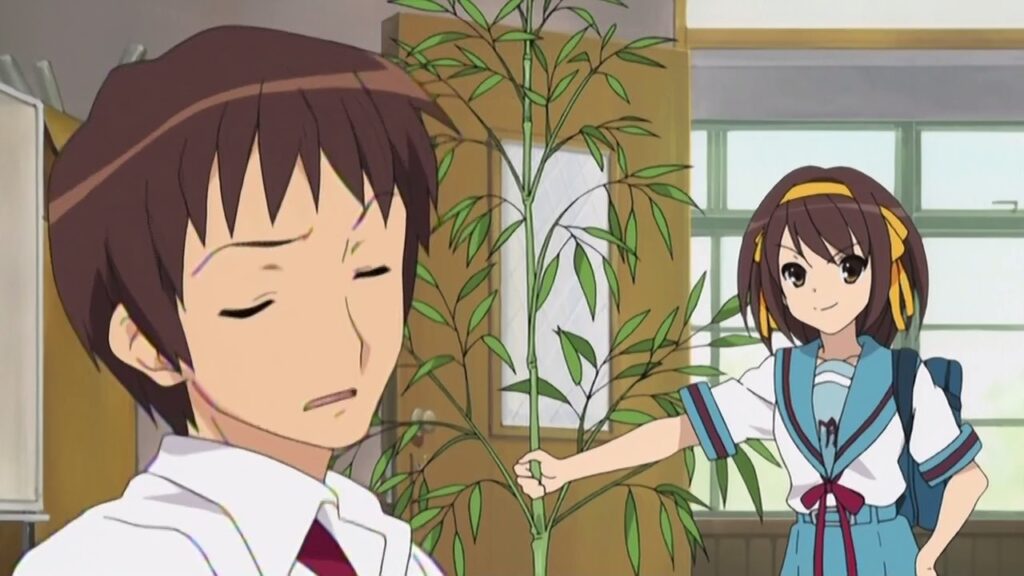 I always feel a little melancholic when writing about Haruhi Suzumiya. Low hanging puns aside, when Haruhi stormed onto the anime scene in 2006 it was a full-blown Otaku phenomenon that many of us would have actively died for at the time. Those who lived it know how it ends though; a truly notorious second season that not even the masterpiece of the movie that followed it could save. Whether it really was Endless Eight or other behind the scenes shenanigans that lead to the death of Haruhi, we’ll never know. For the next couple weeks though, fans can visit the limited run Haruhi Suzumiya Pop Up in Akihabara that simultaneously celebrates the Japanese Tanabata tradition and one of the series most beloved stories.

To summarize Tanabata in a sentence, it’s a long-running Japanese folklore tradition in which participants tie their wishes onto bamboo trees. Called the same in both the anime and the light novels, ‘Bamboo Leaf Rhapsody’ is a signature entry in the Haruhi canon with its wonderful story centering around Tanabata, time travel, and light vandalism. It’s particularly important to the anime’s fans, as it marked the first episode of the long-awaited season 2. Unfortunately, it was the only good episode of that season. Yes, the Haruhi Suzumiya Pop Up shops brings those highs and the lows.

Of course in the real world, the Akihabara Gamers isn’t going to lends its floor space to a Haruhi Suzumiya pop up shop just to celebrate nostalgia. There’s some assorted character goods for sale, and while all of it was a little too uninspired to doll out cash on I appreciate the fact that in 2020 you could see a bunch of new Haruhi all grouped together. The best part of the pop up though; fans could write their own wishes and hang them up on the shop’s Bamboo Tree. Yes, there was more than one request for ‘Haruhi Season 3’/

The Haruhi Suzumiya Pop Up shop will be on display at the Akihabara Gamers until July 26.