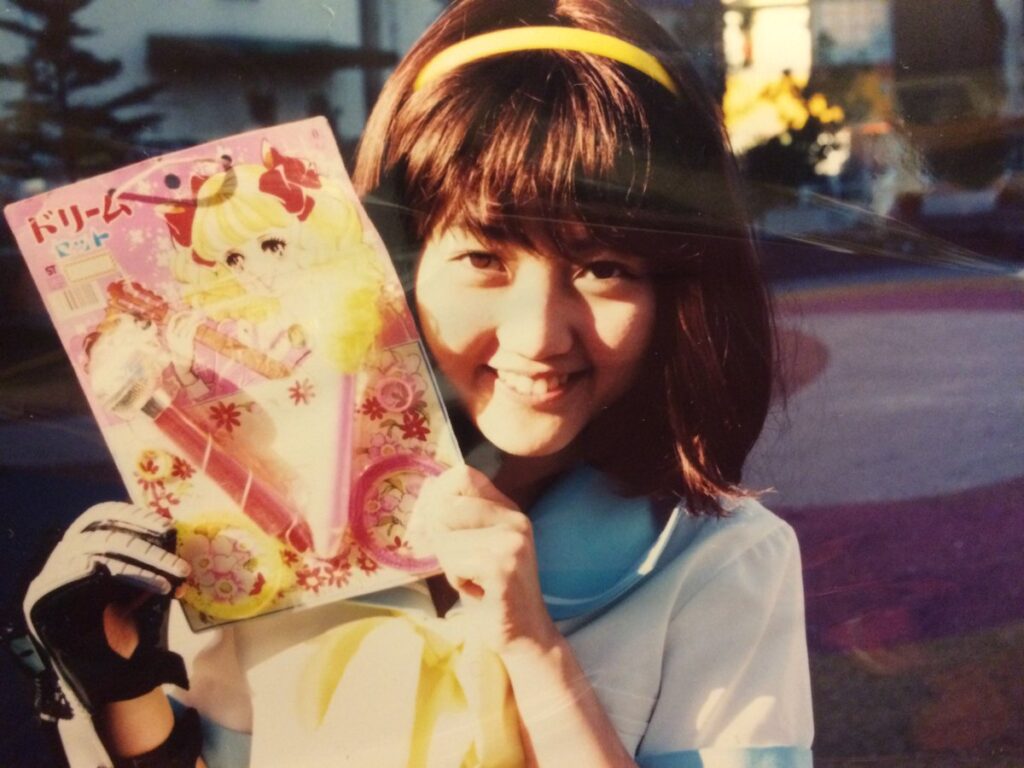 You’re repeating your last year of college because you spent too much time tinkering away with cutting-edge computing hardware. The PC boom fits Akihabara Electric Town (a shopping district known for its extensive selections of electrical components, radio parts, and related goodies) like a glove. Naturally, the advent of the home computer brought new economic growth to the area.

The neighborhood was already gaining a reputation amongst the nerds, a bit nerve-wracking as the 7-year trial of the infamous ‘Otaku Killings’ of the late 80s had just wrapped up. The public at large still harbors misplaced disdain towards self-proclaimed Otaku.

You have your sick personal computer and you are exploring Akiba to find a used copy of the original Tokimeki Memorial. But before you could escape to the commercial nerd dungeons, you get distracted by a girl with a wide smile and a keytar who’s drawn a crowd outside the station.

That trip down memory lane might not be 100% accurate, but regardless whether Haruko Momoi had already started employing her trademark keytar back in 1997, she really dropped guerilla performances on the streets of Akihabara for Street Fighter III 2nd Impact players and aspiring PC builders alike.

She brought otaku sentiments like that power glove with her from the very beginning, unknowingly laying the foundations for an idol culture unique to Akihabara. It was certainly both ambitious and brave for a 20-year-old young woman to try to make it in specifically Akiba and especially at that time; the early 90s anti-otaku sentiments, spurned on by the ‘otaku killer’, much resembled the ‘Satanic Panic’ of the 80s in the United States, when isolated incidents were used by the media to intentionally drum up mass paranoia.

Momoi would professionally debut in 2000 with the iconic ‘Mail Me!‘ single, weirdly and awesomely covered in Sion Sono’s cult classic Suicide Club one year later, and land the leading role in the otaku-satirical Nurse Witch Komugi in 2002.

During her early days, Momoi would describe herself as ‘a bit of a geek’. She openly enjoyed cosplay and older games, professing particular love for her Atari Lynx II. If she was thinking that way in 1997, there was never anywhere for her but Akihabara Electrical Town, which she describes as ‘a place where people can forget about reality and get in touch with their true selves.’

Akihabara had morphed into the forefront of consumer technology by the 1950s, stocking cutting-edge radios, fans, and televisions. Of course, computers were destined to be an Akiba staple, but with PCs came games and the internet, and with those came old-school nerds. The otaku and their brand of near-religious devotion towards technological goods and merchandise meant an influx of cash for the city. That money would lead to all sorts of changes for Akihabara and its nerdy inhabitants, setting it down the path to what it has become today.

All that money coming into Akihabara would lead to renovation and expansion, choking the place full with more for the otaku to do and buy than ever before. It became a city where Haruko Momoi could cultivate and channel nerd-euphoria into colorful sound, being the first to proudly make a career out of crafting, as she puts it, ‘otaku songs. By otaku, for otaku.’

By the early 2000s, her career was popping off almost simultaneously with Akiba’s reputation. The city was making itself known internationally through loving depictions found in the likes of the aforementioned Nurse Witch Komugi and Genshiken, to which Haruko’s band Under17 contributed music.

Even before The Social Media Age, the denizens of Ye’ Olden Forums would gather around to read threads of those lucky few tourists who made their otaku pilgrimages to Akihabara, detailing their wonder at seeing mountains of character merchandise, real live ‘maids’, and gigantic anime billboards towering over the horizons. Commercial revolution fully grabbed hold of the city and hoisted it to new heights.

It was a place where Japanese otaku and tourist alike could live out their nerd fantasies, right?

Drastically increased commercialization and a budding international reputation meant a higher incentive to keep the town running smoothly, and unfortunately, that would more often than not translate to steamrolling into a status quo.

By 2007, just ten years after she began her guerilla Akiba idol street performances, Haruko Momoi was playing large-scale anime conventions in the United States, a testament to how far both she and Akiba sub-culture had come. Back home though, police were beginning to crack down on ‘rowdier’ elements. The otaku district was never a Kabukichou, and these rowdy elements didn’t include Yakuza or other truly violent activity. Instead, the likes of cosplayers, aspiring amateur sub-culture idols, and spontaneous otaku dance parties would be harassed by law enforcement. Cold otaku cash was still welcome, of course. You could go spend 100 dollars at a maid cafe or on a shiny new Haruhi figure, provided you did so quietly.

We just have to wonder… if Haruko Momoi tried to do her thing 10 years later, would she have been squashed by the very town she helped enrich?

As otaku and other creatives were getting told that Akiba wasn’t a place for them to truly express themselves anymore, they could see facets of Akihabara sub-culture get piece-mealed throughout Japan and beyond, while their ‘home’ got streamlined.

Over the next decade, maid cafes would open up all over Japan, and anime would solidify itself as a trendy worldwide phenomenon. From how people used to speak about the town, you’d imagine there’d be some Statue of Liberty-sized Cat Girl monument, but instead, just a dime-a-dozen Yodobashi Camera (basically Japanese Best-Buy) looms over the station.

Even Akiba’s idol culture had taken a more mainstream turn, with the emergence of AKB48, a group spiritually based in Akihabara but 100% formulated to appeal to surface-level tastes. To be fair, stuff like Akibahara’s Dear Stage-produced Denpagumi exists somewhere in between AKB48 and what Haruko Momoi authentically established… but we’re still glad the Gundam Cafe ate the AKB48 cafe.

We’re not saying that Akihabara 2021 isn’t worth your time, though any respectable otaku knows they have to visit other places too. Haruko Momoi herself still roams the streets of the city all the time, at least according to her Twitter, and she’s still performing too. Just next month she’ll be enchanting her die-hard audience at a 20th Anniversary live show, curiously held in Shibuya.

Akiba’s still a fun place to spend an afternoon, but when travel sites call it ‘Otaku Disneyland’ (and they always call it that), they gloss over the reality of it: a shopping district with the occasional voice actor or idol event. A 24/7 Anime convention it is not.

More and more ‘deep otaku’, as they’re called in Japan, prefer the hallways of Nakano Broadway these days, though even that place has come to have some issues.

Today’s Akihabara might no longer be the place of dreams that could spawn the magical and charismatic Haruko Momoi, but with delusion having always been a part of the Akiba experience, something Momoi considers a plus, we can still allow ourselves to feel like it is.