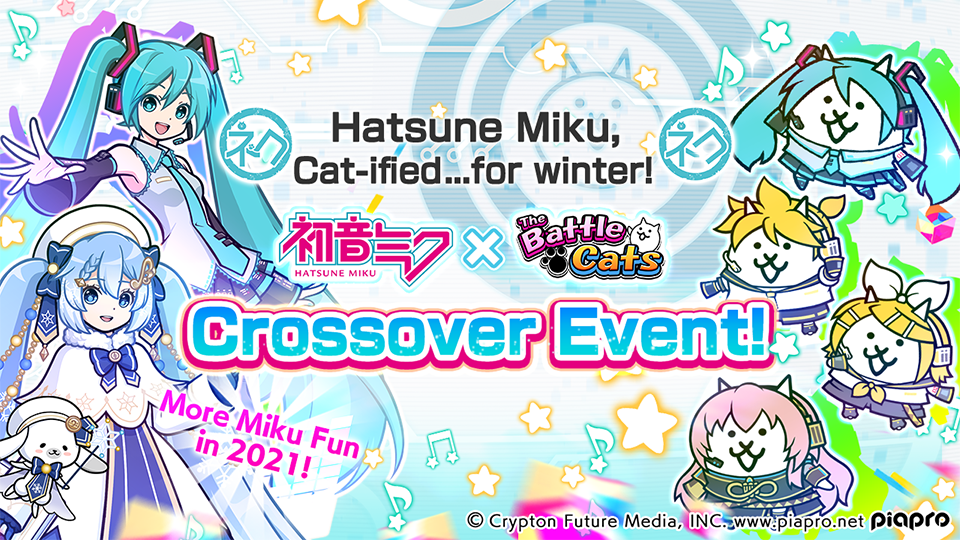 The virtual pop star Hatsune Miku has always had a silly side, whether it was found in ads for Family Mart, or the various official and unofficial Mini Mikus.

However, Miku’s collaboration with The Battle Cats is one of the sillier things she has ever done; maybe even the silliest. In 2020, Miku did three crossovers with the oddball, strangely cute tower defense game. Starting Monday, Miku begins her fourth cat-shaped collaboration.

The Hatsune Miku x The Battle Cats crossover will last from 15 to 29 March. Her previous collab heroes will return for this event, and some new ones have been added.

Kaito & Cat, and Meiko & Cat are only SuperRares; so I guess we know which Vocaloids people like best. Then, there are the three Rares: Neko Rin, Neko Len, and Luka Cat. Apparently, these are not Rin, Len, and Luka turned into cats, but ‘die-hard fans.’ Oh.

Snow Miku will also appear in the Hatsune Miku Special Stages, where Miku will battle you to the tune of ‘Fondant Step’ (this year’s Snow Miku theme). Snow Miku’s pet Rabbit Yukine will join the Gamatoto Expeditions.