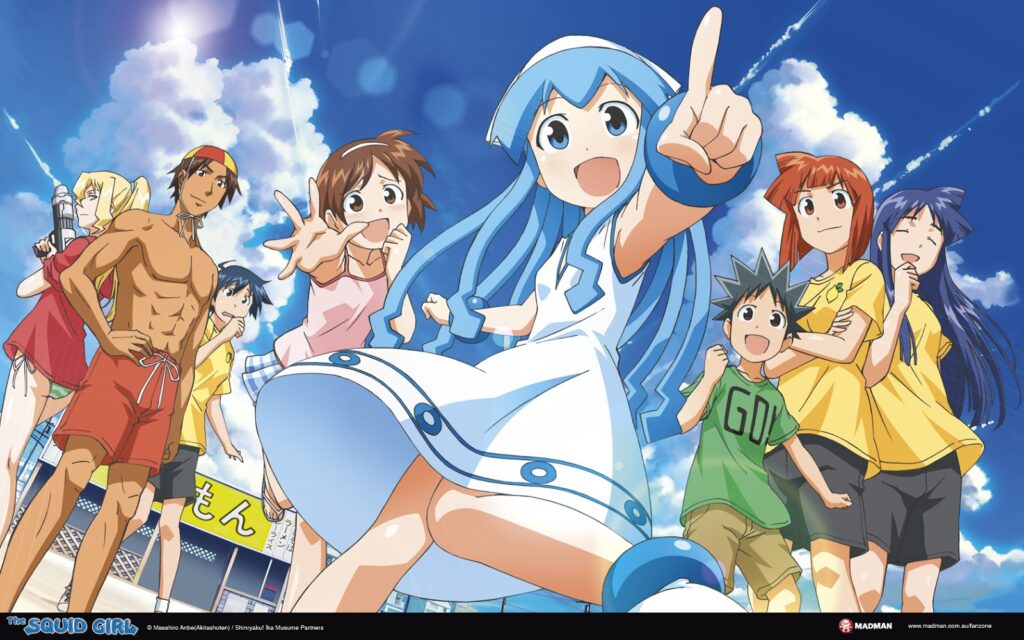 If the world could be conquered by cuteness, Squid Girl would certainly be a strong contender.

Squid Girl is a funny and heartwarming anime and manga series which tells the story of an invader from under the sea. Her name is Ika Musume, which literally translates as “Squid Girl,” and her greatest weapon is being cute.

The name is pretty self-explanatory.  She’s a squid who looks like a girl, or perhaps it would be more accurate to say she’s a girl with squid-like features. In fact, if it weren’t for her blue hair tentacles and squid-shaped hat (which may be the top of her head, and not an actual hat), she would look like an ordinary, if extremely eccentric little girl.

In the first episode, Squid Girl comes ashore at Yuigahama, a beach near Kamakura.

She immediately heads for the nearest human building, a small beach cafe, and declares it to be her headquarters for conquering Earth.

Squid Girl actually has some pretty good reasons for wanting to take over. Her aquatic world has gotten polluted by trash and other stuff that we human beings have dumped into the ocean. There’s no denying that we have made a mess of things by polluting the ocean, land and sky.

Unfortunately, she very quickly discovers that conquering the surface world is a lot harder than it looks. In fact, just conquering one Japanese beach proves to be just about impossible for her.

For one thing, nobody takes her seriously.  She looks and acts like a little girl who is playing cosplay dress-up.  The Aizawa sisters, who run the Lemon Beach House, immediately cow her into waiting tables.  This happens before she has even fully introduced herself.

Squid Girl realizes that she has gotten sidetracked from her mission, and gives a demonstration of her power.  She uses her powerful tentacles to knock a hole into the wall of the beach cafe.  This is somewhat accidental, as she was trying to kill a mosquito.  Still, most people would consider it to be pretty impressive.

Hilariously, this doesn’t frighten either of the two sisters, Eiko and Chizuru.  Instead, Squid Girl just ends up in even more trouble; now she must work as a waitress to pay for wall repairs.

After the first episode, the story settles down into a routine of silly gags, comedy and funny stuff. Most episodes are divided up into three parts.

In a typical episode, Squid Girl will discover some human invention, idea or concept that is totally foreign to her. These range from an umbrella to English lessons to exercise class.  Much of the humor comes from Squid Girl’s attempts to understand this stuff.

In one episode, Squid Girl sympathizes with the giant squid villain of a local tokusatsu hero stage show. In another episode, she learns that her powerful tentacles can be useful — but extremely unfair — in baseball.

When the show is not being silly or funny, it can be surprisingly touching.  Squid Girl can be caring or considerate when she wants to be, and she is generally a friend to small children, senior citizens or animals.

When the local schoolboys build toy boats at a local river, she follows hers all the way downstream, imagining herself on a magical journey floating through the countryside.

Even this little bit of slow-moving cuteness ends with a joke. When she finally reaches the ocean, she returns to the beach cafe — except it isn’t her cafe. It’s not the Lemon Beach House, but the Lennon Beach House, filled with Beatles and Yoko Ono references.

At the end of the first season, there is a minor crisis when Squid Girl’s squid power starts to fail. At first, it looks like she will return to the ocean, but she doesn’t — instead she decides to live as an ordinary girl.

Finally, things return to “normal” when she saves a girl from drowning.  Her tentacles respond to the emergency.

Squid girl has a wonderful bunch of characters.  Here are some of the more common ones: 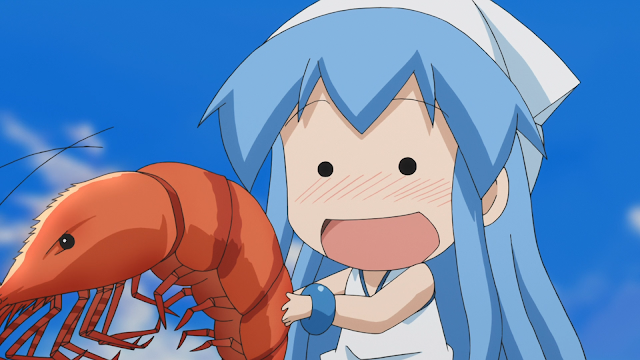 She’s often naive and immature. Since she’s not quite human, her exact age is indeterminate, but she seems comfortable around elementary school kids. She hasn’t forgotten her goal of taking over the Earth, but she does get sidetracked easily. She’s determined and optimistic.  She loves to eat shrimp, and says “de geso” instead of “desu” as a verbal tic. Since “de geso” doesn’t translate easily, she uses a lot of squid puns in the English translation.

Be prepared for a lot of “squidly” and “squiddy.” Ika Musume is scared of killer whales and sharks, which are the natural predators of squid.  This fear even extends to beach toys shaped like killer whales. She can make squid ink spaghetti using her natural ink. This looks disgusting when it comes straight from her mouth, but the cafe customers quickly discover that it is quite tasty.

A few episodes feature a tiny version of Squid Girl, who is even cuter than the original. In one episode, there is even an evil twin/ mischievous version of Mini Squid Girl who dresses in black.  The Mini Ika Musume episodes seem to take place in an alternate universe or dream world, and don’t affect the canon (what little of it there is).

Eiko Aizawa, the younger of the Aizawa sisters.

She’s easily annoyed at Squid Girl, she’s something of a tomboy, and she’s not good at studying.  Eiko is in high school when she’s not managing the cafe.

In some episodes, she does bond with Squid Girl over video games.

She frightens Squid Girl.  She’s typically a quiet, kind girl, but when there’s trouble — which is often the case whenever Squid Girl’s around — she shows a lot of physical strength and intimidating attitude.

Much like Brock from Pokemon, Chizuru’s eyes are seldom seen.  Apparently, this is due to poor eyesight. We actually do see her eyes a few times, and it generally means that she’s angry or threatening someone.

He likes to play with Squid Girl.  Mentally, he seems to be about the same age as her, although he calls her “nee-chan” or “big sister.”

Sanae, a girl with a huge crush on Squid Girl.

She stalks her.  Squid Girl is generally annoyed by her.  Her obsession with “Ika-chan” has led her to doing some weird things, such as dressing up as a shrimp.

Nagisa, a girl who works at the Lemon Beach House.

She’s frightened of Squid Girl. She sees Squid Girl as a legitimate threat to Earth. She’s pretty much the only person on Earth who feels this way.

Squid Girl is happy to know that anybody is frightened of her, and takes advantage of this as often as possible.

Goro, the local lifeguard. He has a crush on Chizuru.

Squid Girl sees him as an ally because he is a “guardian” of the sea.  Of course, Goro is more interested in protecting people from the sea, rather than the other way around.

She is convinced that Squid Girl is an alien.  She works with the “Three Stooges” of Harris, Clark and Martin.

In the episode where everyone studies English, she is the teacher — and she seems to temporarily forget that she knows Japanese. For that one episode, a different voice actress (Shelley Calene-Black, who did voices for many ADV Films productions) takes over the role, so she gets a much more natural-sounding English voice.

The Three Stooges are researchers.

They come up with many weird inventions which often backfire or are way over-the-top — their unbreakable video game system is literally too tough to play. When they fix a remote-controlled toy car, the end result is a flying car straight out of Back to the Future.

The Southern Winds beach cafe owner and his daughter, Ayumi.

The Southern Winds (Minamikaze) competes with Lemon Beach House.  The manager tries to make his own version of Squid Girl, but his version ends up looking weird and creepy.

The manager’s daughter ends up wearing the Squid Girl costume, which features a large kigurumi mascot head.  The girl is shy, so wearing the kigurumi helps.

History and Other Details

Squid Girl is otherwise known as The Squid Girl, Ika Musume or Shinryaku! Ika Musume. It started out as a manga by Masahiro Anbe.

The first season consists of 12 episodes.  The second season aired in 2011.  There have also been several OVAs.   The anime was originally licensed in North America by Media Blasters. In 2016, Sentai Filmworks took over.

Ika Musume is voiced by Hisako Kanemoto, who has gone on to voice Sailor Mercury in Sailor Moon Crystal, among others.  Kanemoto also joins the band Ultra-Prism in singing the first opening theme song, Shinryaku no Susume.

In the English dub, Christine Marie Cabanos does the voice of Squid Girl. Cabanos has also voiced Azusa in K-On!, Madoka in Puella Magi Madoka Magica,  Mako in Kill La Kill and several others.

The Nintendo game Splatoon had a crossover with Squid Girl.   In the game, the main characters are Inklings, a type of squid-like humanoids.  The characters have tentacle hair which vaguely resembles Squid Girl’s tentacles.

In 2015, Squid Girl gear was introduced in the game.  The gear included Squid Girl’s iconic dress (called a tunic), her hat and shoes.  The gear is more than just decorative; it comes with boosts to certain abilities.

The dress and shoes change color to match the player’s ink.

There actually is a Yuigahama beach which resembles the beach in the anime.   The characters also ride the local Enoden streetcar when they visit Kamakura.  Japan is full of trains, but the Enoden is unique for having street-running sections like a tram or trolley.

Squid Girl is available at Crunchyroll.  There is also a five-disc Squid Girl Blu-ray available at Amazon and elsewhere. The 12-disc limited-edition Blu-ray premium box set includes both DVD collection and Blu-ray discs, a booklet, buttons, key chain, art card and lenticular (the picture “moves” when you tilt it) card.