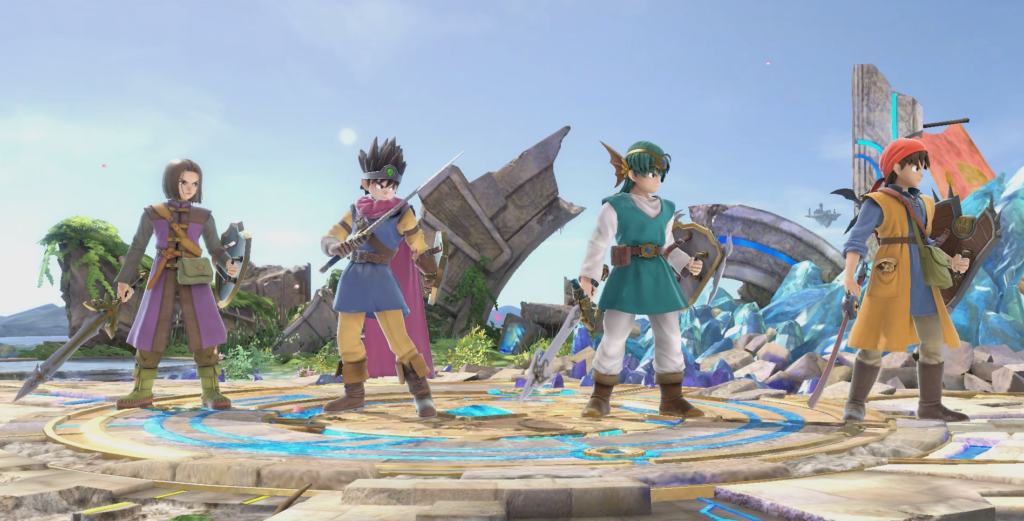 I’m as happy about the Hero, or Heroes, from the Dragon Quest series making the Super Smash Bros. cut as I am generally about the series finally becoming a little more popular in the west. You’ve probably heard this shpiel before but in Japan, Dragon Quest is way more popular than Final Fantasy and just about every other video game franchise that doesn’t star an Italian plumber or a yellow mouse. Yesterday, the version 4 updates of Smash Ultimate launched and along with it the Hero character as well as a stage specifically based off the most recent Dragon Quest which is headed to the Switch later this year.

You could watch the 20+ minute above video to get the full rundown on the Hero but I’ll offer up my own hands on impressions too. To the dismay of some, yes he is another sword boy, but he’s a bit slower than the majority of the Fire Emblem gang. More over, the Hero brought magic over from Dragon Quest. A lot of it. His B, side-b and Up-b are all various magic attacks that have are more powerful and have a bigger range the longer you change them. His down b brings up a menu where he can use a randomized variety of other magic spells; Some are attacks, others are stat booster’s, and there’s even a heal. Of course, these additional magics require some extra button pressing so they may not always be worth using. His sword alone has some weight to it too, so you’ll build up some pretty decent damage by just getting a few hits in.

Aesthetically, I love the fact that instead of just doing alternate costume colors for the Hero from Dragon Quest XI, they’ve brought 4 different Heroes in. Granted, they all play the same but its an especially nice tribute. I got my start with the series when Dragon Quest VIII hit the PS2 in the mid-2000s and still have a huge fondness for that game. Very glad to see that Hero has made the cut. I’m not surprised that the hero from DQIII is here either as that’s the classic favorite for old school fans.

You can play with Hero in Smash Ultimate now.