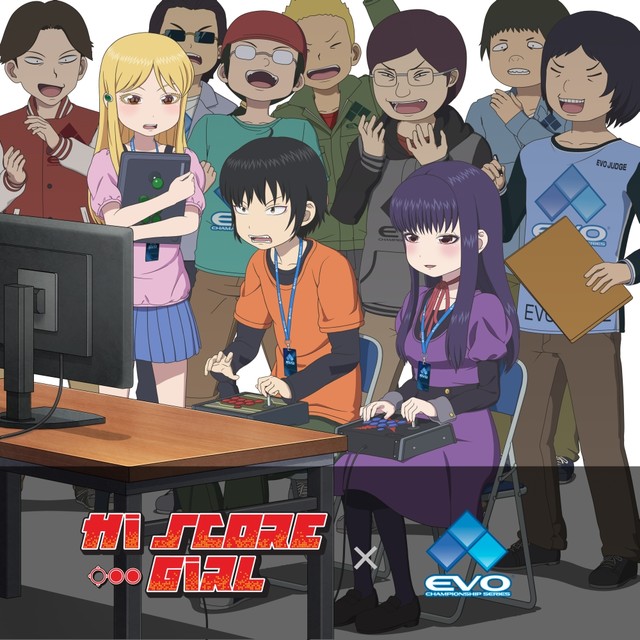 The anime rom-com about fighting games and the world’s biggest fighting game event are collaborating. Could there be a more perfect match? EVO President Joey Cuellar revealed their collaboration with Oshikiri Rensuke’s Hi Score Girl via Twitter on July 17, just in time for EVO 2019, set to take place this August in Las Vegas, Nevada.

EVO 2019’s Hi Score Girl collaboration has produced a special illustration for the event, which will be sold on both t-shirts and posters during the tournament. The image depicts protagonist Haruo Yaguchi battling against Akira Ono in one of the qualifying tournament pools for EVO, complete with an official adjudicator there to watch.

It’s worth noting, however, that this isn’t the first time Hi Score Girl has collaborated with EVO. Rather, this year’s EVO Japan – which took place in Fukuoka this February – also featured a collaboration between Oshikiri Rensuke’s series and the fighting game tournament event.

But, as business developer for EVO Mark Julio pointed out, this is not only the first time that the EVO Hi Score Girl collaboration has come to the west, it is also the first time that a piece of Hi Score Girl merchandise has been made officially available in the US. This is despite, of course, the show being produced as a Netflix Original for the American streaming giant, Netflix.

Hi Score Girl has had a troubled development history, with the original manga forced to go on hiatus as author Oshikiri Rensuke and Square Enix fought legal battles with SNK Playmore for using some of their properties, such as The King of Fighters and Samurai Shodown, in the series.

Luckily, Square Enix and SNK Playmore were able to meet a settlement in 2015, which allowed Rensuke to resume the manga and finally bring it to an end in 2018. It even got picked up for two seasons of anime by Netflix, but it must be said the series does seem to have slipped under the radar a little bit.

That’s a real shame, as it’s not only an excellent love letter to the world of fighting games, but also because the people over at J.C. Staff put a lot of time and effort into nailing the anime adaptation.

Hopefully, bringing Hi Score Girl to EVO 2019 in the form of this collaboration should raise the series’ profile a little bit, bringing it the attention it deserves. I honestly couldn’t think of a more perfect team-up.