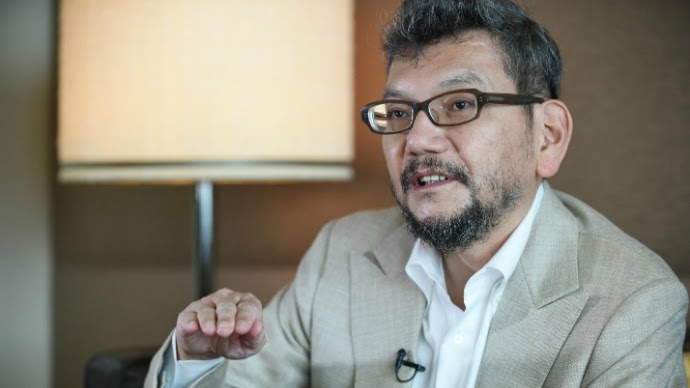 You can’t name a list of anime greats without including Hideaki Anno. His work on Neon Genesis Evangelion alone puts him on the list, and there’s a lot more that he’s done besides that. His story isn’t one filled with only happiness, but it deserves to be told.

Before the Movies and TV Shows of Gainax

Hideaki Anno was always interested in art and drawings. He loved watching anime and tokusatsu. He wasn’t the most ideal student though, preferring the arts over general studies.

The only reason he attended university after high school was because he read a brochure about the Osaka University of Arts, which accepted applicants based on their artistic skills rather than common test scores. It was here that he met the men he would find Gainax with. Before then, however, they would have their first team production as Daicon Film by making the opening animation for the DAICON III convention.

His work on the Daicon III short film would get him noticed enough to work on the anime for Super Dimension Fortress Macross. The experience would be very beneficial to him and he would, in turn, keep the momentum going as he worked on the short film Daicon IV for the eponymous convention. His diverting focus on the production of the short film (as well as an Ultraman parody fan film) would be the reason for his expulsion from Osaka University.

Nonetheless, Daicon Film’s work on the Daicon IV short was a huge success (so successful that you can find black and white shirts based on it on this website), proving that this small team had serious talent behind it. Anno would go on to become an animator for Nausicaa of the Valley of the Wind, a film by Hayao Miyazaki. The two would forge a close friendship out of the respect and mentorship that Miyazaki provided to Anno.

In 1984, Hideaki Anno and the friends he met at Osaka University would form their own animation studio and name it Gainax. Their first project was Royal Space Force: The Wings of Honneamise. The studio would discover the unfamiliar troubles involved in a production scale this large but would still release the film to high praise for its characters and themes. Unfortunately, the film failed to recuperate the cost of its production.

Their next project would be the famous Gunbuster. The six-episode OVA was Anno’s first project as director and would be the studio’s first successful project. The OVA is still looked back fondly for its mix of action and sci-fi elements, alongside the strong female cast. Many famous character-types and elements that would come to be associated with Gainax can be traced back to Gunbuster.

Anno would follow Gunbuster with Nadia: The Secret of Blue Water which circumstances would lead to him directing as well. Although the show was well-received upon its release, his experience directing it, along with the fall-through of a sequel project for Royal Space Force: The Wings of Honneamise, would lead him to spiral into a four-year depression.

And yet, it’s thanks (in lieu of a better word) to this dismal four-year period that Neon Genesis Evangelion came to be. Anno was given a time slot to put whatever he wanted in it and Anno wanted to work on something with the idea of “not running away”. Taking elements from all of their previous works and well as the observations of his own depression, Neon Genesis Evangelion aired in October of 1995.

Set in a world after a cataclysmic event, the series followed Shinji Ikari and two other pilots in the fight to stop alien monsters called “Angels” from eradicating humanity, all the while dealing with their own inner turmoils. Strong elements from the plot can be compared to Gunbuster, although the tone is much darker and bleaker, even more than Nadia: The Secret of Blue Water was.

Neon Genesis Evangelion would become a mega-hit and a staple in anime history, known for its mech designs, the opening song, the religious imagery, and most importantly the philosophical and psychological themes that it presents through its characters. The intense focus on these themes would stem because of the complicated production process that accompanied it.

The series was constantly getting by with episodes finished close to their deadlines. Due to Gainax’s lack of experience among other issues, Anno and his team faced troubles as the series progressed. Because of this and Anno’s sudden interest in psychology, the second half of the series strengthened its focus on the characters and their troubling inner thoughts, instead of the grander plot involving the threat of humanity’s extinction.

This change in focus and the complex themes that emerged would garner more attention and praise for the series.

Much like it is now, the ending of the series left people split when it first aired. The final two episodes serving as an analysis of its characters as they confront their deepest issues would lead to much praise.

On the other hand, many fans harshly criticized the show for seemingly abandoning the bigger plot and theorized that the extreme change in the final two episodes (and potentially the latter half of the series) was due to reasons such as budget constraints.

And others would take their displeasure even farther in the form of death threats.

Although Anno and his team were proud of the finale of the series, they’d go on to make The End Of Evangelion, a film that’s meant to portray an alternate and marketed “true” ending for the last two episodes of the series.

Similar to the series, The End of Evangelion would also garner a split reaction; praise would be directed for the visuals and animations, while criticisms would focus on the confusing turn of events in the second half of the film. Nonetheless, it has proven to be one of the most popular anime films and is considered a must-watch just like the series that preceded it.

Anno would go on to direct Kare Kano in 1998, and then begin working on live-action projects after such as Shiki-Jitsu and Cutie Honey.

Studio Khara and the Evangelion Rebuilds

Anno wouldn’t return to animation until 2006 when his website was updated to reflect the Khara studio that he founded. Rumors began to swirl around that this new studio would be tackling a new Evangelion-related project. These rumors were confirmed with the announcement of Rebuild of Evangelion, a four-part film series that focused on retelling the story of Evangelion in a new light for the first 2-3 movies, and then giving the series a brand new ending with the fourth entry.

Each of the Rebuild films faced their own delays (Anno’s longstanding separation with Gainax probably didn’t help). With the first three released over a period of six years (the initial schedule had them coming out very close together), Anno found himself struggling with his depression once again as he worked on the films. It’s likely this was due to the entire six years being spent on Evangelion exclusively.

Anno and Studio Khara would go on to make the Japan Animator Expo series in 2014, which led to various (and mostly unrelated to Evangelion) anime shorts. This would not be the only non-Evangelion project that Anno would work on.

In 2016 it was announced that Anno would be the director for an upcoming Godzilla film, which would be Shin Godzilla.

Anno’s status as a lover of the tokusatsu-genre, along with the works he made prior, generated a lot of hype when this was announced. The hype only increased once the movie poster was leaked and the trailer was released. Inspired by recent disasters in Japan, the film portrays itself with an important message just like the original.

Shin Godzilla is a return to Godzilla assuming the role of a threat to humanity. Although dialogue and politically-heavy for a Godzilla film, the film was critically acclaimed and successful at the box office.

After numerous delays (the final Rebuild film was originally announced with a release date of 2008), one of which was Anno’s work on Shin Godzilla, development finally resumed on Evangelion 3.0 + 1.0. On July 6th, the first ten minutes of the film was shown during a convention in Paris.

For the fans who still can’t believe that the movie is happening, it was also announced that Anno would be the director for the new Shin Ultraman film that’s set to come out in 2021.

People are quite excited about the film, after seeing how he handled Shin Godzilla. For Evangelion fans there’s good news to pick from it as well: Anno is meant to fully take on the project after he completes Evangelion 3.0 + 1.0.

Of course, delays do happen (knock on wood x1000), and many things are being delayed due to COVID-19, but as of this moment, it does seem like Evangelion 3.0 + 1.0 is actually going to be released and is going to provide an ending that may or may not satisfy its fanbase.

Hideaki Anno is a master of his craft. His contributions to anime and media are undeniable, and his Evangelion series is an experience that I’d advise all to try. But, he is also simply a human being who struggles like any other.

The difference is that he can express his struggles and life experiences into art. Whether it’s Evangelion or any of his other wonderful work, whether you love it or hate it, you can guarantee that he’ll show you something different and wholly unique.

Where to watch his work

I can’t just talk about the man and then not list out where to watch what he’s made. Whether you’re just looking to rewatch some classics, or this is your first experience, here’s a list of some of Anno’s famous work.

Gunbuster – There currently isn’t any way to watch the original six-episode OVA of Gunbuster without spending the cash for some older releases. There is the option of watching the “theatrical” version on VRV if you have a subscription, but reception to it isn’t as great as the original release (prime complaint being that the “theatrical” version cuts down a lot of important content).

Nadia: The Secret of Blue Water – Anno’s sea-faring anime involving rude Atlanteans can be watched on VRV in the Japanese or English dubs if you have a subscription.

Shin Godzilla –  The movie is available to rent or purchase on Amazon Prime Video. With absolute confidence, I can say that if you like or have the smallest interest in Godzilla, you should give this film a chance.