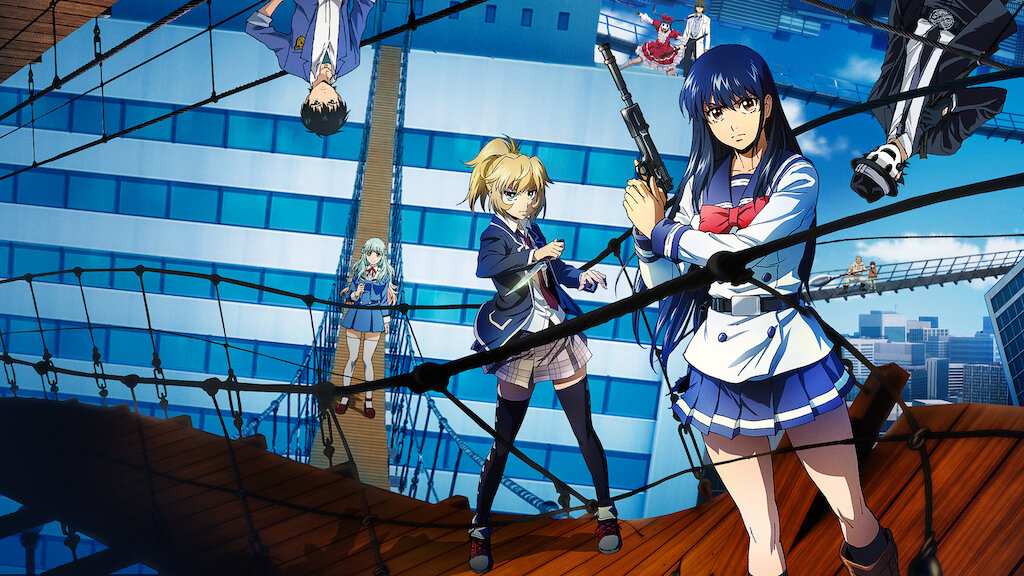 The question that lingers in anime fans minds that haven’t seen the series yet is simple: Is the High-Rise Invasion anime good?

Let’s start with this: It’s true that there have been a few death game survival horror anime released over the years. The genre is uncommon, but a good title pops up every season or so. Each one has a particular gimmick and Netflix’s High-Rise Invasion (Tenkuu Shinpan) somehow manages to involve skyscrapers and masks in its thrilling premise. The result is an interesting anime whose death game rules and principals work like a game of tag. However, in terms of survival horror, High Rise Invasion is no Alice in Borderland and lacks the stakes to really pull you in. 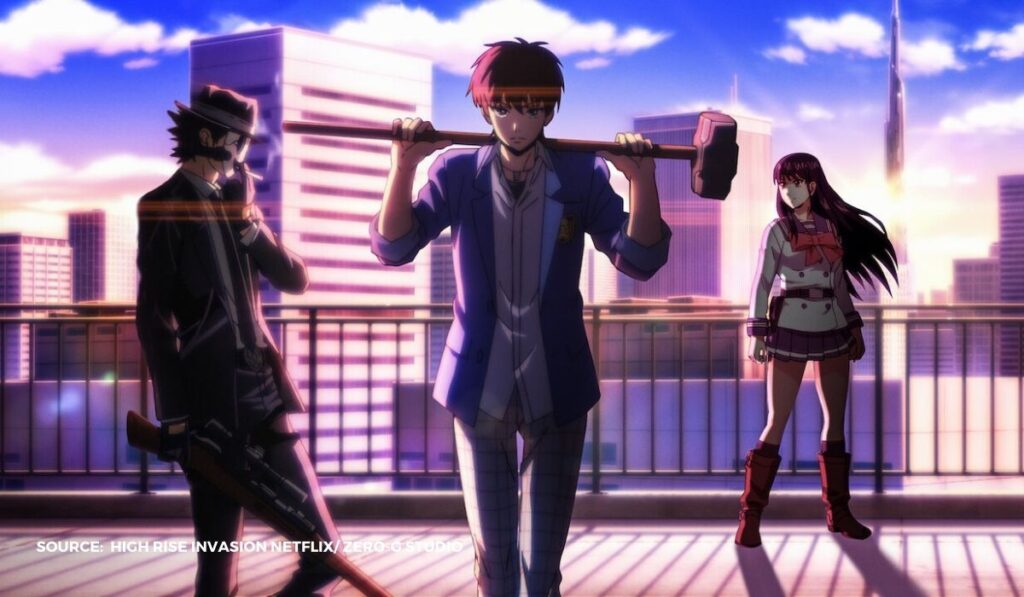 We’re first introduced to a mysterious world of skyscrapers connected by string bridges in the air. Then we get to meet the High-Rise Invasion characters: High-schooler Yuri Honjo finds herself being hunted down by individuals wearing white masks who goad her into jumping off the building. Desperate for help, she searches for her older brother, Rika, whom she manages to get in touch with via cellphone. Along the way, she also bumps into the violent Mayuko Nise and the elusive Sniper Mask. She manages to befriend Mayuko, who promises to reunite Yuri with her brother. As they gather allies and fight off enemies, Yuri learns that in order to escape, she must become a God Candidate.

On the surface, High-Rise Invasion checks off all the requirements of a good survival horror: violence, exploitative gore, and demented killers. However, the viewing experience was a difficult slog and I think it would have benefited from a weekly release as opposed to a 12-episode binge watch. While the anime has some surprises and thrills, the majority of it feels somewhat formulaic and predictable. It’s missing a good hook to keep us alert. 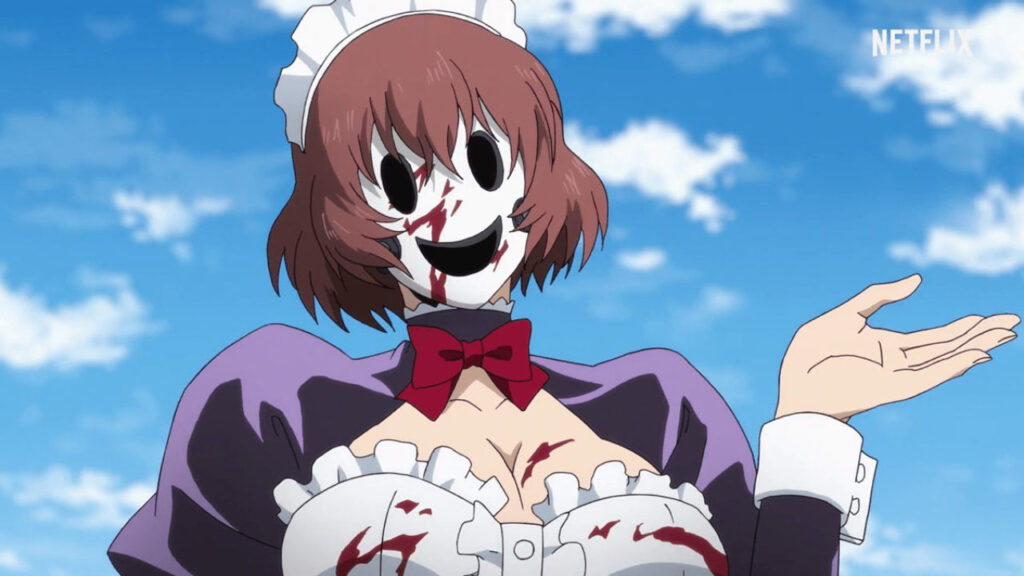 Does High-Rise Invasion do a good job to build our sympathy for Yuri and her friends and care if they die? The short answer is no. There were moments where I was rooting for them to survive and win another fight, but they were scarce. I felt indifferent to their conflicts. It was frustrating because the anime feels devoid of any meaningful character development and world-building, despite an initially intriguing setup. There’s also some blatant fan service in between scenes, but not too much to shift focus to it. Whether it’s to your taste is up to you, but not even Highschool of the Dead levels of fan service can make this anime more entertaining.

Despite my mixed feelings, High-Rise Invasion does have some good points. In the anime, select participants are chosen to become God Candidates, and a girl named Kuon Shinzaki is one of them. She’s introduced a bit later in the series, but she is depicted as a naïve girl with a slight crush on Sniper Mask. Her power levels are also off the charts and she’s aware of more than she shows. Honestly, just seeing this happy-go-lucky character who tries her best in the grim world is refreshing to see. 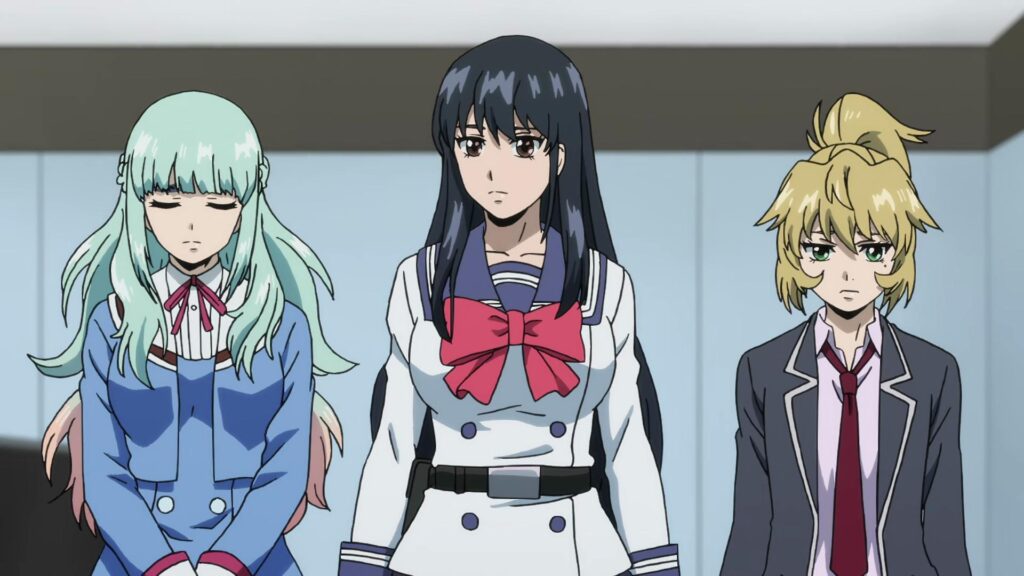 Speaking of masks, the designs of the white masks are pretty cool and the green techy interior of it is the main reason why these people have to obey the masks’ orders. Each one has an expression symbolizing different emotions. Sniper Mask, in particular, is an interesting character who has a mysterious connection with Yuri and Rika. He teeters on being both the anti-hero and antagonist due to being controlled by the masks, but he’s shown to be able to make his own decision and maintain his will to a limited extent. Honestly, any sniper with a sick mask like his is cool.

On a last note, Yuri herself seems to go through her own arc throughout the series and seeing her progression from damsel in distress to headstrong survivor is pretty satisfying. Near the end, she knows more about her role in this world and has a goal to accomplish. When her brother, Rika, is held hostage, she’s more determined to find allies and end this chaotic world. 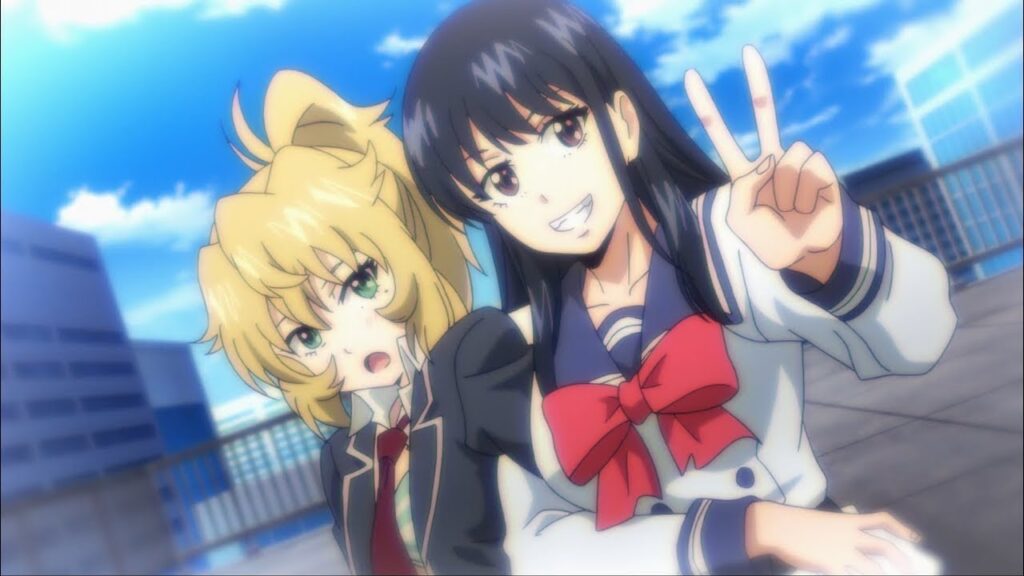 The anime ends somewhat frustratingly on a cliffhanger, obviously meant to tease a potential High-Rise Invasion Season 2. When that arrives is the question, but just enough development is made from Yuri’s part that it was a good place to stop. While I would’ve liked something more definitive, the best this show can give me is the anticipation for a much needed follow up.

You can watch High-Rise Invasion on Netflix.

other Jacob Parker-Dalton 7 days ago

other Corey Prasek 3 hours ago