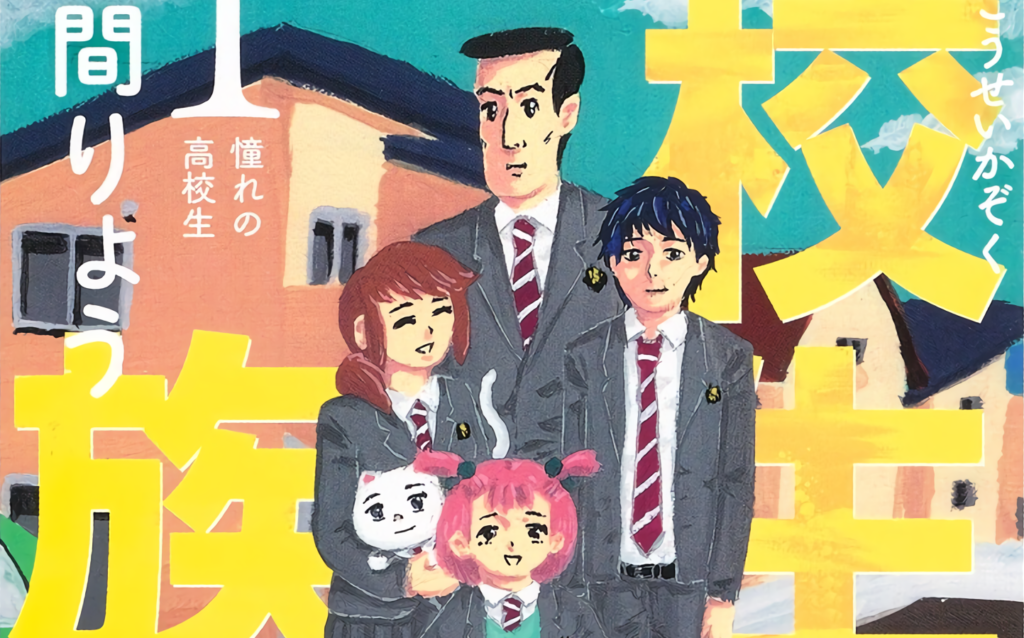 Perhaps me and High School Family got off on the wrong foot.

When it first launched in Weekly Shonen Jump back in September of last year, I was expecting something more along the lines of series author Ryo Nakama’s last series, Isobe Isobee Monogatari. That story centered around a slacker samurai from the Edo period: it was unfortunately never officially licensed outside of Japan, but proved popular enough to run for five years and sixteen volumes between 2013 and 2017.

This wasn’t exactly an unrealistic expectation considering the creator connection, but the comparison isn’t really there. First of all, while Isobe Isobee Monogatari was drawn in the style of a traditional ukiyo-e painting, Nakama doesn’t appear to have made any special decisions for the art of his latest series. And while Isobe Isobee Monogatari provides us with a new perspective on Japan’s ancient past, High School Family is more or less exactly what it says on the tin: a… high school family. 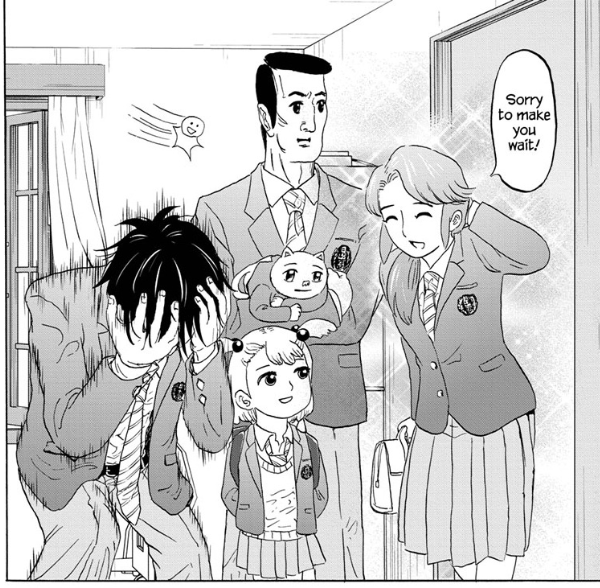 Does this mean that the series has nothing to offer, though? Not quite. Over the course of close to a year, I’ve come to appreciate more and more the strengths of High School Family and what it brings to the Jump magazine. Surprisingly enough, none of that really has anything to do with its comedic format, even if it does get a good laugh out of me every now and then.

First of all, High School Family is a surprisingly competent sports series. This is because two members of the titular Ietani family are in the tennis club and volleyball club respectively: Kotaro (the son) and Ichirou (the dad). As a result, quite a lot of the manga ends up being about some kind of physical activity, which is good, apart from the fact that it tends to sideline Haruka (the daughter) and Shizuka (the mom).

Back when Jump had no sports series in its roster for the first time ever in its decades-long history from July 2020 to February 2021, High School Family was there to fill the gap until Nine Dragons’ Ball Parade came along. Being a series about a nuclear family who go to school together, this isn’t exactly your typical sports drama, either: Ichirou’s storyline in the volleyball club, in particular, sees him grasping with feelings of regret, nostalgia, and the desire to reclaim his glory days.

I don’t want to overstate the point too much here, because the fact that a middle-aged man is playing volleyball alongside a bunch of high schoolers is ultimately used for comedic effect. 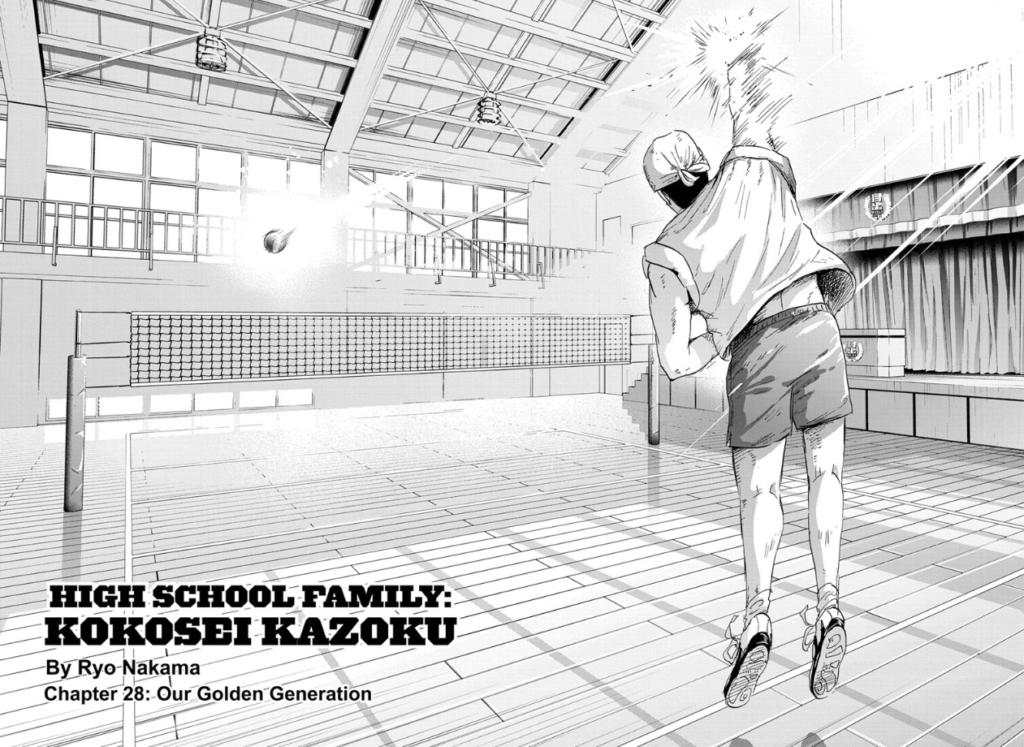 That being said, I’d be lying if I said that I didn’t empathize just a little bit with how Ichirou learns what makes him feel young again, and how he was able to convince the manager to give him a spot on the team through sheer passion. The way that he inspires Kotaro to do his best on the tennis team in the latest chapter also makes it clear that there is plenty of room for this sports storyline to grow in the future.

Rather conveniently, this also ties into High School Family’s second strength: its ability to portray the realities of family life and send a good message to its teenage audience.

Even if the core premise of this series is a little bit on the nose, you have to give it credit for exploring said premise in a realistic manner. At first, Kotaro (the son of the Ietani family, the only one of actual high school age) isn’t too pleased about going to school with his family: like most teenagers, he doesn’t even want to be associated with them.

Yet, over the course of the series’ early chapters, he learns to appreciate it. One turning point comes in chapter 5, when he does classroom clean-up duties with his sister Haruka: he can’t help but be impressed at how enthusiastic she is, and a private moment in the corridor has him admit that ‘Hey, she actually did a pretty good job.’ 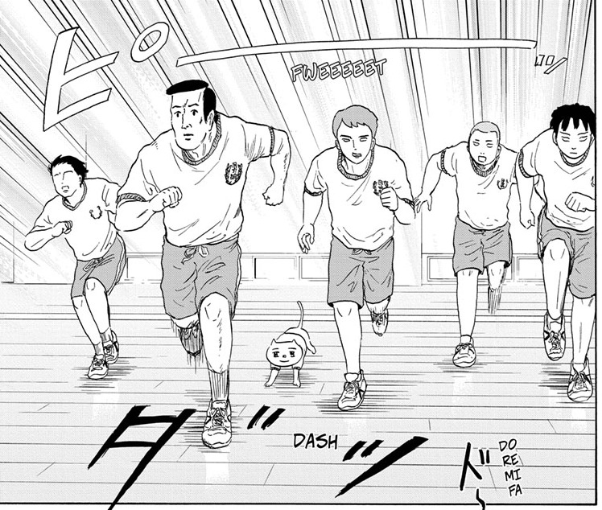 Then, in chapter 8, Kotaro and his dad Ichirou do gym class together. At first, he groans, saying ‘I never wanted to see my dad in gym clothes,’ but both he and fellow student Susumu can’t help but gawp at just how seriously he takes the exercises. He even suggests doing the shuttle run, even though he’s about twice his classmates’ age!

Teenagers have this terrible tendency to be embarrassed of their family and act like a stick in the mud: I know because I have a teenage brother, and I was a teenager myself once. Even so, High School Family very clearly tells the Jump audience here that it’s not all bad: lighten up a bit, overcome your angst, and there might even be something fun on the other side.

Admittedly, this emotional through-line is not as obvious as it appears to be here. Ryo Nakama’s ultimate objective is to deliver laughs, so much of this is only implied and hidden beneath the surface. What’s more, there’s no similar reconciliation between Kotaro and his mother Shizuka, which only furthers the feeling that she’s sidelined: it’s exactly the same problem that SPY x FAMILY suffers with, although it is attempting to rectify this in its latest arc.

On the whole, High School Family is pretty silly. Yeah, it’s basically what it says on the tin. Yeah, it isn’t nearly as interesting as Isobee Isobee Monogatari. And yet, there’s something about this series that just keeps me coming back, week after week.

Who knows? Give it a try, and you might find the same.

You can read High School Family for free via VIZ Media. Discover more weekly coverage under the tag Jump Time!