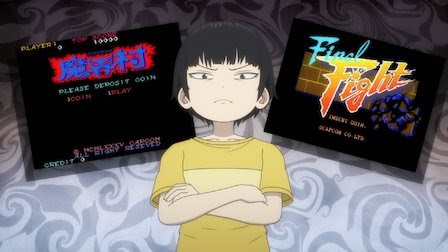 High Score Girl can be described as a romantic comedy that doubles as a love letter to the 90’s arcade culture. The story is set in the 1990s, and it stars Haruo Yaguchi, a skilled gamer who really has nothing else going for him. Akira Ono is everything Haruo is not. She comes from a rich family; she is beautiful, smart, and a skilled gamer as well.

At the beginning of the series, Haruo has a pretty huge ego due to his status as a pro gamer.

When Akira enters the arcade scene, she destroys him in a game of Street Fighter. After a series of games between the two that ends with Haruo losing, he resorts to using a cheap trick to win a game against her.

Appalled with his poor sportsmanship, she slaps him in the face. This triggers the beginning of their rivalry that leads to a great friendship between the two and an eventual love triangle.

Haruo Yaguchi is a young boy at the start of the series whose ego is bigger than him, even though he’s bad at everything that is not related to gaming. This makes him rather obnoxious. As the series progresses, he grows out of this after several defeats at Akira’s hands. This allows his kind and determined personality to break through to the audience.

Akira Ono is a young girl who comes from a super strict, wealthy family. She does not speak and only communicates through her facial expressions, nods, and grunts. She is smart, skilled, and talented in everything she does. She uses video games as an escape from the crippling expectations her family has on her.

Koharu Hidaka is a young girl who devoted her life to studying before meeting Haruo. After she met Haruo, he introduced her to video games and she fell for him. She’s a very kind girl and is always there to support her friends. 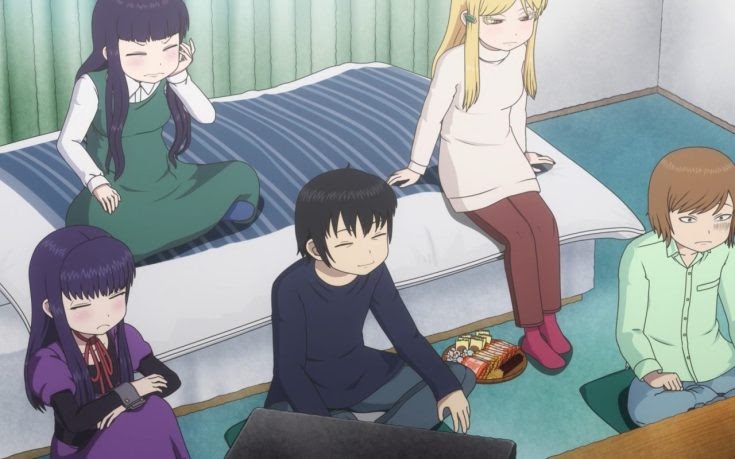 What Makes This Series Special?

Overall, it’s a very cute series and very funny to watch. This series is a must-watch for anyone who likes video games, romantic comedies, and who misses going to an arcade. The anime follows the manga page per page, so if you’d rather watch a 21 episode series instead of reading a 63 chapter series, the anime is available on Netflix.

Almost everyone in the world has had experience with video games. Most people have a series that they adore. The show does a great job of showing the excitement that comes from the release of a new system, having a favorite video game, and caring about the characters.

The series takes place over a few years, and we get to see the evolution of gaming through the character’s usage of systems such as the Super Famicom, Sega Saturn, and the first Playstation.

Not only is this a throwback for people who were gaming in the ’90s, but it also documents the impact these systems had on the gaming world. Comparing those systems to what we have now is a testament to how influential video games and video game culture has become.

The love and care for video game characters is shown through the way Akira picks her mains. Whenever people say a character sucks, she sees the character’s sadness. She feels bad for them, so she takes it upon herself to prove that they don’t suck by defeating final bosses and winning competitions with these characters. This usually shocks everyone in the vicinity.

In the 1990s, there was no such thing as online play via game systems, so a lot of people played games at arcades and developed friendships there through their mutual love for gaming. The main appeal of the show is that it shows the influence that fighting games had on arcade culture.

For example, many arcades had their own set of rules that players had to follow for fair fights, and if they broke those rules, there were consequences. This is shown when Akira punches Haruo for using a sleazy move set during one of their fights.

The show does a great job at showing the love and excitement the characters have for new game releases. Whenever a new machine popped up at a location, gamers flocked to it and played. While the series put Street Fighter at the center of attention, the show also mentions Mortal Kombat, Tekken, Virtua Fighter, Final Fight, and many more games.

Even though the show revolves around the characters’ mutual love for video games, it is still a romantic comedy at its core.

In season one, we are introduced to the triangle. Akira and Haruo were in the same class in elementary school, but he never talked to her due to being intimidated by her family’s wealth and her intelligence. They end up interacting after Haruo accidentally activated multiplayer mode on one of Ono’s games.

Their first few interactions usually ended up with Haruo hurt in some way. However, the duo quickly became good friends after Haruo got sick, and Akira brought him his homework. Haruo learned that Akira was not allowed to have video games in her house.

This led Haruo to take her to a 10 yen arcade, which made her very happy. Shortly after, Akira had to leave for America, and Haruo gave her a pink ring at the airport. Akira was deeply touched by his act of kindness that she pulled him in for a hug.

Koharu meets Haruo in middle school after Akira left for America. Haruo introduces Koharu to video games, and the two become very close friends as well. Koharu becomes a force to be reckoned with as well.

Throughout her meetings with Haruo, Koharu develops feelings for him. Akira comes back to Japan after a few years abroad and is threatened by Haruo and Koharu’s relationship. Haruo is completely oblivious to this and his own feelings as well.

The rest of the series follows the oblivious Haruo and the battle for his heart. This leads to a showdown between the two females that shows more about each character’s respect for one another than whose feelings for Haruo are stronger. Haruo figures out his feelings eventually, and the series ends with his declaration of love to her.

Overall, the show is pretty wholesome, and it brings on a lot of laughs. It’s a must-watch if you enjoy light-hearted shows that revolve around video games. It is streaming now on Netflix.