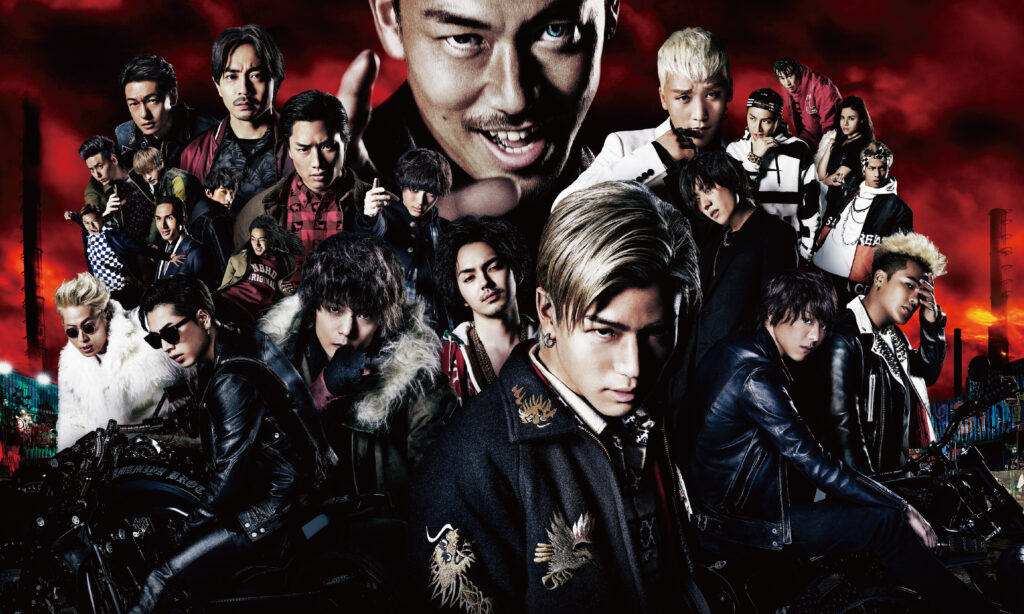 Franchises that cross over between different forms of media are rather commonplace in today’s entertainment landscape. From film adaptations or extensions of popular TV shows to massive interconnected stories like the Marvel Cinematic Universe and its winks & nods to the comics that inspired it, viewers are accustomed to seeing their favorite properties available in different forms. Then you have a project like LDH Japan’s HiGH&LOW which takes the concept to an entirely new level, with basically every format you can think of getting a slice of the story.

While it may seem like HiGH&LOW is nothing more than a vehicle for members of the massively popular EXILE TRIBE family of performers to flex their acting muscle, the story being told is actually rather expansive. Fans of action movies will have plenty to love too because they manage to pack as many impressively choreographed battles into the movie as humanly possible. The end result is a multimedia franchise that has built in five short years what some studios spend decades trying to establish.

Not so long ago, the films that make up the core of the franchise were added to Netflix worldwide, so what better time is there to take a look at how it’s used so many different creative mediums to build the world that the story takes place in. There’s a lot to take in, so let’s just jump into it.

HiGH&LOW started in 2015 as a drama series on NTV in Japan. Made of two ten-episode seasons, HiGH&LOW: The Story of S.W.O.R.D. tells the story of a territory that was established following the dissolution of a powerful organization called Mugen. Five groups came together to protect the territory known as S.W.O.R.D. which is under attack by the Kuryu Group yakuza organization. This drama takes on the weighty task of introducing not only the world of HiGH&LOW, but also its massive cast and each of the different gangs involved in the conflict.

The production of this drama is unlike what you would normally see on TV in Japan, with action and fight scenes getting just as much screen time as the drama itself. With such a strong emphasis on action, it would only stand to reason that a film was on the way, not only to expand the story but also to deliver a bigger budget spectacle. HiGH&LOW The Movie made its debut in May 2016 and expanded the scope of the franchise.

The reception to both the drama and the first movie has led to a continuous stream of new content in both mediums, with an additional three drama series airing through November 2019, and a total of seven movies currently released. Elements of these additional entries take inspiration from other mediums and bring them to the big screen, the most notable of which being the HiGH&LOW THE WORST, which is based on a crossover with the world of Hiroshi Takahashi’s high-school delinquent manga series. A new series following up on that crossover was recently launched in Japan titled 6 from HiGH&LOW THE WORST, a more drama-oriented story that follows six childhood friends that inhabit the world of HiGH&LOW.

With so much to consume, it can be a bit daunting to follow it all and know what order to watch everything in. With at least the movies available on Netflix, you should watch them in this order if you want to follow the chronology of the story:

Note that ROAD TO HiGH&LOW is an edit of the original two-season drama cut to film length and can be rather dense in terms of all the details it covers over its screen time. This may be too much for viewers who are new to the franchise, and HiGH&LOW THE MOVIE has a recap at the beginning as well, so if you want to jump into the action, that’s also a solid starting point!

Speaking of manga, HiGH&LOW has a few of its own, which add to the world and story built by the live-action series. Not to be taken lightly, the artists who created these manga are all prolific and highly respectful in their own right, which when adapting a story like this is an absolute necessity. The first manga released was an adaptation/companion to the first TV drama series and shared the same title. Handled by Sugarless creator Masami Hosokawa, it ran for twelve chapters in Bessatsu Shonen Champion in 2015-2016 and has been collected in three volumes.

Following up the HiGH&LOW: The Story of S.W.O.R.D. manga, another series ran in Weekly Shonen Magazine in 2017. Titled HiGH&LOW g-sword, this original story tapped legendary manga creative group CLAMP for its production. Taking a different direction from the first manga, this series has an art style that is unmistakenly CLAMP and the stories are more light-hearted in nature. The formula proved to work well as it was spun off into a series of short animations, and collected on a DVD which was available with volume five of the series.

The third manga that’s been released focuses on one of the series’ primary trio of characters, DTC. This time illustrated by Me and the Devil Blues and Prison School creator Akira Hiramoto, DTC Original Another Story ran in Weekly Shonen Champion as a one-shot in 2018. Despite having a more serious art style, this particular story featured the same kind of light-hearted tone of the CLAMP g-sword series.

Also an original story, as mentioned earlier, the live-action HiGH&LOW THE WORST movie and related THE WORST Episode.O are a collaboration with the manga by Hiroshi Takahashi. While not specifically set in the same world as HiGH&LOW, the characters from the manga are brought to life in this crossover series and make the manga worth mentioning as something to check out in relation.

Unfortunately, at the time of writing this none of the HiGH&LOW manga series are available in English, but you never know what the future holds. THE WORST, on the other hand, has been licensed by Digital Manga Publishing for an English translation.

With HiGH&LOW being so rooted in the EXILE TRIBE family, with many members playing primary roles in the series, music was undoubtedly going to play a major part in the franchise. In the live-action movies, LDH’s family of artists contribute directly with the theme songs for the many gangs throughout the story. Original songs from J Soul Brothers III, Hiroomi Tosaka, PKCZ, Doberman Infinity, Generations, and more play out alongside each of the different gangs.

It doesn’t stop with just the theme songs for each gang; an even wider roster of LDH recording artists contributing to the series as well. Everyone from THE RAMPAGE, to HONEST BOYZ, to Salu, and more contribute to the soundtracks for the films, with many of these original tracks being released as singles in their own right. A stand out track, in particular, is the theme song for the in-universe gang MIGHTY WARRIORS by PKCZ which, on top of rappers like CRAZYBOY and SWAY, also features Dutch electronic music superstar AFROJACK as a collaborator.

With music and musicians being involved in the project, a tour and live events were bound to be a part of the bigger picture as well. A full-blown tour for the project took place in 2016 based on the first film and was released to DVD & Blu-ray in 2017. In addition to that, special events which also featured live music have been held in conjunction with each film that has come out. These premium live events have been held in massive venues throughout Tokyo, Yokohama, and Chiba, with the most recent taking place at the tail end of 2019. 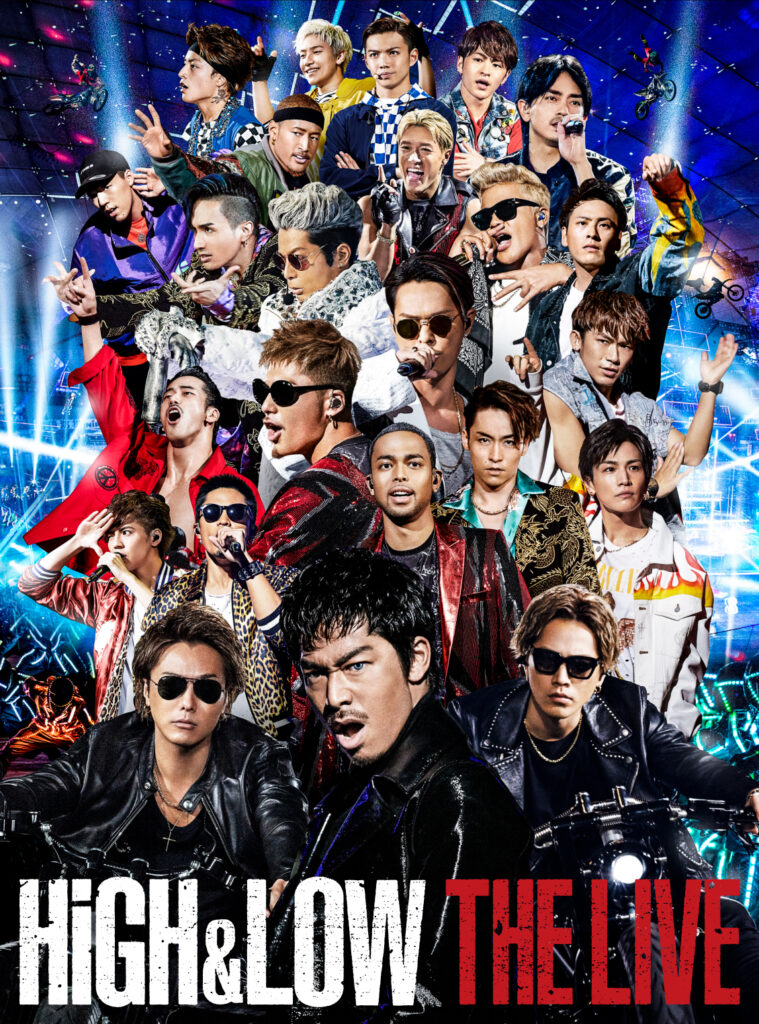 Last but not least in this massive multimedia landscape, a Japan-only mobile beat-em-up/action RPG was released in 2019 for iOS & Android, which puts you in control of a variety of the characters from the series. You play out through an original story featuring many of the gangs from the movies, shrunk down to fit your smartphone’s screen with a fittingly-cute art style. Surprisingly enough, this is the only game released for the franchise, despite how well the story lends itself to the format. It works well as an entry on mobile, especially if you’re in Japan and regularly commuting by train, and the beat-em-up style gameplay matches the fighting oriented action of the rest of the series.

So after taking all of that into account, I think it goes without saying that HiGH&LOW has accomplished a lot since its debut in 2015. It’s easy to look at all the content that ties into the franchise and just think that it’s just for the sake of making money, but when you consider the execution of it all, it actually feels a lot more thoughtful. The members of EXILE TRIBE who bring these characters to life all have actual acting chops (with many regularly appearing in stage plays and dramas in Japan), and the way the different mediums bring everything together feels well calculated. Nothing is forced, and everything compliments each other well. It’s only a shame that much of it is still only available in Japan.

Thankfully, as I stated earlier, the seven films that make up the core of the franchise are available to watch worldwide on Netflix with English subtitles, so I would recommend checking them out. I know I didn’t dive into the story too much (as that wasn’t the point of the article), but with the series enduring as long as it has with so many entries, I think that speaks to the entertainment value. Even if you’re not specifically an EXILE TRIBE fan, you may find yourself pleasantly surprised.

other Fumiaki Nishihara 2 years ago