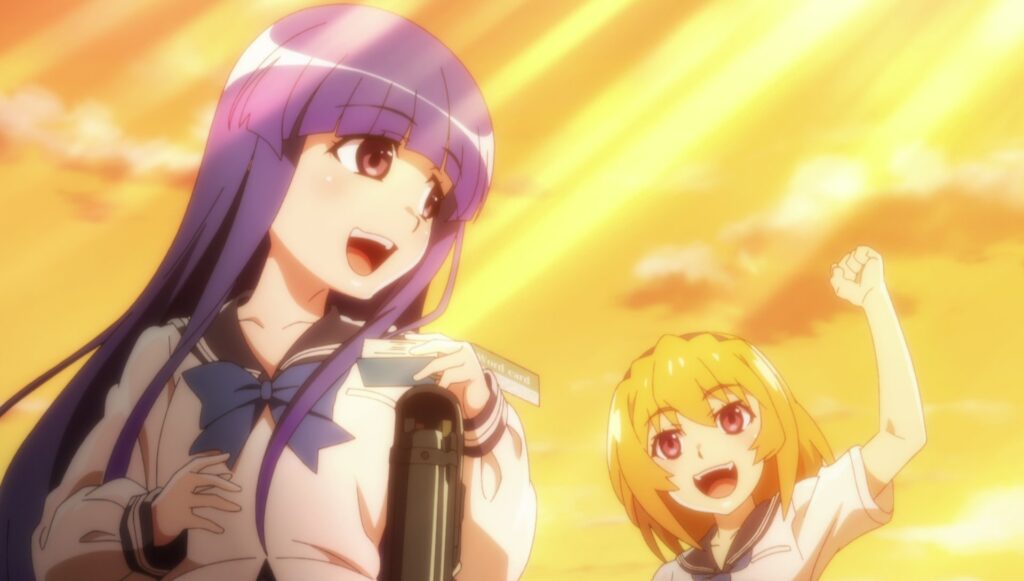 Ever since episode 2, it was clear that Higurashi When They Cry: Gou was much more than it initially seemed. Far from being just a simple remake, this was actually a sequel, seeking to continue and expand upon the original anime series. Yet, the very prospect of doing so immediately raised concerns, as the original story already left off on quite a satisfactory note.

With this in mind, the question is: was it worth it? Was there really any point in continuing the story, breaking open the once-sealed catbox of Hinamizawa in the process? Not really, even though it might fill in some blanks for When They Cry nerds such as myself.

Contains spoilers for the entirety of Higurashi When They Cry: Gou.

The last time we discussed Higurashi Gou was right after the Watanadamashi arc, where changes were being made to the original Watanagashi-hen for seemingly no reason. The next arc (Tataridamashi-hen) also made yet more confusing changes: Keiichi got very close to saving Satoko, almost like Minagoroshi-hen, only to be murdered by a delusional Oiishi straight after. Afflicting one of the only characters who has never been infected with the Hinamizawa Syndrome before was a bold move, prompting intense speculation as to why.

Towards the end of the next arc (Nekodamashi-hen), we got our answer: Satoko had also somehow obtained looping powers just like Rika, and was using them to meddle in the situation. Episodes 14 through 18, in particular, are pure suffering as Rika suffers again and again cruel deaths… culminating in the horrific scene where Satoko uses the Watanagashi ritual hoe to eviscerate her.

Gore has never been part of the appeal of Higurashi for me, but I remember that it was for my twelve-year-old friends on DeviantART back in 2007: in this sense, Higurashi Gou was dangerously close to aping a very surface-level understanding of the story. Luckily, in hindsight, we can see that all of these gorey scenes were supposed to underscore just how determined Satoko was to break Rika’s will as we headed into the final, almost entirely anime-original arc, Satokowashi-hen.

So, why was Satoko so determined to break Rika’s will? As it turns out, Rika wants to leave Hinamizawa for high school and go to the prestigious St. Lucia’s Academy: this is more than understandable given that she just spent more than 100 years trapped in the tiny village. But the big problem is that she wants Satoko to go with her.

Satoko isn’t all that good at studying, but she’s willing to apply herself and suffer through more than a couple of all-nighters to pass the St. Lucia’s entrance exam. Yet, when they both get there, Satoko struggles to keep up; meanwhile, Rika is in her absolute element. As a result, Satoko feels isolated and alone… betrayed, even, as Rika finds other friends, which is when a certain magical being appears, promising her special powers.

Understanding Satoko’s actions during this part of Higurashi Gou is quite easy, as Rika did promise that they would be together forever. Nevertheless, her decision to then actively dissuade Rika from going to St. Lucia’s by making her suffer seems quite out of character: isn’t she her best friend? Why wouldn’t she want the best for her? Plus, now that she also has looping powers, can’t she understand why Rika would want to leave Hinamizawa?

The dilemma that is presented to the audience also seems like a bit of a false dichotomy, presenting the two ideas of going to St. Lucia’s or remaining in Hinamizawa as in opposition to each other. Can’t Satoko just say to Rika, ‘Hey, I don’t think I’d fit in there, but you go ahead.’ It is worth noting that she actually tries to do so in episode 22, but Rika protests: Satoko’s immediate reaction is to then kill herself and restart the loop, which seems a bit silly. There surely was more discussion to be had, even if it might have taken a while! As a result, the entire concept for this final arc of Higurashi Gou feels a little half-baked.

That being said, the point of all this could be to fill in some of the blanks in the wider When They Cry universe. In Umineko, Bernkastel and Lambdadelta are heavily implied to be some sort of versions of Rika and Satoko, if never outright explained. This made sense for Bernkastel, given that we knew Rika had looping powers, but how Satoko transformed into Lambdadelta has always been a little unclear. Higurashi Gou could, therefore, be acting as a sort of origin story for the character, possibly with the aim of doing an Umineko anime remake in the future.

But did we really need this spelled out for us? And was it really worth potentially ruining the relationship between Rika and Satoko to do so? Not really, because the characters worked well in Umineko, anyway. Breaking open the Hinamizawa catbox again after all these years ultimately feels like a mistake, but it remains to be seen whether Sotsu can correct this.

You can watch Higurashi When They Cry: Gou via Funimation.