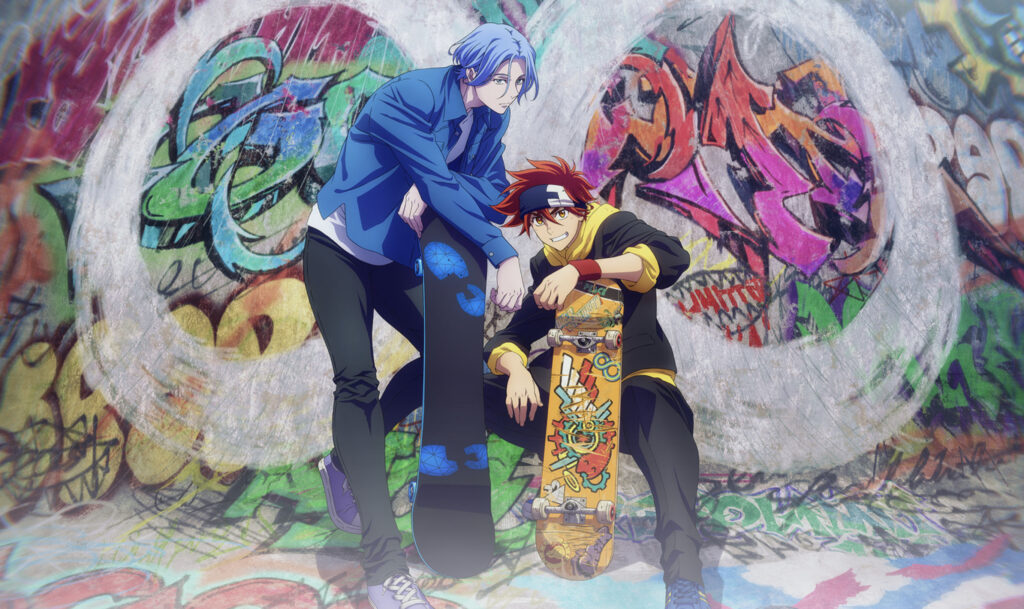 Known for her work on the likes of Free and Banana Fish, both series that she directed that earned deserved praise from all sectors of the industry and its fans, the news that Hiroko Utsumi was set to be working on a new original series with Studio BONES was enough to prick my ears to attention. Whatever she had planned next, it was something I’d at least want to keep an eye on and see how it developed, so I was excited to learn what direction her latest anime would take when it was revealed over this past weekend. This anime is called SK8 the Infinity, an original anime about skateboarding with an interesting art style.

SK8 the Infinity (pronounced Skate the Infinity), the anime will follow Leki and Ranga. Leki is a second-year high school that gets caught up in ‘S’, an underground skateboarding circuit taking place in an abandoned mine. Ranga has just returned to Japan from Canada and also gets dragged into the situation despite having never skateboarded before. These races are extreme, with no rules, racers who’ll do anything to win and even AI racers that all compete together in skateboard racing battles.

The closest point of comparison to this anime in Utsumi’s catalogue of work would be Free, since both have a sporty edge to them. Even then, SK8 the Infinity has greater roots in science fiction than the more realistic tones of Free, making this not just an interesting anime from a conceptual basis but a new challenge for Utsumi to tackle. Assisting her on this series is Ichiro Okuchi who is the series scriptwriter, Michinori Chiba taking on the role of character designer and Ryo Takahashi who is handling the music for the series.

More information will be released at a later date ahead of the anime’s January 2021 premiere, and Aniplex of America will be handling the show’s international distribution. You can find out more about SK8 the Infinity over on the anime’s official website.

Review: SK8 the Infinity Episode 1 – Snowfall on a Hot Night