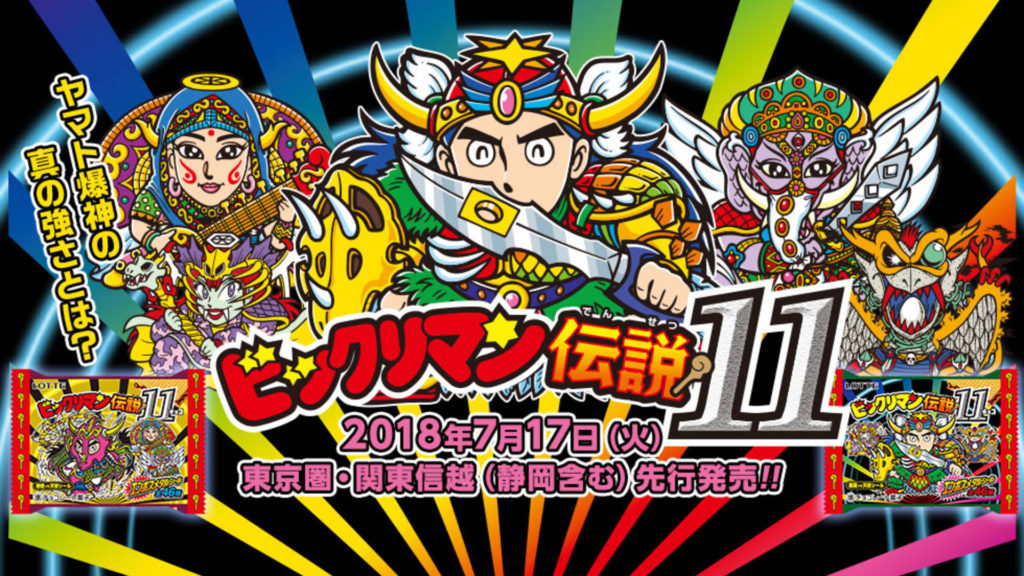 Candy manufacturer LOTTE is known for a wide variety of delicious snacks and treats, with few being quite as prolific as Bikkuriman. Just last month it was announced that their latest collaboration was bringing a rather unexpected figure from the global streetwear scene in to produce the 11th entry in the “Bikkuriman Legends” series. Hiroshi Fujiwara, a legend in the streetwear community often credited for bringing the Ura-Harajuku fashion style to prominence, has teamed up with Lotte to create special Fragment Design (the name of his studio) versions of popular rare series characters Zeus and Tenshi. The “frag” versions of these two characters are available in standard color versions as well as black & gold chase versions, with the set having released on July 17th. If you’ve ever been to a Japanese supermarket and bought snacks there’s a pretty good chance you’ve come across Bikkuriman. The chocolate & peanut filled wafer cookie has been a staple for children across Japan since its introduction in 1977. Originally packaged with stickers referred to as “seals” featuring real-world items on them intended so that kids could use to play pranks on their friends, the snack really hit its stride in 1982 when it introduced the “Akuma vs. Tenshi” series of original character seals. This new line of seals included a story element that would be expanded upon by collecting more from the set and focused on mythology from all around the world. The product was so prolific for a time that it became a concern across Japan due to acts of childhood delinquency such as theft along with concerns about the growing value of specific stickers leading to gambling addiction. Over the years Bikkuriman’s manufacturer, Lotte, has figured out a way to circumvent these issues and grown the product into a complete powerhouse which has spawned several anime series, video games, and collaborations with prolific properties & real life people. My first encounter with the news of Hiroshi Fujiwara’s involvement came with some updates he made on Instagram over the past few weeks. I didn’t give them much thought at first, but after looking into it a little more I was determined to get all of his contributions. Upon my recent arrival back in Tokyo last week I rushed out to find as many of these tasty snack/sticker combos as I could, ultimately scoring myself one of the black/gold chase Frag Zeus seal in my 3rd wafer cookie pack. As a collector of a variety of Japanese pop culture goods (including many of the past Bikkuriman collaborations), these new seals immediately appealed to my sensibilities thanks to the design crossover along with the proliferation of the product. I often see older series seals for sale at shops like Mandarake, with some fetching 100,000jpy or more on the second-hand market! These special collaboration seals definitely have a lasting appeal in my opinion, and if you’re a fan of great character design as well as the concept of the collaboration with someone as prolific as Hiroshi Fujiwara, you should definitely be on the lookout for this series. Be sure to make sure you’re picking up the right set if you do decide to hunt, there are also currently new series featuring characters from Kemono Friends and the long-running Kingdom manga property floating around as well! It’s also hard to say how available this edition will be available, especially with the additional allure of the “frag” versions of popular characters bringing more attention from outside the typical fanbase. Bikkuriman Legend series 11 is available now all over Japan for around 100jpy per package.

Hiroshi Fujiwara Takes Over the Art Scene with Fragment