Make no mistakes! Hiroya Oku is an absolute master-class creator whose major works have and will stand the test of time. Despite all the blood, perversion, and weirdness that seeps into the brunt of his comics, they’re always utilized with reason and purpose. His two most famous series, the seminal alien-battle manga Gantz and the ‘old man becomes a superhero’ Inuyashiki have been great successes In Japan, with both series seeing wide readership and receiving both anime and live-action film adaptations. To this day I still hear people all over the world cite Gantz as one of the best. Even within the last two weeks, when I spent some time with a German studying abroad in Japan they named the infamous work an all time favorite. Those two comics didn’t just stick with people only because of their gratuitous violence; it’s how that violence was used to expose the human condition and strike at the hopes and fears beneath. That’s what Hiroya Oku does best, and after previewing an upcoming work, I’m at least tantalized about how he may do this next. 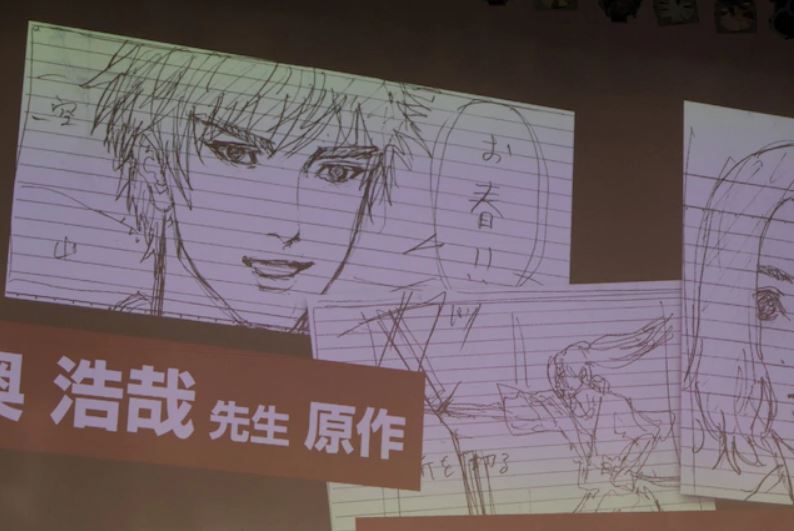 Maybe it’s not much of a preview yet, but last weekend at an event centered around Young Jump magazine Hiroya Oku previewed these illustrations for an upcoming series to be released in the magazine sometime in the future. Weekly Young Jump has been home to many incredible comics over the years like Tokyo Ghoul, Golden Kamuy, and Oku’s signature Gantz. It’s part of the same Jump family that One Piece and My Hero Academia are but it skews to an older audience with most of its manga fitting in the broad ‘seinen’ category. Fewer restrictions and fewer formulas to follow means that with this new comic once again Oku can let loose on his readers.

We don’t know much about the new series yet. Only that it’s a Young Jump title and will be a Japanese historical manga; You can see the traditional clothing clad person wielding a katana above. Whether this’ll be strictly a samurai story of just a tale that takes place during the Edo period or before is yet to be seen. Something like Blade Of The Immortal could be on our hands or this really just may be more period piece drama territory, although with Oku’s history and talent for action I doubt it. This all said while the plot and exact subject material hasn’t been revealed yet, even from what little readers have been offered so far we can speculate as to how a historical manga from the mad genius behind Gantz itself could be an engaging if not significant work. 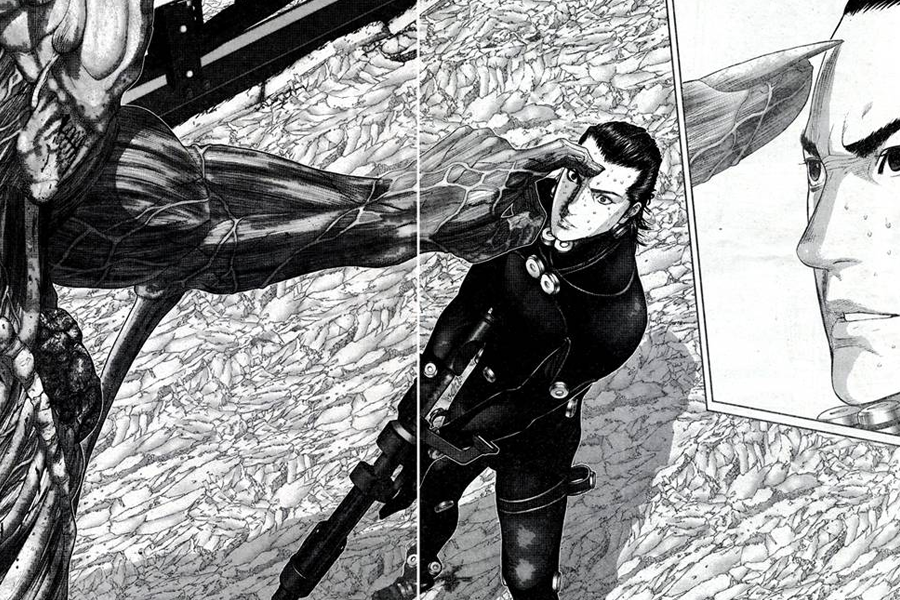 As I stated before, Hiroya Oku’s real talent is the latent human quality and all the good and bad that comes with that in all his works. Gantz is a comic that constantly teeters the line between nihilism and fighting back in the face of nihilism. Inuyashiki, a little simpler, shows that even in these new, increasingly complex and alienating times a person can and should do good. Oku even did a short series while making Gantz called Me-teru no Kimochi which was about a Hikikomori, a serious shut-in, gaining the courage to reintegrate with the world. Oku always has something poignant to say or meditate on even if he’s dressing that message up with over the top fan service, excessive gore, and a heavy dose of eerie.

In a very important sense, his manga are very realistic. Not the concepts per say, human civilization has not yet reached the point where they can send dead people to fight aliens nor can we turn cancer-ridden old men into robotic superheroes. It’s the way the Hiroya Oku depicts human interaction and reaction that hits so close to home. Many of characters joke about who they want to sleep with, read manga and pornography, and are genuinely selfish until whopping doses of life and death happen to them. It comes off way less in an anime over the top way, like our friend the Great Teacher Onizuka, and more like your real-life high school scumbag type of person. There’s also a physicality to his manga that, despite the organs flying around, how bodies move and react in real life. The expressions his character’s faces make are also similarly, while not drawn in a real to lifestyle, are realistic in how they contort and change. I’ll never forget the first time I read this small scene in Gantz where a character named Tae gets hit in the face and the frightened look she gave after was so convincing while not being the least bit exaggerated that it hit my core. 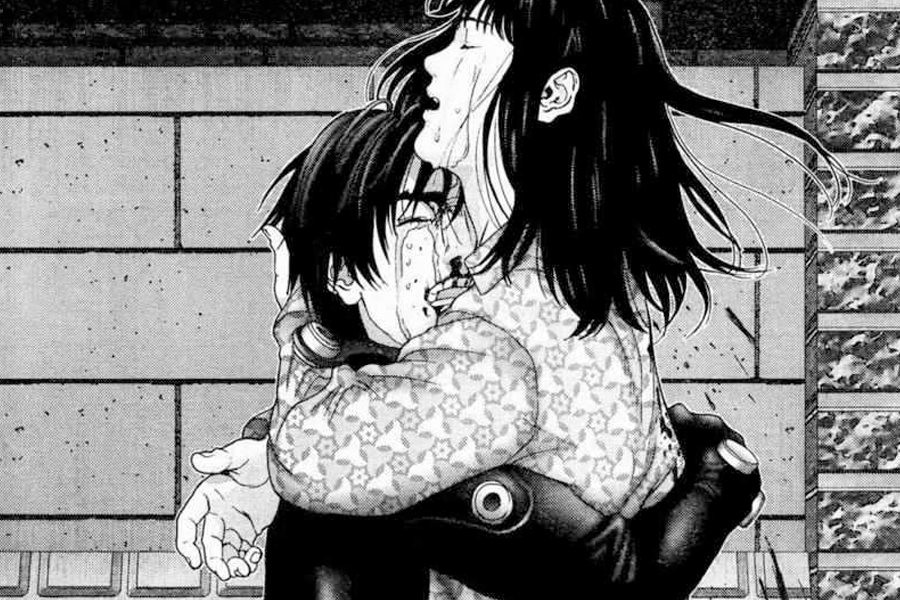 Gantz and Inuyashiki both get ‘we live in a society’ by their ends but do so successfully. While I haven’t read Oku’s latest series Gigant, it’s hard for me to imagine Oku dropping his penchant for realism and societal commentary in his newest work. He might be choosing to go the historical route to say something about modern Japanese culture through the lens of old days, or he might be choosing to turn back the clock to analyze certain aspects of Japanese society and how they came to be. I don’t mean to imply that Hiroya Oku only has morals or philosophical musings he wants to impart; it’s clear he enjoys telling insane stories and going off on the action along the way. There’s always something behind his tales though and I’m very excited for whatever nonsense he wants to drench me in next. I’ll eat it up.

The man’s also one of the most talented illustrators out there. While maybe not the first person to do it, Oku pioneered using CG in manga which is way more common than you’d think. Of course unless it it’s a period piece with a sci-fi twist, there’ll be less of a need to use CG to create unearthly guns and alien-spaceships, but that just means we’ll get more of his incredible penmanship. Like many long-running famous comics, the first chunk of Gantz  looks a little rough, but when he finally began to streamline his style every page became an accomplishment. Again, not in terms of character design, but in the way Hiroya Oku’s creations move and fight opt for realism within surreal situations, there’s no one else out there that quite has his touch. I’d be very interested to see samurai duking it out in the way Oku does battle. 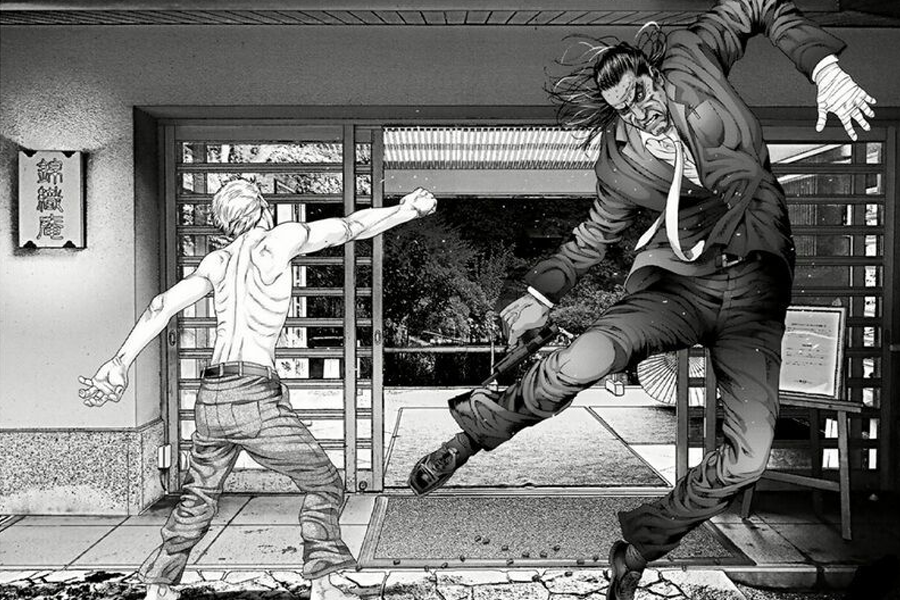 While we assume Hiroya Oku’s new series will hit Weekly Young Jump next year, there’s no release date or title yet. He’s still working on Gigant, a manga about a tall girl in Big Comic Superior, so it may be a while before we see this one come to light. That does also, unfortunately, means an English release is even further off. Still, I can not stress enough that this will be something to keep your eye out on. If you haven’t read Inuyashiki or Gantz, you’re missing out on two of the wildest comics the medium has to offer. We do have to add a caveat in that you should absolutely be over the age of 18 if you’re looking to get into these works, they aren’t for young eyes. Here’s to the next decade of manga starting off strong!

Hiroya Oku will (probably) return to Weekly Young Jump next year, and his comic Gigant is currently being released stateside by Seven Seas.

Oshi no Ko and A Couple of Cuckoos Unveil ‘Miracle’ Collaboration