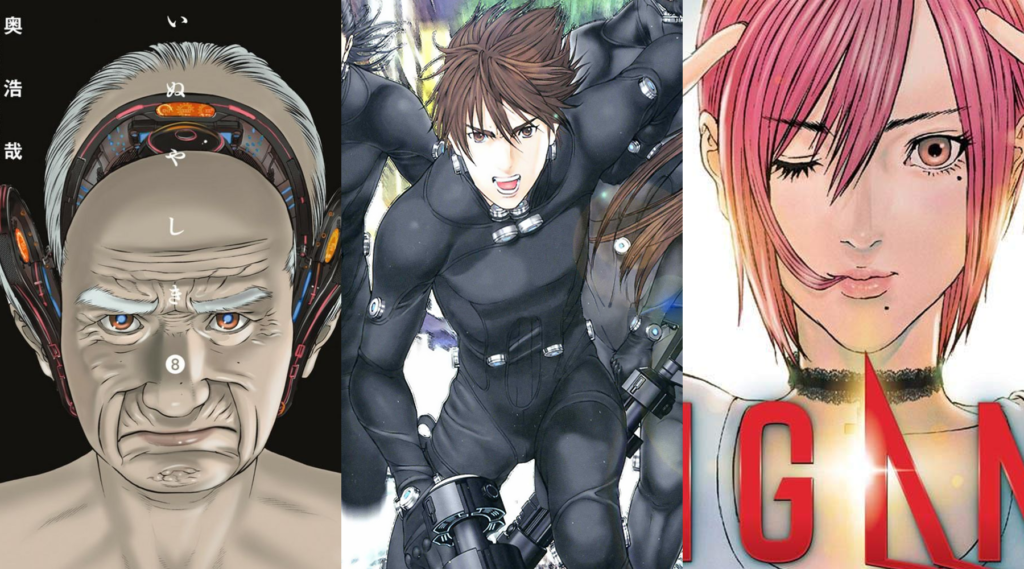 Our ‘Know the Creators‘ column exists to shine a light on mangaka, animators, and other Japanese pop culture creatives who’ve accomplished much but lack the instant name-recognition they deserve amongst modern sub-culture enjoyers.

His name is synonymous with the notorious and best-selling Gantz, and plenty of readers have at least encountered his name and some of his works.

However, one worries that despite his by-the-numbers success, Oku doesn’t get the recognition he deserves for his absolute innovations in manga art and the societal observations found in his comics that openly address all sorts of ugliness in modern reality anime and manga so rarely touch.

If you have read his works and thought ‘oh neat gun’ or ‘why is this so gross’ without a second thought, continue on to find out what you’ve been missing.

Hiroya Oku decided to become a manga author the day after reading Osamu Tezuka’s The Vampires in the fourth grade. Tezuka’s influence would linger years later, with Oku taking inspiration from the Hollywood Astro Boy movie to create Inuyashiki.

In his adult life though, he’s more of a movie Otaku than anything else, and even goes as far as to call ‘Hollywood’ his rival, though he’s gone on record saying he’d be extremely happy to see a big-budget adaptation of his works..

He started submitting one-shots to magazines in high school, and before finding his own success, Oku worked as an assistant to cult-manga creator Naoki Yamamoto, whose works also routinely delve into dark and taboo territory. He claims to have pioneered a ‘nipple-blurring’ technique in an old title of his called Hen (Japanese for ‘weird’), but we’re opting to not do the research on that one.

Most mangaka are lucky if they can cultivate either an artistic style they can truly call their own or foster a unique narrative approach. An obscene one, sure, but Hiroya Oku succeeding at both makes him some kind of genius.

Focusing on his artistic style, Oku was an early adopter of introducing CG production into manga for functional but also stylistic purposes. His elaborate city habitats mixed with contrasting blurs imbibes a realism integral to Gantz and his other major series. He specifically has a rule of hand-drawing all ‘living beings’, from people to shape-shifting demons, so he can properly express the ‘life’ in their being. In his own words, he strives to express ‘the flesh of human hands and faces’ to impart real viscerally to his creations.

Plenty of other mangaka attempt to address societal and political issues in their work, but none makes us confront how ugly we are by simply holding up the mirror like Hiroya Oku does. Sure, his manga routinely partake in over-sexualization and explicit gore, often crossing straight into depicting taboo and problematic occurrence without obvious admonishment, but it’s a mistake to say he’s just getting his rocks off.

We do live in desensitized society and while plenty of us rightly point at institutional harm and violent crime as wrong, all millionaires and zoomers grew up overexposed to this kind of industry thanks to Hollywood and the internet from birth.

When a side character in Gantz says ‘chopping this guy’s arm off rocks’, that’s not Oku actually saying violence is ok in real life, but he is just being honest about the fact that these lines of thinking exist and need to be contended with.

With Hiroya Oku only having three major works available in English, it makes our job of giving you three introductory points to get into an author’s work pretty easier this time.

Make no mistake. Each of these manga brings packs in worthy amounts of wild spectacle, insane story-telling, and begrudgingly apt societal commentary. You’ll come out the other end of the combined 50 or so volumes of these three works a new human.

With its 24 odd million copies sold and infamous reputation, chances are you’d heard of Gantz before reading this article. It is the definitive seinen tale which pits the recently departed in a series of never-ending death-matches against increasingly powerful aliens for a chance to come back to life, while portending a giant conspiracy about how any of that works.

Most people love, or hate, Gantz for its excessive ultraviolence and indulgence in borderline softcore pornography, but you’ll find so much more than indulgence in its ink-soaked 37 volumes. A juxtaposition between modes of youthful disillusionment and struggling to survive culminate in a long, intentional meditation on whether one should bother to waste time fighting in the face of certain futility.

Perhaps more people would realize this if the dang series got the remake it deserves already.

‘Let’s take a kind-hearted old man unappreciated by his family, turn him into a cyborg, and have him protect innocent citizens from a teen so jaded he starts murdering for fun, also a cyborg.’

Inuyashiki sees an attempt by Hiroya Oku to create a more outwardly wholesome and less morally ambiguous manga without sacrificing his trademark skepticism. You could argue this embraces some boomer mentality, IE old man good kids bad, but that’s too surface level of a take.

The manga honestly addresses all too real social phenomena, like people becoming disconnected from their families and feeling alien towards a world that makes little sense. It all does all this with some very polished and kinetic urban sci-fi action to boot.

Hiroya Oku took all the goodwill he cultivated in Inuyashiki and threw it right in the dumpster to make Gigant.

An AV star named Papico suddenly gets the power to change her size at will and starts fighting off giant monsters and other assorted threats. These seemingly materialize out of nowhere through a mysterious app called ‘Enjoy The End’, which allows its users to vote on highly destructive and lethal reality bending events. Papico also gets involved with a high-school boy; highly illegal, but hey, at least he treats her much more appropriate than her former abusive boyfriend!

Gigant’s absurd, Papico’s fully naked more often than she isn’t, and it almost feels like Hiroya Oku’s satirizing himself, but all the same strikes at modern Millennial despair and nihilism in the social media age.