From Robots to Gunshots, Hiroyuki Imaishi is Anime Royalty 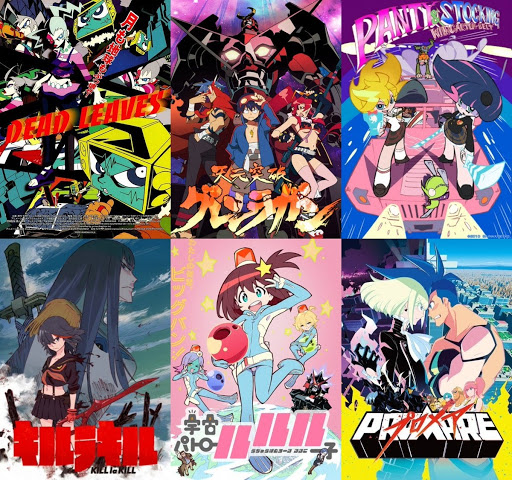 Imaishi has an art style that gets the blood pumping. It’s fast-paced, wild, aggressive, and drawn with plenty of moving parts, usually too quick for the human eye to follow. That insanity and fearlessness is his signature, and it’s earned him plenty of attention over the past 25 years.

His catalog of work is nothing to sneeze at, and the works he’s directed during his time with Studio Trigger prove that his lack of subtlety is his strength. Above all else, Imaishi wants to give his viewers a hypersonic experience they won’t soon forget. He also thoroughly enjoys confusing people, claiming that he wants you to understand the plot–but just barely.

Let’s be honest, your career is on the right track when you start as an animator for Neon Genesis Evangelion.

Anime was the Goal from the Beginning

Plenty of people take time to figure out what they want in life, but Hiroyuki Imaishi was never so indecisive. Wanting a career in the anime world, he was originally inspired by the 1979s game-changing mech series Mobile Suit Gundam. Following this discovery, he practiced his art skills drawing doujinshi, before moving on to publishing commercially for a very brief time.

After graduating from college, Imaishi began his storied career with Gainax. At that time, the company was in its beginnings, known mostly for the Gunbuster OVA (1988), Appleseed (1988), and Nadia: The Secret of Blue Water (1990). Otaku no Video (1991) has also remained a cult classic.

In 1995, Gainax hit the jackpot with Neon Genesis Evangelion, for which Imaishi worked as a key animator. From there, he branched out into animation direction and storyboarding for the company, until he left to form Trigger in 2011.

When working with others, Imaishi admits that he enjoys taking the helm in his own way. Pulling apart other writers’ scripts, he puts the pieces together in his own style. When working as an episode director on episode one of Re:Cutie Honey in 2004, he met Kazuki Nakashima, the screenwriter. The two hit it off, and it was due to this meeting that some of Imaishi’s most famous works came into creation.

Imaishi is also greatly inspired by the late Yoshinori Kanada, who worked on classics such as Galaxy Express 999 and GeGeGe no Kitaro, as well as on many Ghibli works including Princess Mononoke and My Neighbor Totoro.

Imaishi’s Body of Work is Incredible

Following his work on Evangelion, Imaishi contributed to the short-lived but popular series FLCL as a director, storyboard artist, and key animator in 2000. Following this, he worked on Diebuster, also known as Gunbuster 2, and Paradise Kiss, animating the ending. In the romantic comedy His and Her Circumstances, he famously contributed to the manga-style scenes.

In 2004, Imaishi partnered with the animation studio Production I. G. to create the sci-fi film Dead Leaves. Easily recognized for colorful design and energy, it follows two aliens named Retro and Pandy struggling to regain their memories after waking up naked in downtown Tokyo. The two are arrested and sent to Dead Leaves, a notorious prison, where they meet even more of Imaishi’s bizarre and wacky characters.

For most anime fans, Imaishi is known for Tengen Toppa Gurren Lagann, released in 2007. His debut work as a series director, the show won a bevy of awards on release, including two from the Tokyo International Anime Fair: best television production and best character design. The mecha series ran for 27 episodes, and currently has a 100% rating on the Rotten Tomatoes website. It has been called one of the most lively series of the 2000s, and many applaud it for seamlessly combining drama, comedy, action and sci-fi.

Gurren Lagann tells the story of humans in an alternate future, forced to live underground by the Spiral King named Lordgenome. They must constantly dig deeper to avoid the earthquakes which rattle the planet daily. Two orphans, Simon and Kamina, search for a way to return to the surface, and to find a way to make peace with the robot-piloting beasts on the surface which obey Lordgenome’s orders.

After this masterpiece, Imaishi went on to direct the 2010 action-comedy series Panty & Stocking with Garterbelt. The show was inspired by a trip Imaishi took with the staff of Gurren Lagann: the team was on a quest to relax after their hard work, so they got drunk and chatted about what they would do with no creative restraints. Nearly every decision for the series was made during this trip, including the names of the main characters, ‘Panty’ and ‘Stocking.’

In 2011, Imaishi left Gainax to create his own studio, Studio Trigger, alongside fellow ex-Gainax employee Masahiko Ootsuka. After the groundbreaking success of Gurren Lagann, Trigger was the next step towards Imaishi having full autonomy over his works.

Studio Trigger released its first short film in March 2013, titled Little Witch Academia. Made for Anime Mirai 2013, it was well-received, and a second short film followed in 2015. A 13 episode anime series was made available on Netflix in June 2017.

The studio’s first original anime TV series was Kill la Kill in 2013, telling the tale of Ryuko Matoi, a schoolgirl on the hunt for her father’s murderer. Though it had some budget constraints, it has been praised for its creativity and music, alongside Imaishi’s classic mix of action and comedy.

In recent years, Studio Trigger has been responsible for more popular series, including Kiznaiver and Darling in the Franxx, the latter co-produced with CloverWorks of Fairy Tale and Dakaichi fame.

In May 2019, Studio Trigger released a full-length original animated film titled Promare. The movie was directed by Imaishi and written by Kazuki Nakashima, making it extremely promising to fans right out of the gate–the two had worked on Gurren Lagann and Kill la Kill together, and promised to bring their respective styles to the big screen. Critics immediately adored it, calling it “visually dazzling” with an “exhilarating narrative.”

The sky’s the limit for Imaishi and Studio Trigger. In fact, he already has what some would call a protege in Akira Amemiya, recently responsible for SSSS.GRIDMAN.

Where to Watch Imaishi’s Series and Movies

Before even thinking about anime series and films, fans should be aware that certain Hiroyuki Imaishi art books do exist for purchase. One of them is even free with Kindle Unlimited, titled the Believe in Yourself Charity Book; it features some exclusive Imaishi works drawn to inspire people after the Great East Japan Earthquake of 2011.

Gurren Lagann and Kill la Kill are both streaming on Netflix, Hulu, and Crunchyroll. Panty and Stocking with Garterbelt can be found on Amazon Prime Video and Funimation.