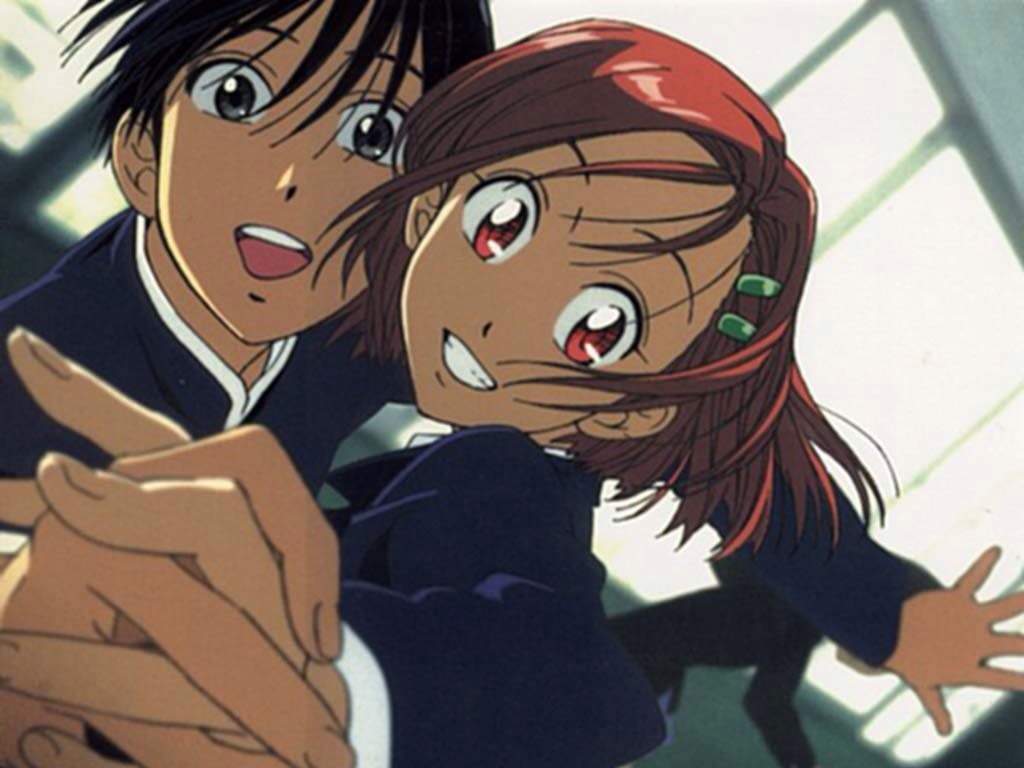 When you first see or hear the name Hideaki Anno, you think Evangelion. That’s only natural with how it’s remained a pillar in the anime culture for 25 years now. If you wanted to dig deeper you would probably cite the excellent Shin Godzilla or if you wanted to appear like you really knew your stuff, you’d invoke the Gunbuster name.

Maybe just maybe you would bring up Nadia if you’re a real old school fan.

Unfortunately, the show we hear brought up least in the Hideaki Anno conversation is, arguably at least, his second-best work to date; His and Her Circumstances aka Kare Kano aka the time Hideaki Anno took a good but very standard shoujo romance manga and turned it into Evangelion 2.

Hideaki Anno directed His and Her Circumstances right after finishing The End Of Evangelion. If you’ve seen that quite literally out of this world movie, you know its creator could not have been in a particularly balanced headspace.

Many of the same feelings that Anno brought into his most well-known baby Neon Genesis Evangelion, like anxiety and self-doubt among others, he plopped right into Kare Kano like it was the most natural thing in the world to do. The resulting anime is, to this day, a wholly unique entity born from the creative marriage of a classical shojo manga creator and anime’s greatest madman.

When we say ‘His And Her Circumstances is basically Evangelion High School’ we’re not talking about the plot. Nobody’s fighting off any mysterious entities in giant robots that are housing their mother’s souls.

We’re talking about the tone and direction. Despite nothing like it existing in Masami Tsuda’s original manga, Anno decided to continue with much of the same shtick he had been working with when creating Evangelion. Characters would often go on lengthy internal monologues not just questioning what their feelings were but truly digging deep into the underpinnings about how these feelings could develop and what was appropriate to do with them.

Often these thought rants were paired with a similar kind of visual direction that later episodes of Evangelion, you know when the series ran out of budget and did things like stretching out or repeating single images over and over. All the normal high school romance conventions were examined under Anno’s microscope and regurgitated through his unique lens, making Kare Kano a hell of a thing to behold.

Having your manga adapted by the Hideaki Anno is going to result in some creative differences whether the story details remain the same or not. Anno and Gainax decided to present a self aware and reflective take on the high school romance trappings of shojo in order to tread new ground and create something memorable. When His Or Her Circumstances wasn’t in its feelings, as the kids say, it was playing around with its comedy

Conversely, Masami Tsuda’s original shojo comic was a lot more of a conventional though self-aware work, and it addresses topics the anime didn’t get to. Namely, what happens after your relationship sets off? In particular, the boyfriend Arima goes through additional challenges, one of which being his increasing jealousy about his girlfriend Yukino befriending all sorts of people. Also being adopted, there’s a storyline later in the comic where his birth parents return to cause some emotional trouble.

Why The Original Manga Created Hated The Show

Imagine after slaving away for years, drawing page after page of comics every single day, hearing that for the first time one of your manga would finally be animated! Furthermore, your shojo baby would be adapted by Studio Gainax at the height of its popularity.

If you didn’t feel lucky enough already, you would probably faint after finding out that the one and only Hideaki Anno would be the director bringing your series to life, fresh off finishing The End Of Evangelion.

Because of this, you’d be guaranteed a huge boost in sales and popularity due to name recognition alone plus your comic was going to get an incredible TV run.

So why did original His And Her Circumstances author Masami Tsuda hate the final product? According to Gainax, they wanted to emphasize the ‘comedy’ part of the ‘romantic comedy’ equation which kickstarted some decidedly major beef between Anno’s production and Tsuda herself. Whether it was an intentional response to the author or just a result of Anno’s creative whims, the introspective and auter touch the director was known for only ramped up as the series went on.

The plot wasn’t even changed but with all the indulgent and depressive monologues very reminiscent of the second half of Neon Genesis Evangelion, Masami Tsuda’s baby was transformed from a traditional rom-com high school girls comic to an oftentimes challenging meditation on love and character. Again Gainax says the main dispute that led to Anno leaving the show two thirds through was because of the comedic focus, but rumors over the years have also circulated about her being displeased with the ‘Evangelionization’ of her work.

While that made for an excellent show we lament seeing fall through the crack, we can sympathize with Tsuda’s position.

The Troubled Production Of The Anime

What’s a little harder to swallow than original manga creator Masami Tsuda having problems with the genius Hideaki Anno adaptation of her work was what she eventually ended up doing about it. She was so unhappy with the direction the show took that she openly voiced her resentment before it was even completed.

That criticism coupled with some complaints with the TV Broadcaster forced Gainax to restructure how the anime would be made, with Anno leaving the project after 16 episodes. The reins were picked up by fellow Gainax staffer Hiroki Sato who tried his best to compromise between the original manga and what Anno was trying to do with it, but with a forced shift in focus in both tone and story with the last bunch of episodes centering around a different couple, Kare Kano had fallen apart by the end.

It’s worth mentioning that ultimately the anime only covered a small portion of the manga, that continued for 6 years after the anime wrapped up.

If you want to peek deeper into the lives of Yukino and Arima, albeit without that one of a kind introspective lens Anno lent to the work, there’s a whole lot more of Kare Kano His And Her Circumstances where it came from. With 21 volumes in full, Masami Tsuda’s work makes for long-lasting entertainment that any more traditional shoujo lover should peep out.