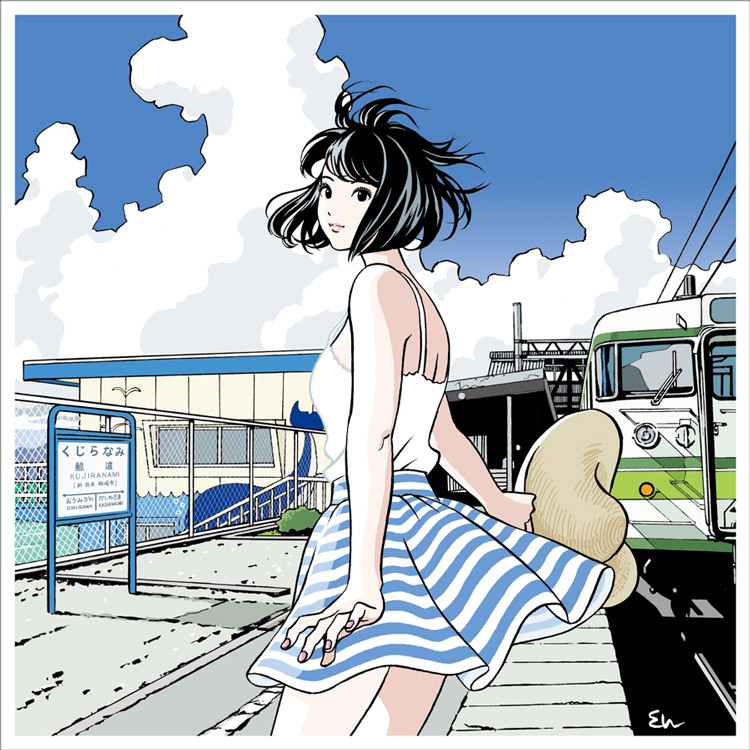 Few have successfully made the leap from humble weekly comic artists to internationally renowned illustrators as Hisashi Eguchi has. Sure it’s not uncommon for manga artists, particularly those with distinct visual styles, to dabble in things like poster and CD jacket illustrations with a number of greats like Inio Asano, Naoki Urasawa, and Hirohiko Araki all having done some graphic work.

However, no one else has so blatantly dropped one beloved series, said screw it, and began dedicating the rest of their career drawing pretty girls.

Hisashi Eguchi’s entire shtick is drawing pretty women who wear stylish clothes. If you thumb through some of his art books like ‘Step’ or ‘Illustration H’, you’ll see he draws maybe one guy for every 100 girls, and honestly who can blame him?

He’s built quite a career for himself drawing eye-candy earning himself a huge and varied list of clientele that includes cult phenomenon anti idol Seiko Oomori, Dennys Japan, and the entire neighborhood of Kichijoji, known for being quite the trendy area.

You’ll see Eguchi art on bottles of Wine, in department store storefronts, and even graphics cards. Not to mention, his art spread like wildfire through certain internet subcultural channels giving the artist an even wider net of fans. His style is at a glance recognizably him, blending an original manga influence with nods to high fashion and impressionism.

Stop!! Hibari-Kun! is a light-hearted comedy manga from the 80s whose trendy visual prowess alone gave Higashi Eguchi some viability as a career illustrator. Believe it or not, Stop!! Hibari-Kun! ran in the hallowed pages of Weekly Shonen Jump during its golden era right alongside other all-time heavy hitters like Akira Toriyama’s Dr. Slump and the eternal Fist Of The North Star.

It only ran for two years and topped out with four volumes but was popular enough to earn itself a 35 episode anime adaptation.

The story itself could come across as either played out or relatively progressive for its time depending on how deeply you want to look into it. It stars a boy named Kousaku who moved into the Oozora family home after his mother’s death, where another ‘boy’ his age named Hibari lives. What makes them so special is, why, Hibari is as pretty as a girl and always dresses accordingly too.

On one hand, the set up is largely used for gags and some of the humor amounts to ‘Hibari-Kun’ being labeled a cross-dresser without any serious introspection that a reader today might demand in its situation.

On the other hand, Hibari has stated it was a mistake that they were born with a boy’s body. Being a light-hearted comedy tale throughout, Eguchi doesn’t ever get too deeply into the issue.

An Aesthetic Icon on The Internet and IRL

Some days, it feels actually hard to avoid Hisashi Eguchi art sometimes with how much of a prominent commercial artist they’ve become. Often doing tie-ins and tie-ups with gigantic franchises, fashion lines, and popular tourist destinations in Japan, odds are about 50-50 that you’ll bump into some Hisashi Eguchi illustration when walking around more populated areas of Japan.

Whether on a flyer to promote something in town or on an album cover in a recording star, Eguchi’s art has wormed its way into many pockets.

However,  Hisashi Eguchi illustration overload isn’t something you can only experience in person, as his art has proliferated online to whole new audiences that wouldn’t have heard of him otherwise. For every IRL album cover, Eguchi has illustrated, 100 anonymous Vaporwave artists on Bandcamp or YouTube have illegally used his imagery to promote their work.

Putting legal status aside for a second, his fashionable and playful depictions of women have lent themself perfectly to the capital A aesthetic trend that’s been prominent online for the last ten years.

A Nod To Hisashi Eguchi The Character Designer

While Eguchi primarily is known as an illustrator first with a past life as a manga artist, he’s also done some character design work for some of the most important anime films of all time. The biggest of these would be, of course, Satoshi Kon’s idol centric Perfect Blue which is in keeping with Hisashi Eguchi’s desire to draw pretty women.

He had worked with Kon previously on the long out of print and unfortunately under-remembered  Roujin Z too.

100 Years of Seifuku Exhibition Opens in Tokyo in April