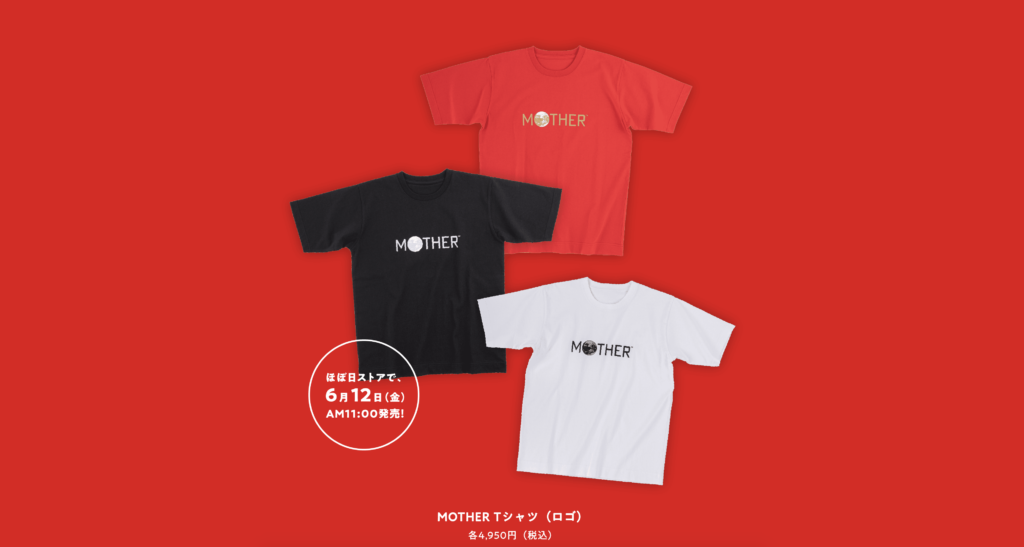 Last week I wrote about the announcement of the Pollyanna Comic being announced for a release on June 12th via the official Hobonichi shop. This was the first real announcement in relation to the HOBONICHI MOTHER PROJECT that was teased not long before, and keeping up with the pace of updates so far yet another inclusion has now been announced.

Going up for order on May 12th alongside the Pollyanna book & Mr. Saturn Cotton Bag, a new trio of official MOTHER T-Shirts is also dropping. Inspired by a design released back in 2006 alongside MOTHER 3, this shirt design features the MOTHER logo emblazoned across the front in a decently large size. It’s being made in 3 colors, and is going to set buyers back 4,950¥.

I’m a little bit mixed about my thoughts for this particular release. The red shirt with the gold MOTHER logo is about as perfect as it gets, and I’m absolutely putting my order in for it alongside the book & bag, but I really can’t help but feel like they could have done more with the rest. Simplicity is good sometimes, but as someone who still owns all 3 of the absolutely amazing oKing of Games MOTHER shirts that dropped in 2006 (the SMAAAASH! shirt is still one of my absolute favorites), I would have loved to see them play with the franchise more. MOTHER has a plethora of silly characters and fantastical art that could have been pulled for this.

Regardless, I’m beyond pleased with the frequency of the updates so far and I really hope this is just the beginning. We still have 6 months left in the year so there’s a lot of potential for surprises to come about, and I’ll take any support for the MOTHER franchise that happens in an official capacity that comes along.