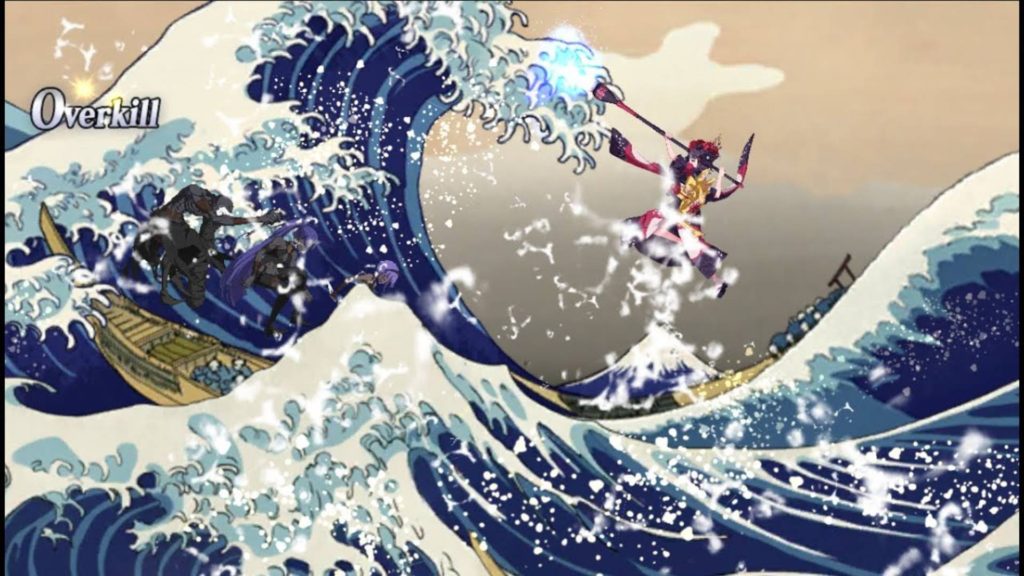 Without a doubt, my absolute favorite thing to spring out of the advent of worlds like Fate and Kantai Collection is that you can Google any given historical figure or vessel, and there’s a very high chance that your search results will be littered with dozens of cute anime girl versions of your query.

In the case of Fate/Grand Order’s take on legendary Japanese printmaker Hokusai, we’re not quite at that level yet. However, the game’s cute girl take on the painter does include some nifty shoutouts, such as the weapon she wields being a giant paintbrush, and her alternate outfit being very fishy — in reference to Hokusai’s “The Fisherman’s Wife,” perhaps the first piece of eroticism of a human being involved with an octopus ever conceived. Of course, perhaps the best-known Hokusai ukuiyo-e style woodblock painting is “The Great Wave off Kanagawa,” which is given a tasteful shoutout with the Fate character’s Noble Phantasm, as seen in this article’s header image.

All this newness surrounding the painter is finally coming to a head next month in Odaiba in Tokyo, where NAKED, an artistic technology company, plan to put on a unique water projection mapping display show for one night only atop the waters of Tokyo Bay. Fate/Grand Order‘s own Hokusai will gracefully paint the waves of Tokyo Bay with the actual master’s own works.

Hokusai will be joined by characters Shuten Douji, Kiyohime, Musashi Miyamoto, and even Mash. A brand-new piece of collaboration artwork was released with the announcement. Visitors are especially urged to board one of the event’s special yakatabune, a traditional Japanese rowboat. Tickets are available through Lawson Ticket, for cruises leaving at 4:15, 5:00 and 5:45 pm on March 17. The tickets will set you back 16,000 yen (around $150 USD) a seat.

As a one-day and likely one-time opportunity, I can’t really think of any better way for both history buffs and Fate/Grand Order superfans to spend an evening in Odaiba. Be sure to check out their official website here.