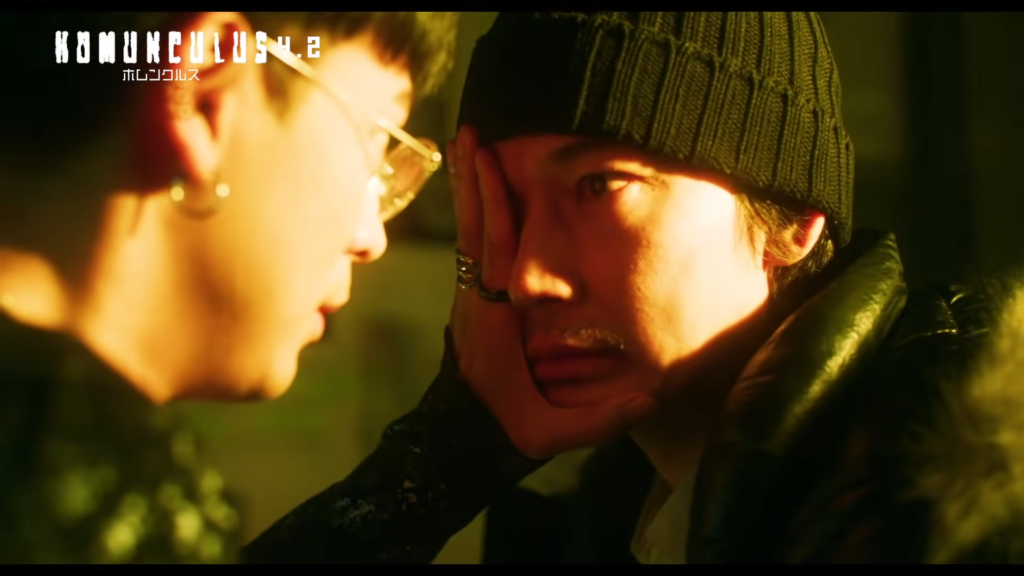 Homunculus should have been a cult-classic Japanese movie impossible to track down, but one people whispered increasingly wild and abstract rumors about. Ideally, the Homunculus film would have arrived in your mailbox in an unmarked manilla envelope on a DVD that appeared to be scratched to bits but would miraculously play in your Playstation 2 if you hit it at the right angle. If Hideo Yamamoto had made the original Homunculus manga before his cult-classic Ichi the Killer, the only way you could have watched it was to pirate it from P2P software that would’ve unloaded the most hellish of viruses on your computer and you’d be thankful for the trade-off.

Instead, we got a Homunculus movie made in conjunction with Netflix, 10 years after the manga finished, and 18 years after it began. It being funded by Netflix means the film had at least a decent budget to work with (not a given for Japanese cinema), but at the cost of unnecessary gloss and unfortunate restraint.

On some level, the fact that a Homunculus film exists at all still feels unreal. Yamamoto’s original comic ran in Shogakukan’s Big Comic Spirits from 2003 through 2011, alongside Goodnight Pun Pun and I Am a Hero. Amongst a company like that, you shouldn’t be too surprised to hear it’s a venerated seinen all-star, but one without too much readership in English-speaking countries (never having been properly released in one), though some European countries can say otherwise.

The film follows the manga’s set-up to a T, at least for a while; Susumu Nakoshi, a mid-30s man seen to be living out of his car, somehow gets talked into letting Manabu Ito, a medical student with strange aspirations and stranger fashions, perform trepanation on him. Trepanation, by the way, is when you get a hole drilled into your skull to ‘alleviate brain pressure’ in hopes you’ll of opening up one’s spiritual third eye.

And boy, does he! Ito then has Nakoshi start documenting his experiences with psychic phenomena, as the latter becomes something of a roving soothe-sayer.

Most of what the Homunculus film doesn’t just get right but particularly excels at centers around performances of the trepanator and trepanatee. Gou Ayano leads the movie with a gripping performance of the down-on-his-luck and frustrated Susumu Nakoshi, pictured on the right. As Nakoshi slips further into altered states of consciousness and sanity, becoming increasingly accustomed to them, Ayano more perfectly wears Nakoshi’s skin.

The dearth of his acting ability comes to full bloom with Ayano dancing through a number of outlandish set-ups, such as Nakoshi bringing a hardened Yakuza to tears by drawing out his childhood trauma or eventually putting a drill to his own skull and pressing the trigger, all with real conviction.

The recently busy Ryou Narita proves why he’s been starring in a number of different films as of late, capturing all the subtle manias of a med-student who would, in fact, drill a hole into a homeless man’s head in his make-shift apartment operating table.

However, once you get past the performances, the movie begins to feel a little flimsy. With a premise like ‘man with a hole in his head begins hallucinating and is able to use those hallucinates to spiritually heal people’, you’d expect loads of eerie ambiance and psychological tension. Following the manga’s plottage for three quarters or so, you do get some of that, but, comparatively, the weight just isn’t there. Nakoshi hops from person A to person B with little coherence in between, and while you’ll feel the performances, you won’t be fully transported to his illusory world.

Perhaps part of that combs from the fairly competent CG the hallucinations are carried out with: not low-poly enough to have aesthetic charm, and not high-budget enough to not look like CG. It’s a bit hard to take the hallucinogenic imagery seriously.

Conversely, it worked so well in the manga precisely because they were depicted in the same inks and toners the real-world was, allowing Nakoshi’s trepanation-fugue state to home-in on the audience.

Deviations from the manga wouldn’t be a problem if those changes added in any meaningful way. Instead, they only subtract from what the ideal Homunculus film could have been. The whole-last chunk of the movie thoroughly truncates the climax and the ending, changing details and cutting important scenes, like the manga’s actual finale that reveals an important facet of Narita’s character.

For once, fans wouldn’t be wrong to be up in arms about it, as calling that cut ‘problematic’ would be an understatement. Again, if these differences meant a better movie, I’d be all for them. After all, Takashi Miike’s Ichi the Killer takes plenty of liberties from Hideo Yamamoto’s original comic and that’s one of the most beloved Japanese films of all time, while being gnarly as all hell. His Homunculus deserved a film of the same caliber, of equal psychological gnarliness, but even its most brutal moments lack the context, style, and weight to make anything but the actor’s takes on their characters connect.

Homunculus is now available on Netflix.