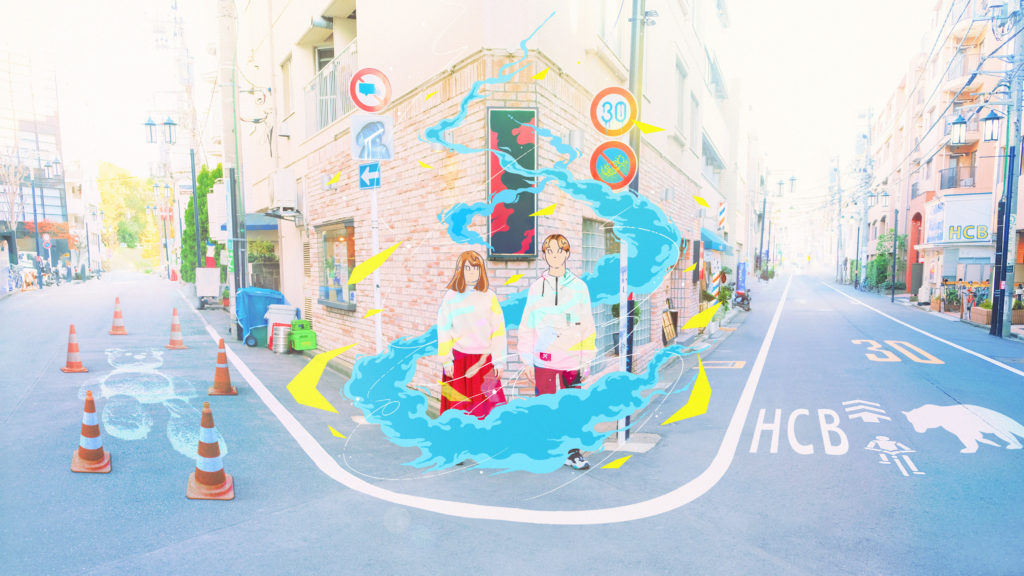 HoneyComeBear Interview: Making Music In Their Own Way

HoneyComeBear is the Japanese musical duo or Monkey & Kaako, and a group that we have been championing for a very long time here on OTAQUEST. Late last year they performed at the first-ever OTAQUEST PLUGGED IN event at Akihabara’s famous club MOGRA, and we caught up with them again not too long after to learn more about their background, process, and plans for the future!

OTAQUEST: Can you tell us about when you started music?

Monkey: None of my family members played music, but my mother’s friend used to play drums in a band. So, I started playing drums when I was in elementary school and joined a band when I was in junior high school. When we started writing original songs for that band, I didn’t think that anyone would write songs for us, so I bought a guitar and started to write songs by myself.

OTAQUEST: What types of music were you listening to at that time?

Monkey: I listened to music from different genres, but I used to listen to Siam Shade so much when I was in elementary school. They’re a hard rock band so, I played only hardcore when I was in high school.

OTAQUEST: Kaako, did you play music since you were a child?

Kaako: Yes. I loved singing songs since I was a child. I participated in chorus from elementary school through to high school. When I was in high school, I formed a pop music band where I played the guitar and did vocals. But, as Monkey did, I wrote most of the songs and music, and it was more like a one-man-band. I was in the band and playing but had a rough time thinking that “I was just making the other band members play songs I was satisfied with.”

OTAQUEST: I heard the two of you met at a technical school, who’s idea was it to make the group? Is that you, Monkey?

Monkey: Yes, I asked her first. I wanted to make music simply focusing on songs, and I heard her songs, I told her “I want to do music with you.” So, I started arranging her songs, when we were in the second year of the technical school, I decided to pursue artistic activities. By that time, she was already active as an artist, so I joined her work.

Kaako: Was that so? As far as I recall, we started to create music together somehow, and it continued even after we graduated from technical school. As for a genre, we first made pop music, but we thought it is different and started to make dance music… I just don’t remember how we started this unit, we just let things take their course (laughs).

OTAQUEST: Was the musicality and direction of HoneyComeBear clearly decided from the beginning?

Monkey: For the first year or two, it was our feeling out period to find the music we wanted to do, and decide to some extent what we wanted to make. We started thinking about our activity plans only after we reached the level where people could listen to our music. That’s why we spent six months before releasing our first song “Sneakers” after the completion of the song. At first, we were like, “we are going to release one song every month,” but we couldn’t make as good of music as we envisioned, so now we feel that we want to release only good music even if it might result in making our fans to wait. However, since we are not sharing anything about our private lives, it is difficult to report our survival to our fans that “we are alive.” When I’m going to update, I have to release a song (laughs).

OTAQUEST: By the way, is this time span to release songs ideal?

Monkey: I am afraid it is not. It is the most ideal way if what I imagined in my head automatically gets mixed, mastered, and released. (laughs) It takes a lot of time to work in post-production, so I want to release the ideas that keep pressing this hard disk in my head as soon as possible.

OTAQUEST: Can you tell us about your production environment and process?

Monkey: We always make and share ideas on our computers. Something like “I made a really cool kick.” (laughs) From there, when we agree like “oh, this is good,” then it’s my turn to spread out the ideas into four or eight measures.

OTAQUEST: How do you come up with the ideas?

Kaako: I work like “I’ll try to make a rhythm loop like this” or “I’ll add something like this” using a sample sound source, and there are many cases where I come up with eight measures of ideas.

Monkey: I’ve been living in this lifestyle for a long time like listening to music and making songs all day, so I can’t tell exactly when and where I get the ideas (laughs). Rather than switching consciousness and making music, I guess I am always thinking about trying to make it.

OTAQUEST: Do you write lyrics, together?

Monkey: I know I don’t have the mindset for that, so I let Kaako write the lyrics from the beginning.

Kaako: It’s a plus for the group to be able to compensate for the bad parts. On the other hand, I leave the mixing and mastering to the good-eared Monkey (laughs).

OTAQUEST: I see, how do you write and work on the lyrics?

Kaako: It’s like putting one concept inside you and expanding it more and more. People are always alone, so I always keep in mind that I want to write lyrics which people listen to alone and think “this is good”. As for the production process, we always make the melody first, but I think that there is no need to stick to that style, so I barely feel that “I have to write lyrics to improve the melody.”

Monkey: This is only because she is good at understanding my worldview. On the other hand, we sometimes change the music to match the lyrics she writes. Like if we have a word like “bottle” in the lyrics, I add the sound of a bottle. For the music I make, the main character is the song, so it often happens that I change and make a song that matches the lyrics.

OTAQUEST: Looking back at your work, how do you see the music you created?

Monkey: The first thing we think about is, “what we want to do now”, then we think about how we’re going to release it, but there are some songs where we think like “how did we make them?” For example, our second song “Natsuzora,” when I first got the melody from her, I threw it away once telling her “I can’t arrange it” because it was way too different from what I had done so far. I couldn’t think of any way to make use of that melody. So, I remember only making it after worrying for about a week, but if you listen to it now, I think it’s a genius song.

OTAQUEST: I think that your style of only keeping what you carefully select that suits you is wonderful. “This kind of sound is in fashion, so let’s get into it” There are many different ways of being an artist now, but what kind of plans do you have for the future?

Kaako: Personally speaking, I want to do whatever we want to do until we belong to a label. There are a bunch of things we want to do and try, but we are still in the stage where we are trying to grow and make them bigger, so we are always thinking that we want to make them come together as soon as possible. Right now, I can’t afford to worry about the people around us, so it doesn’t matter what the fashion is.

Monkey: I kind of have a similar idea, but above all, I want to make something good. If I really feel like the genre is trendy, and if I had been a solo artist, I would definitely have been getting into trends. The way I do it now is the result of thinking about “how can I make music that fits Kaako’s voice?”, so I think I’ll probably try it out more if I find a music genre that makes more use of Kaako’s songs, but so far, I’m satisfied. However, our goal is to deliver music to a wide range of people in the majors. The artist activity we are doing now is at the stage where we hope to raise ourselves to a point where people in the industry can find HoneyComeBear. I haven’t reached that point yet, so I’ll do my best (laughs).

OTAQUEST: You’ve appeared at many different events, can you tell us what it’s like to perform at events for you?

Monkey: It’s fun, and we usually don’t do too many shows so it’s a place to realize that I’m a person who commands the stage.

Kaako: Same here. If we don’t have any events, I would just stay home (laughs).

Monkey: And when we’re working on the Internet, we can’t even tell if the audience is human or not. Moreover, Japanese people tend to say what they don’t like, but there is not much custom to say what they think is good. So, when I appear at an event, I can feel the presence of the people it’s not resonating with, and sometimes people will message us through social media to talk to me, which makes me think the messages on social media have more meaning for the first time.

Kaako: When I actually see our fans enjoy our music, I can recognize that “the audience is here because they like HoneyComeBear’s music.”

OTAQUEST: For the last question, can you tell us about your dreams? What kind of story do you want to create in the 10 years or 15 years?

Monkey: I want everyone in Japan to know HoneyComeBear’s music, and the ultimate goal is to be like Michael Jackson who could not go out because everyone knew where he lived. That’s the goal (laughs).

Monkey: If that happens, then we’ll aim for foreign countries.