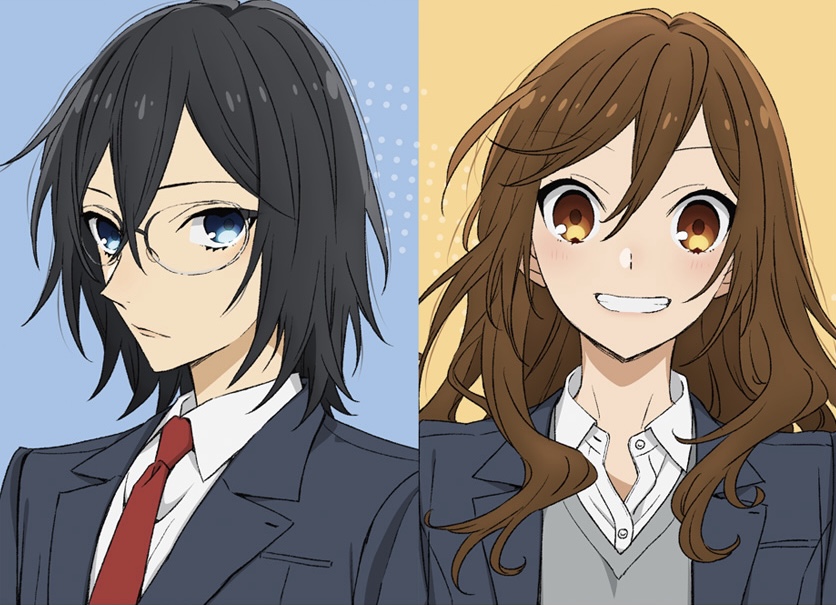 Horimiya Is Great, but Not for Its Romance

Three episodes in, and it’s fair to say that Horimiya is a successful adaptation of the long-running manga series. The show is one of the most popular non-sequel anime of the season, and as Carley noted in her review, it delivers on its promise of a full adaptation after years left untouched aside from the occasional OVA. While most Horimiya fans are watching the show for the sparks-flying romance between its two protagonists, Miyamura and Hori, that’s not necessarily the main appeal of the show.

To offer the contrarian opinion for a second, I don’t think the romantic elements of the show are all that engaging. That’s not to say I’m not enjoying it for much the same reasons as Carley noted, but it ultimately feels a little by-the-numbers and generic. 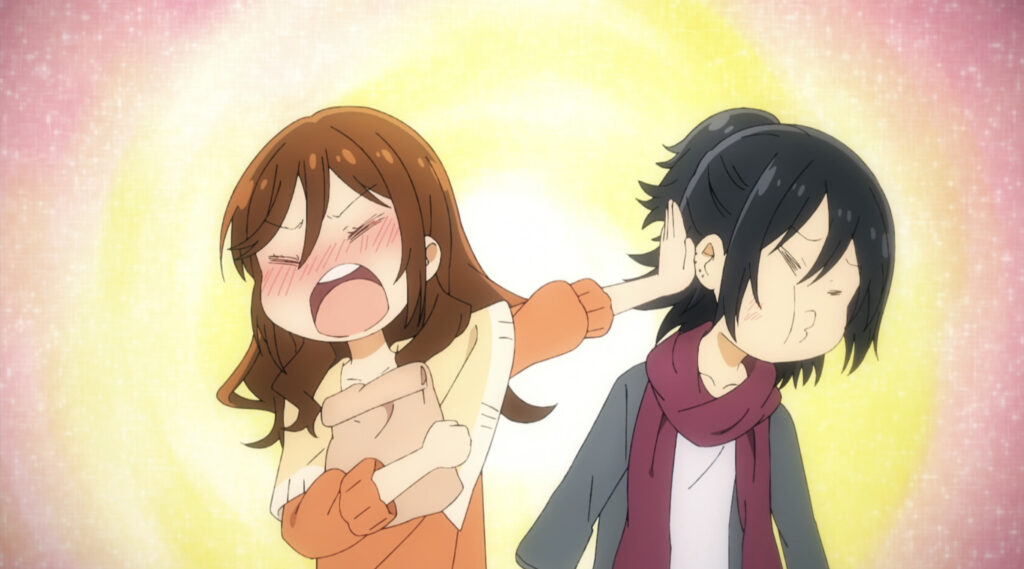 Or at least, it would be, were it not for the strengths of our main duo. While I only hold a passing interest in their blossoming romance, I find myself far more drawn to the story’s external focus on the creation of persona. We’ve had romance anime and manga in the past build incredible romance stories on a person’s dual personas, including greats of the genre like His and Her Circumstances. In contrast, Horimiya is far more interested in the crafting of that persona and the purpose of creating a persona solely for self-acceptance, giving it a unique edge.

The first episode of the show mostly serves as an introduction to our two protagonists and their out-of-school personas. We see in this episode how the top-of-the-class social bird Hori passes up an after-school social life to care for her younger brother due to her mother’s busy work-life. Meanwhile, and perhaps more interestingly, Miyamura is an outcast in school and mostly keeps to themselves, but out of school. They express themselves with secret tattoos and piercings, making him somewhat of the rebellious bad-boy with a heart of gold.

While the show could easily leave it at that, Horimiya instead dives deeper and pushes the romance to the side for much of these early episodes to explore these personas. This show is invested in exploring not just why these characters are self-conscious enough to hide who they are, but the benefits of self-understanding outside of the public eye. 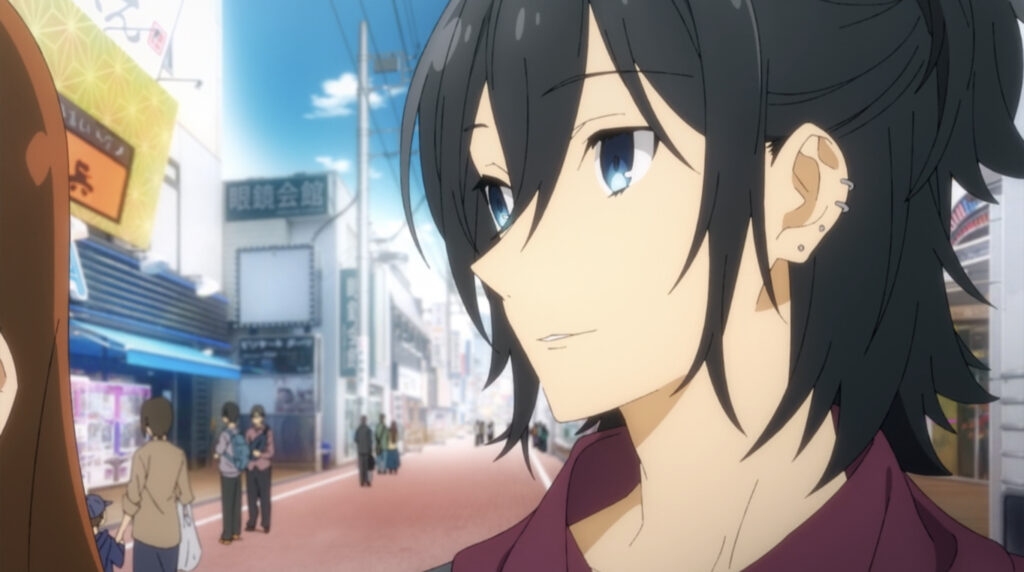 Social media is non-existent within the world of Horimiya (and since the original 4-Koma web-manga that inspired the long-form manga this is adapted from was created in 2007, that makes sense), but that’s not to say that the influence of the story being created in the internet age isn’t present. Modern life and the internet puts pressure on all of us to overshare all aspects of our lives and present an idealized reality of our daily lives. Choosing not to is suspicious and will lead to ostracism.

Both Hori and Miyamura hide key aspects of who they are as a way of grounding themselves. Our public image is never ours to control; while we can choose what we share with others, at the end of the day it’s the people around us who determine our social standing and strengths. For Hori, they hide their family commitments not out of fear but because they want this side of them to remain only for her mother. The people she cares for most are the only people allowed to see the true Hori, which makes the opening to Miyamura significant.

For Miyamura, as explored heavily in episode 3, his childhood was one where acting himself led to him being called gloomy and creepy. It was only by finding a new sense of self and keeping it to themselves that they found inner strength. 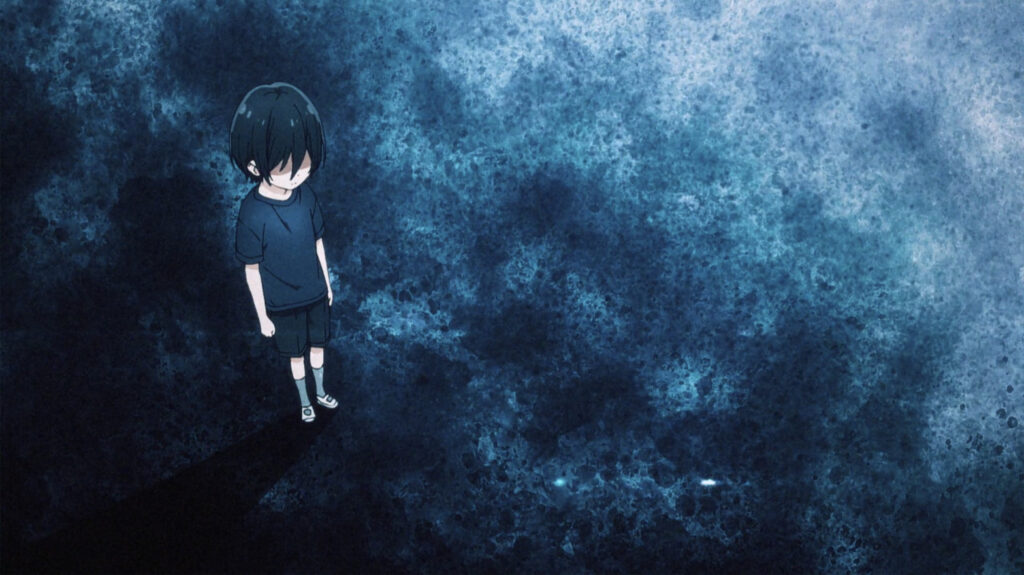 In particular, his ostracisation from others was what spiraled him towards self-hatred and regret until he decided to take back control and create this hidden self of tattoos and ear piercings. There’s a deeper discussion on the nature of bullying and self-harm (in the form of creating the excessive piercings, especially when the first was self-done with a safety pin) that Horimiya chooses to ignore, but it doesn’t dilute the core idea that Remi chooses to take control of his pain to find an identity entirely his own.

The anime makes clear that their hidden personalities are a defining part of who they are and allow them to wield complete control over themselves in a way that gives them the confidence to open up and trust one another when they mutually see the other’s hidden self. Inner assurances on the self allow them the control to share this with only them. 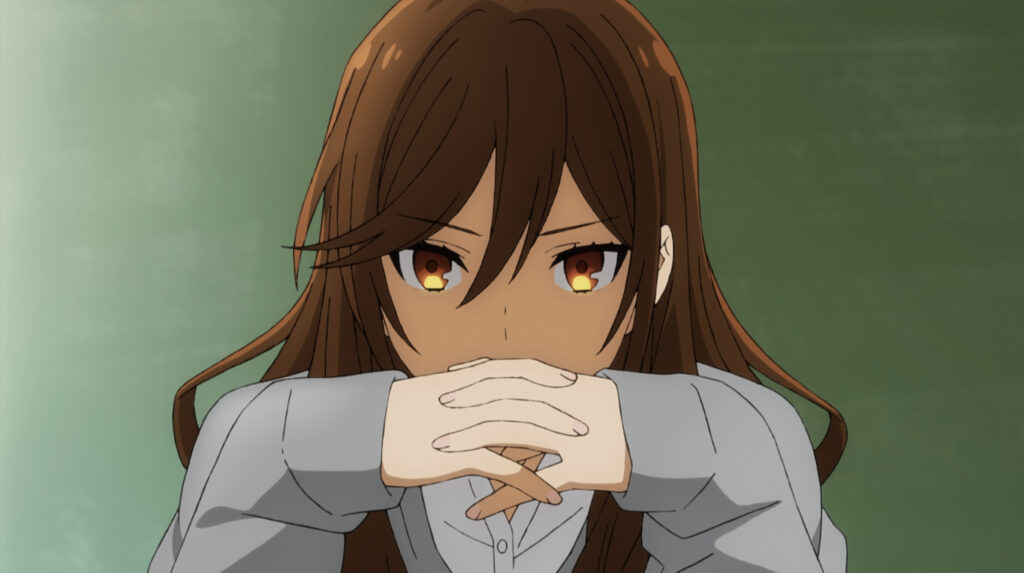 If romance anime that bring strangers together through hidden personalities is a common trope, few have the drive and desire to celebrate what these hidden selves can potentially bring. While the romance of Horimiya may be mostly by-the-numbers until this point, it’s refreshing to see a romance show tackle its subject matter in such a way and encourage a private self-discovery away from the external eye of others.

I fear that Horimiya’s exploration of these tropes in the opening three episodes will fade away as the romance becomes a more central focus, but I’m nevertheless excited to see more.

Horimiya is now streaming on Hulu and Funimation.

Horimiya Manga to End in Next Month’s GFANTASY