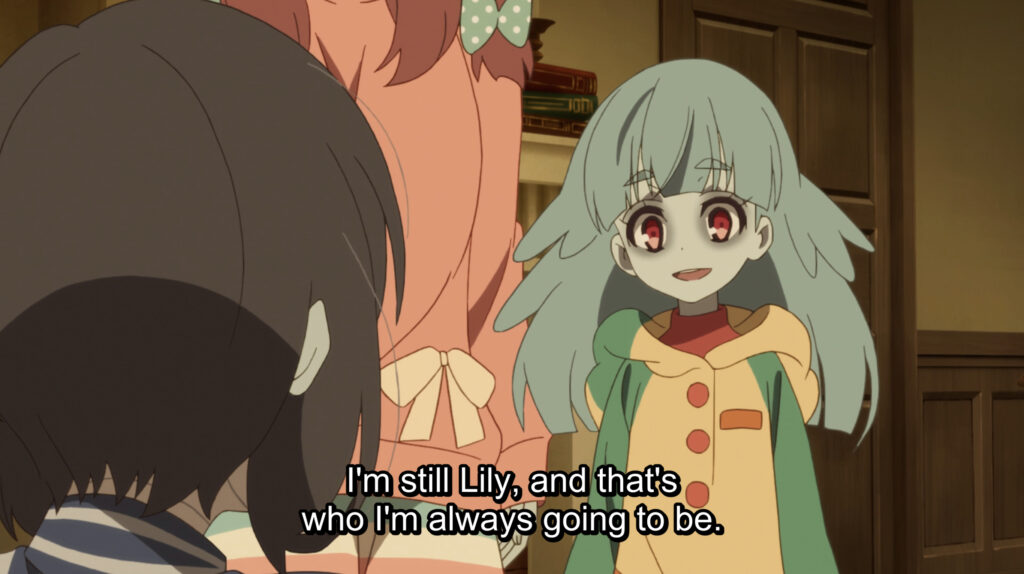 I’m not sure the anime fandom has ever rallied around what a character represents in quite the way many fans rushed to celebrate Hoshikawa Lily’s trans identity upon its exploration in Zombieland Saga episode 8. It’s easy to see why: the show deftly and respectfully handle an episode which revealed that Lily was a trans child actor, when it’s incredibly rare to have positive trans representation front and center in any anime.

The storyline of the episode explores gender dysphoria in an easy-to-understand manner that attempts to represent how an unwanted physical change can be heavily distressing for trans people, sending a person spiraling into feelings of depression… or worse. All of this is handled wonderfully, making it easy for trans people and allies to rally around her as a symbol.

It’s just a shame the promotional material for Zombieland Saga is unable to offer Hoshikawa Lily the same level of respect fans share for her.

Is Hoshikawa Lily Transgender? Yes. However… 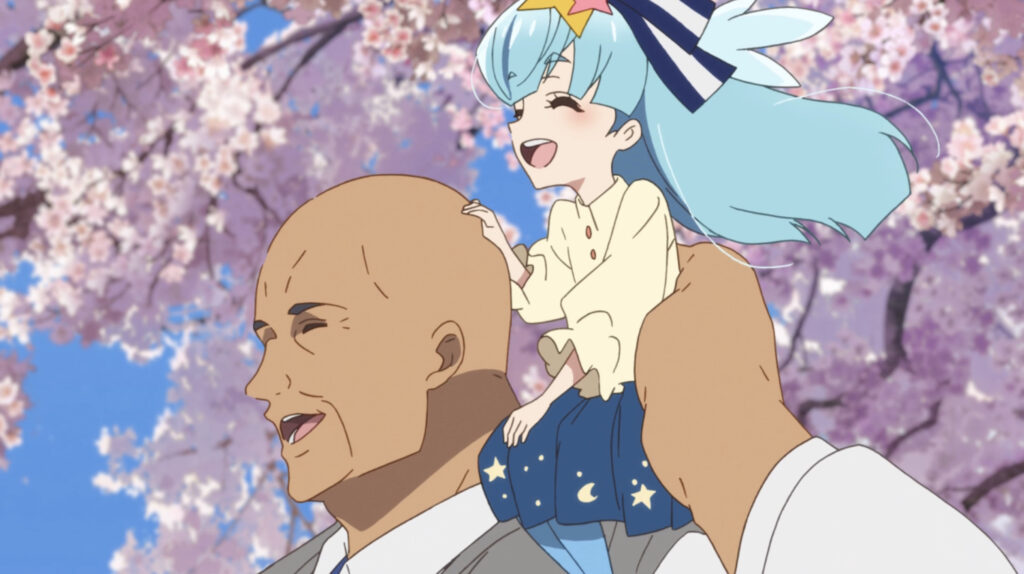 I’ll be honest here, I don’t want to write this article. I think Zombieland Saga is an inventive and enjoyable anime original that blends idol culture and preppy music with engaging characters that make it a joy. I can see how much the staff care for the show in every aspect of its production, while I’d like to think that my introduction to this piece showcases just how much Hoshikawa Lily means to me as a character. Yet there’s a dissonance between her portrayal in the anime and in promotional material that undermines the series’ positive representation.

Fan responses were jubilant when it was revealed that Hoshikawa Lily was trans in episode 8 of Zombieland Saga. The outpouring of fans in response to the episode was almost universally positive. It earned coverage from the streaming service showing the anime, Crunchyroll, and other places like the Daily Dot, while spawning major discussion on trans representation on anime to a level I hadn’t seen before.

I had a bit of free time so I wanted to draw lily hoshikawa, trans icon. #zombielandsaga pic.twitter.com/qWHj6gK20H

The response on Japanese social media was admittedly more muted, but in general, fans were discussing Hoshikawa Lily’s trans identity, and responding to how trans anime fans internationally had reacted to the episode, mostly in a positive manner. It also prompted discussions on TERF rhetoric that has run rampant in UK politics and media following an edit of her character being displayed during a debate in the UK parliament, later being referenced by Japanese Twitter users when discussion of JK Rowling’s comments reached Japanese audiences.

Her trans status has never been something the staff has outright come out publicly to confirm in interviews, but this is undeniably a positive thing, right? Right?

The fact that Lily doesn’t outright say she is transgender, even if her portrayal within the show easily suggests as much, has turned a vocal minority of anime fans into contrarians regarding her trans status. And yet the production committee’s efforts to validate her identity fall woefully short, giving these claims unfortunate weight.

In celebration of the announcement of season 2, Animage ran a cover feature about the anime, featuring an introduction to the series, long interviews, and coverage of the live concert where the news was broken. Such an in-depth feature is typically created with a level of production approval given the content featured in the magazine. In this magazine, Lily is referred to as male. 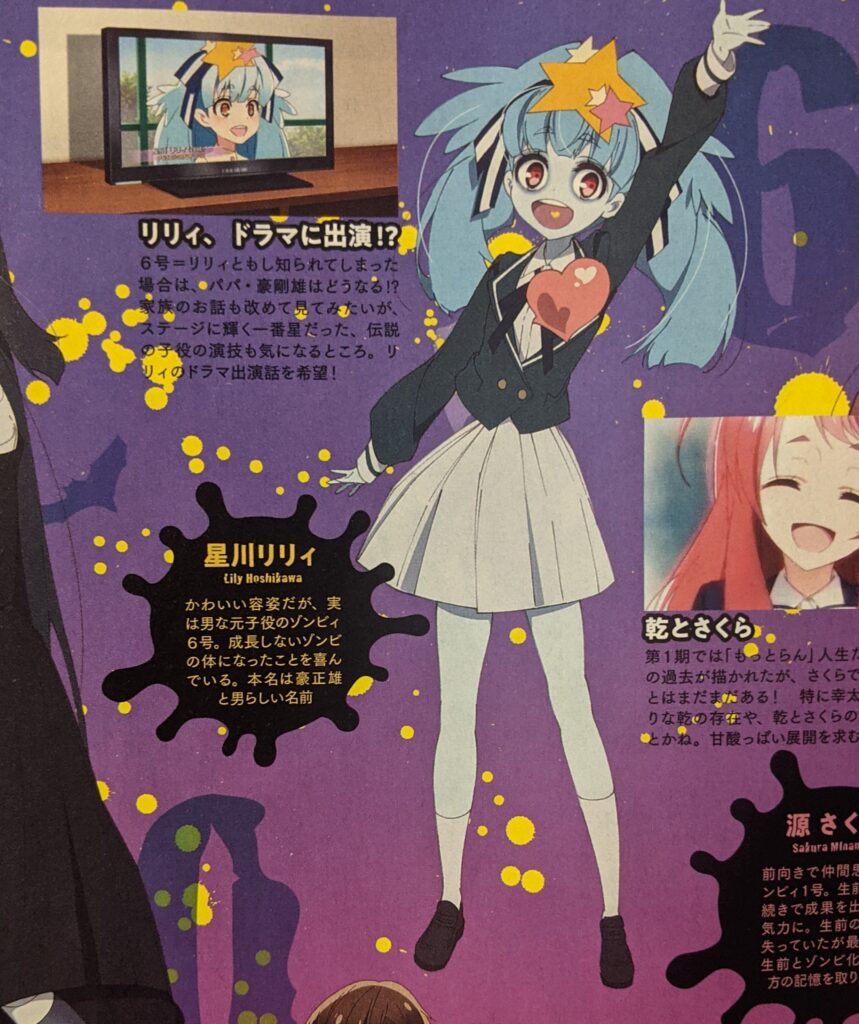 Not only that, they celebrate her dead name (a name no longer used by a trans person due to its relation to a past identity, with the name typically seen as offensive to use to refer to such a person). The magazine makes a point to state that she is ‘actually a boy’, and that her ‘real name’ is a ‘strong, manly name’.

It’s not the only instance of this, either. In an interview relating to the Dempagumi Inc collaboration with Zombieland Saga, they also reference Hoshikawa Lily’s ‘surprising real name’, not allowing her to simply exist as Lily, while other PR representations of the character have similar comments.

Suddenly, her ‘real name’ and ‘surprising identity’ isn’t a part of who she is; it’s a selling point reliant on shock factor.

So which argument stands up stronger? The fan interpretation, supported by outlets covering the series including the official English streaming partner, Crunchyroll? Or the production committee, which makes no reference to the trans identity of the character and even goes as far as to use her dead name as a selling point? I think the argument is a little more complex than simply stating that ‘the team behind the series have decided in promotional materials that she isn’t transgender’.

As mentioned, the actual content of the episode is more than supportive of the possibility that Hoshikawa Lily is trans. From her dysphoria, her death being a result of shock from her changing body, alongside the assertion that ‘Lily is Lily’, these all support the argument that Lily is a trans girl living in an identity she feels most comfortable with. The show doesn’t shift her character to refer to her being a ‘former boy’ in later episodes, either, as Lily chooses to continue her life as a girl by saying goodbye to her father with a song.

From a cynical perspective, you could argue that this is a case of wanting to have your cake and eat it. Transgender issues in Japan suffer most heavily from a lack of visibility and understanding, making it a risk to create media centering on this topic. Even as media success stories like the movie Midnight Swan show public support for seeing more trans stories, they may see it as too much of a risk to discuss the issue.

But such a direction is an injustice to the character. It takes nothing away from the strength of episode 8 of Zombieland Saga, but the production committee actively undermines who Lily is by not addressing comments related to her trans identity and by regularly emphasizing the idea she is ‘fooling’ audiences with a different name and appearance.

Of course, season 2 of the anime is just around the corner, and it could address these concerns by further exploring Lily’s identity in the context of Japan’s growing trans rights movement and the positive international reception.

Or it may not.

As it stands, as much as Hoshikawa Lily can be seen as inspiring by fans, she can’t be a trans icon until the show embraces and celebrates this part of who she is. The publicity surrounding her is a reminder of the hurdles trans people face, not a symbol of trans liberation.

Zombieland Saga is available for streaming on Crunchyroll.