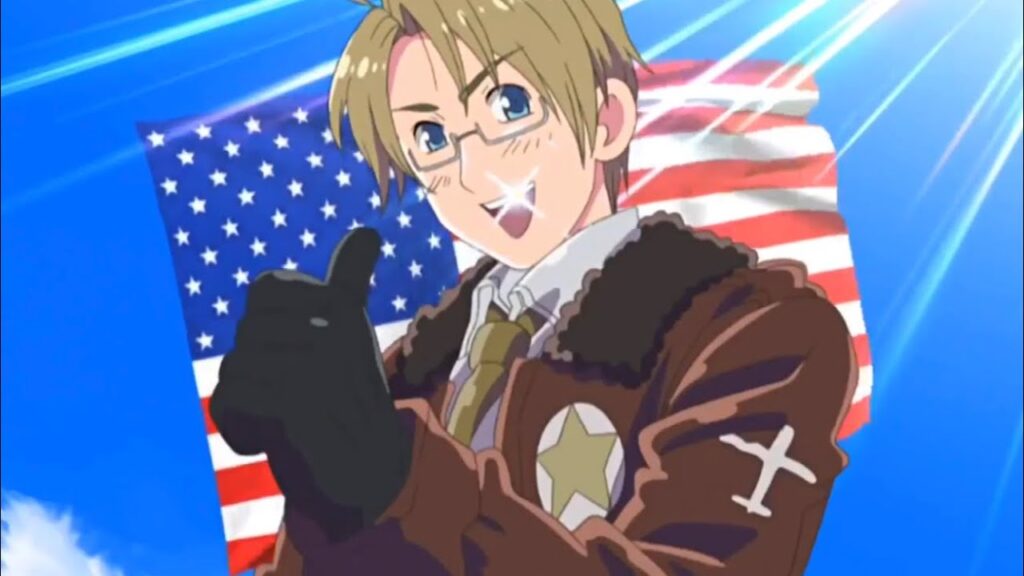 The United States is a huge consumer of anime.

Not surprisingly, quite a few anime series have made reference to Japan’s transpacific ally.

Of course, they don’t always get America quite right. (But then again, how often does Hollywood get Japan right?)

As the following anime examples show, the Japanese have an interesting, funny, and weird view of the United States. And sometimes, they are perhaps a bit too accurate in their descriptions.

Technically speaking, All Might  — real name Toshinori Yagi — is Japanese, not American.

But everything about him — his big, ridiculously muscular body, his perpetual toothy grin, and the hammy, over-the-top way he speaks — screams traditional American superhero.

My Hero Academia is clearly inspired by American-style comic books and superhero stories, so it makes sense from a Doylist point of view that one of the biggest superheroes in the story would be an American superhero parody.

The movie My Hero Academia: Two Heroes gives an in-universe explanation of how he got that way. According to a flashback in the film, All Might spent some time in America in his youth.

Incidentally, the “California, USA” that we see is a great example of anime getting America wrong. “Fabulous Casino King Street” is clearly meant to be the “Welcome to Fabulous Las Vegas” landmark sign.

But the city is a coastal one. It’s also way too dense to be Los Angeles. I suppose theoretically it could be that the existence of superheroes  in the MHA-verse caused changes to world history, including California. Overall, it looks like they applied Japanese modern architecture rules to an American city.  Of course, the story is too awesome for the audience to notice.

At least we get a U.S. geography lesson whenever All Might or Deku does a “Detroit Smash,” “Delaware Smash,” “Nebraska Smash,” etc.

So naturally, it would make fun of American stereotypes with its depiction of the personification of America. Hetalia’s America is a bit childish, obnoxious, and too self-assured of his own role as the main, leading “hero” on the world stage. (He also likes to stuff his face with that quintessential American food, hamburgers.) But, just like All Might, he is also hammy, determined, and confident.

Of course, the first part of Hetalia deals primarily with World War II, so the America that we see is 1940s wartime America.

Apparently, America’s glasses are supposed to represent Texas. That’s weird when you consider that Texas was once (briefly) its own nation, and certainly has its own “culture.” Why would Texas be an object, rather than a person?

Hetalia creator Hidekaz Himaruya studied in the United States for a while, and so the comic reflects the international cultural lessons that he learned.

Interestingly, the episode is a commentary on the growing popularity of anime in America. It first aired in 2000, when anime was still relatively new to the U.S. The episode features American-style mafia, street gangs, immigrants, and poverty, but it’s all filtered through the lens of bringing anime to America.

Hilariously, anime is treated like some sort of drug — the old joke that “crack is cheaper” would apply here.  There’s a black market anime ring, and of course Excel has to fight the mafia.

This giant robot story from 1984 begins in New York City. It features a surprisingly realistic-looking version of the city. It’s like they took a live-action film set in the city and cribbed off of that.

Although Giant Gorg is an action-adventure story rather than a comedy or parody, the first episode just absolutely skewers all of the typical stereotypes of the Big Apple.

There is graffiti everywhere, there are tough-looking guys on the street, our hero runs into a street urchin, and our naïve hero even spray paints graffiti inside a subway train.

One of the main characters looks a lot like Woody Allen, and he lives in a run-down apartment in the city.

As our heroes travel across the country on their way to Polynesia, the action moves from New York City to Las Vegas.  This is the old school, gangster-ruled Las Vegas, before the new family-friendly hotels were built.  We don’t really see much of the city, and the whole purpose of the scene is to introduce a new villain.

Gunsmith Cats takes place in a version of Chicago which really looks and feels like the real thing.

In an interview with Dark Horse, manga writer Kenichi Sonoda notes that he was a fan of The Blues Brothers, which is set in the Windy City.

He states that he “hadn’t actually been to Chicago” at the time, but “the city of Al Capone, prohibition gun battles, and tough cops” seemed like a good choice to him.

Of course, it’s also a good choice because of America’s gun culture.  While Japan may have its share of gun enthusiasts, a lot of what you see in Gunsmith Cats isn’t actually possible in Japan because of gun control.

While we’re on the subject of cops and guns, one of the OVAs for the police comedy anime series You’re Under Arrest takes place in Los Angeles.

You’re Under Arrest: No Mercy! is pretty bad in terms of geography. Hey look, it must be Los Angeles; they have palm trees, the beach, and seagulls.

There’s a location which might be Malibu or maybe Pacific Palisades, if you squint.  The Santa Monica Pier gets a decent cameo, although the beach could just as easily be in Enoshima or Yuigahama. They do accurately depict Parker Center, the LAPD’s headquarters at the time.

But nevermind that. You’re Under Arrest is worth mentioning just for its interpretation of American-style policing — with lots of big guns and intimidation. This was made in 2002 — after Rodney King, but before Michael Brown in Ferguson, Missouri, or George Floyd in Minneapolis.

It comes across as horribly dated in this era of Black Lives Matter.

Japanese people visit Hawaii, but you don’t see a lot of Hawaii in anime.  Perhaps it’s too physically similar to Okinawa, Japan’s own tropical vacation spot. Then there are all of the Polynesian clichés — hula girls, surfing, coconut palms, Hawaiian shirts, etc.

Why did Team Rocket have to disguise themselves as hula girls in an episode which had nothing to do with Hawaii?

For some reason, Kimagure Orange Road: Hawaiian Suspense decided to use King’s Village Shopping Center, directly behind the Hyatt Regency, as one of a handful of recognizable real-world locations.

You would think that they would have used the more iconic International Market Place. But King’s Village actually did look sort of like how it looks in the anime (until it was torn down last year), and they did have royal guards.

For the most part, the episode’s depiction of tourist Hawaii is pretty good. The characters do some perfectly normal tourist activities — they wear swimsuits at the beach, they paddle an outrigger canoe, they ride bikes, and Kyosuke tries (and fails) to windsurf.

They also end up hiking the Diamond Head trail as part of a kidnapping rescue mission.  You know, the typical tourist stuff.