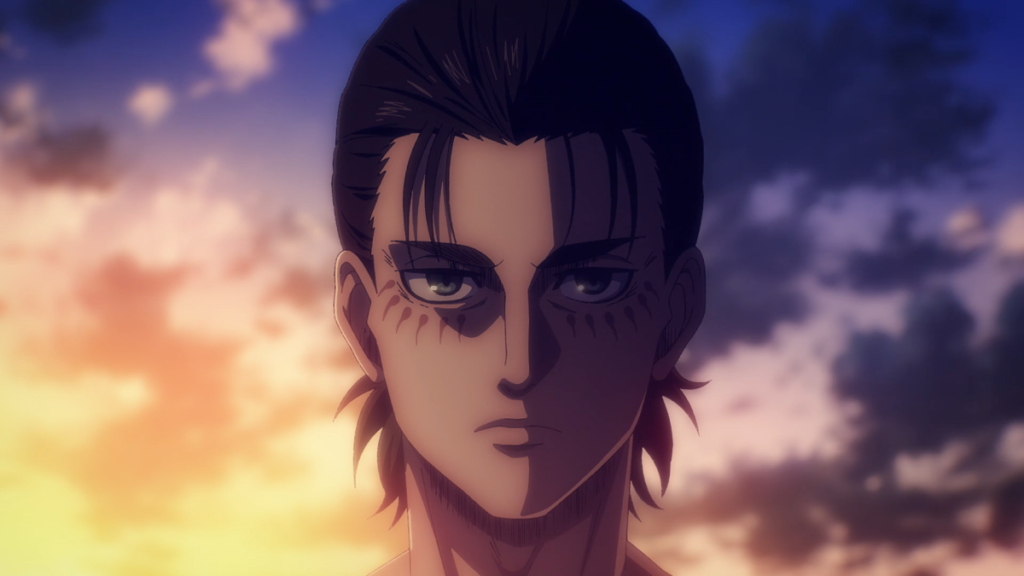 In The Dark Knight, district attorney Harvey Dent has dinner with Bruce Wayne and a few friends, discussing the role The Batman plays in Gotham City. Some see him as a fascist figure, while others like Harvey see him as a protector on the lookout for a successor. He then gives us this memorable quote from the film:

‘You either die a hero or live long enough to see yourself become the villain.’

I feel like this strongly applies to Eren Yeager’s role in Attack on Titan. Throughout the series’ run, we’ve seen him develop and mature from a young child who’s experienced multiple big events that have affected him dramatically. Like Dent, he wants to take the Machiavellian measures to do what’s right, even if it’s at the expense of his own humanity. Ultimately, however, both their actions lead to tragedy and Eren inevitably becomes the villain of his own series. 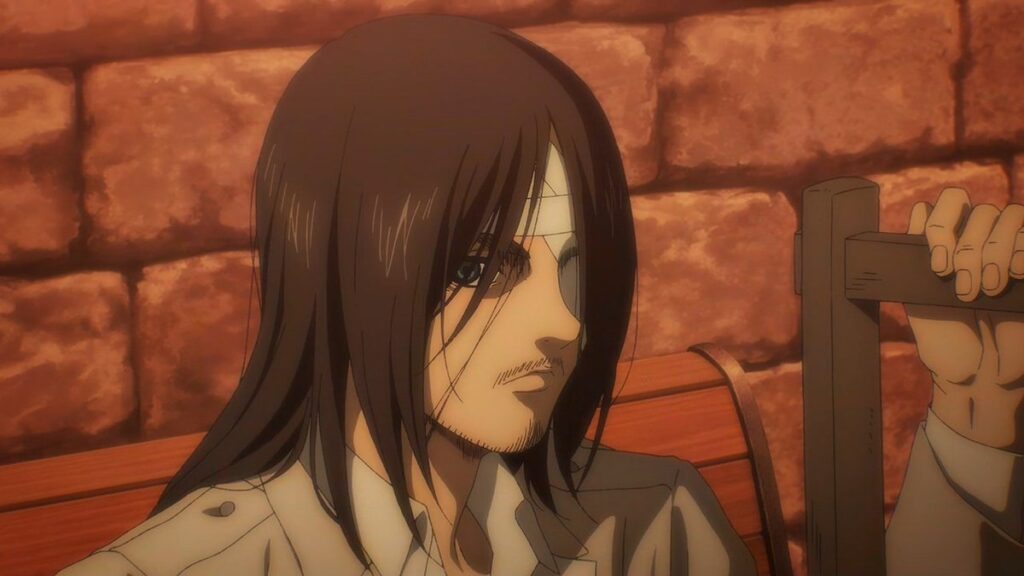 I think it’s as good a time as any to take a season-by-season analysis of where Eren started out and the anti-heroic Eren we now know. For this feature, I’ll focus on what has happened in the anime adaptation. That being said, you’ve been warned for spoilers.

Eren’s path to anti-heroism began during the early part of his childhood in season one. His relationship with his foster sister, Mikasa, is important to his development because of his past actions to save her. Before their family was attacked by Titans, Mikasa was kidnapped by some criminals and was about to be sold off. Eren came to her rescue and took no remorse in killing the criminals in cold blood to save her. 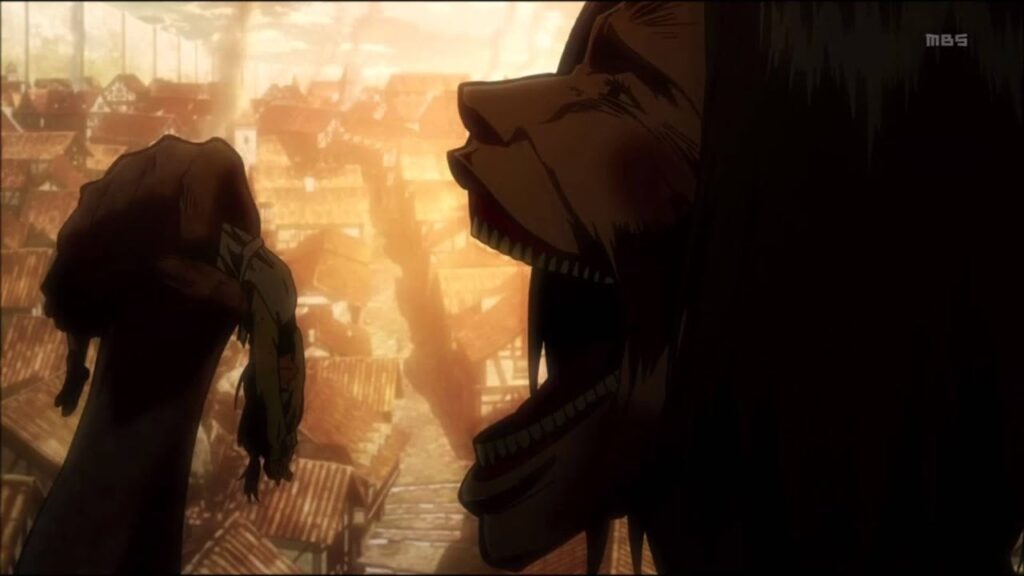 From this point, it’s clear Eren will take any action to protect his loved ones. Before the fall of Wall Maria, he dreamed of joining the Scout Regiment to explore the world beyond the Walls, much to his mother’s chagrin. However, this is tested when the Titans invade Wall Maria thanks in part to an Armored Titan breaking it down and a Colossal Titan destroying everything else. Eren could only watch in horror as his childhood home was destroyed and his mother was eaten by a Titan. This now gives Eren a singular enemy to defeat and spurns his desire for vengeance. 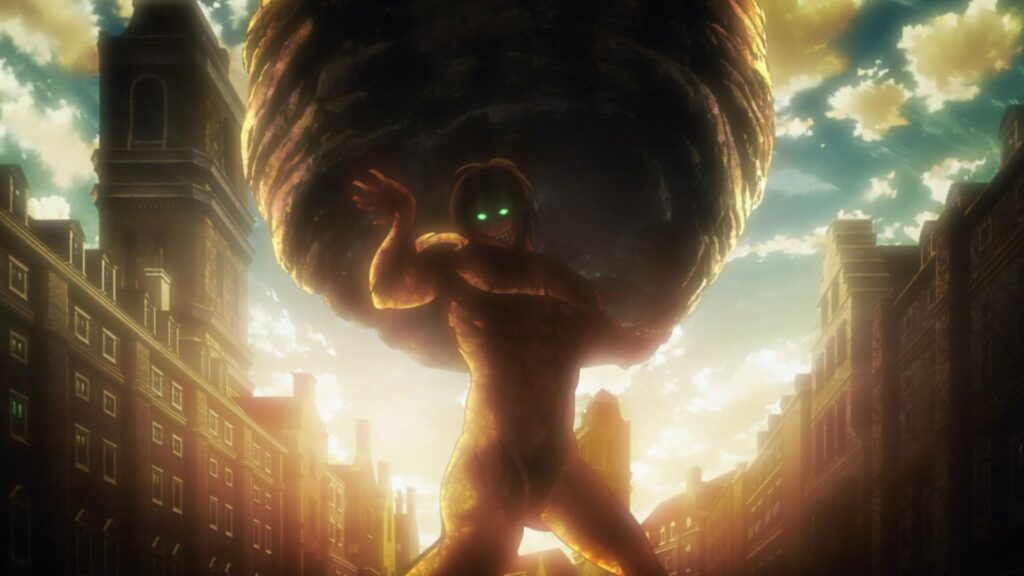 When he discovers he can transform into a Titan himself and fight them off, Eren uses his agency and will to convince the Scout Regiment and others to retaliate. Of course, things get complicated after his fight with Annie Leonhart and the revelation that she was a special Titan herself. In the conclusion of the first season, Eren is more determined to discover the secrets of the Wall and eradicate the Titans. Keep note of this later on as we unpack how he channels his determination in season two. 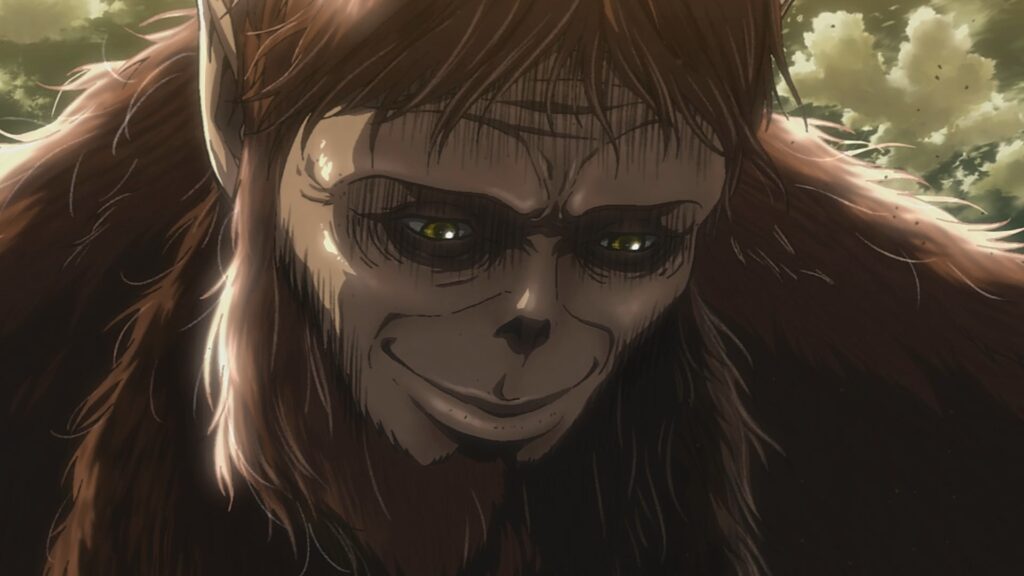 This season marked big changes for Eren, Mikasa, Armin, and friends as they deal with the emergence of a mysterious talking Beast Titan. As Eren realizes that there are other people who could transform into Titans like him, there is a Beast Titan who can speak, and that drastically changes the outlook of a battle and raises more questions about their origins.

While Eren continues to fight for his friends and helps retake Wall Maria, he’s greatly tested when Reiner Braun and Bertholdt are revealed as traitors to the Scout Regiment. Both are soldiers of a nation called Marley who were tasked with secretly infiltrating Paradis Island. Reiner’s power is the Armored Titan that broke through Wall Maria while Bertholdt is the Colossal Titan that did the most damage. Eren’s trust in them shatters completely when they kidnap him to bring to the Beast Titan to be dealt with. 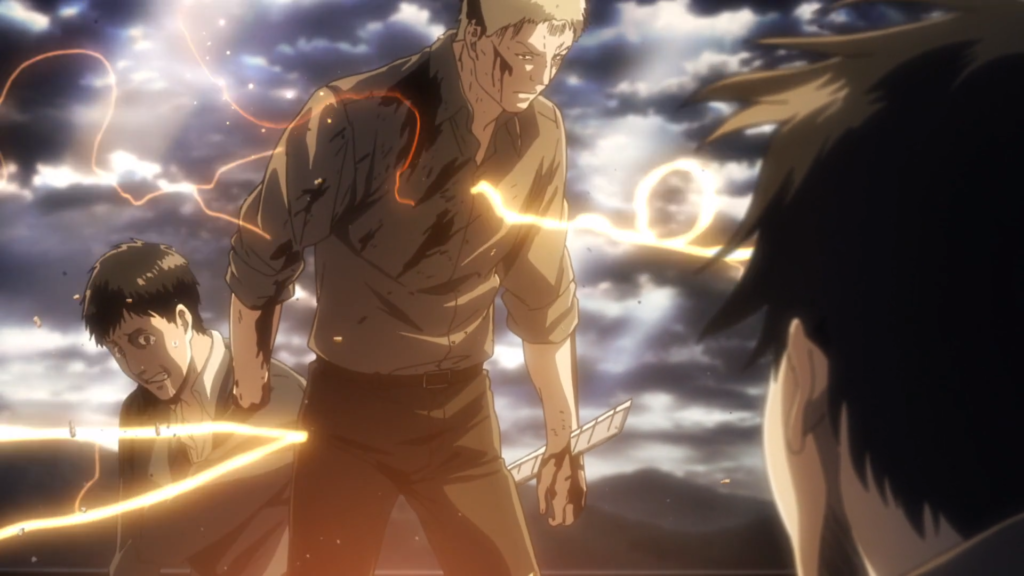 This shocks Mikasa and the rest of the Scout Regiment who thought the two men were comrades. It’s especially heartbreaking for Eren who had a real brotherly bond with Reiner. The situation continues to stress Eren greatly as he’s unable to transform into his Titan as he is distraught by their betrayal. Eventually, Mikasa and the crew rescue him, but allow Reiner and Bertholdt to flee. Many from the group perished in the process, further fueling Eren’s desire to use his powers to help humanity. That being said, he’ll have to resolve himself to face off against his former friends.

Season three sheds more light on Eren’s father, Grisha, and his history with the nation of Paradis. It’s here that we get some valuable insight into Eren’s family history. I believe Eren’s complicated relationship with Grisha is a contributing factor to his radical personality down the road. 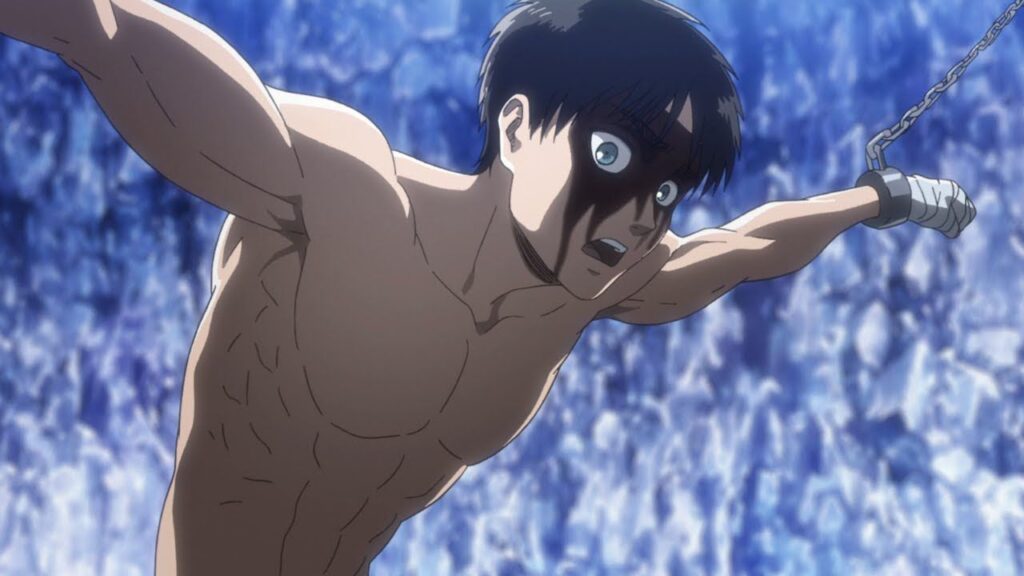 When he was kidnapped, Eren regained memories of what happened to his father after the fall of Wall Maria. Grisha was the one who injected Eren with the Titan serum and had himself devoured to pass the Attack Titan powers on to his son. Because of these memories, Eren grew bitter and angry at his father for not telling him properly and abandoning him and Mikasa. However, he still holds some respect for him because of his selfless act and his firm belief that Eren would be able to save Paradis from the true enemy outside: Marley.

Meanwhile, the mission to take back Wall Maria ends successfully, but at the cost of many deaths, including Erwin Smith. Eren, along with Levi, Mikasa, and the rest of his squad, valiantly fight off the Beast Titan and Reiner in his Armored Titan form. With the help of a revived Armin, they’re able to drive back the Titans and retake the abandoned Wall Maria. Eren’s strength and determination finally pay off as he’s able to revisit his childhood home, unlock the basement, and enjoy the success with his friends. 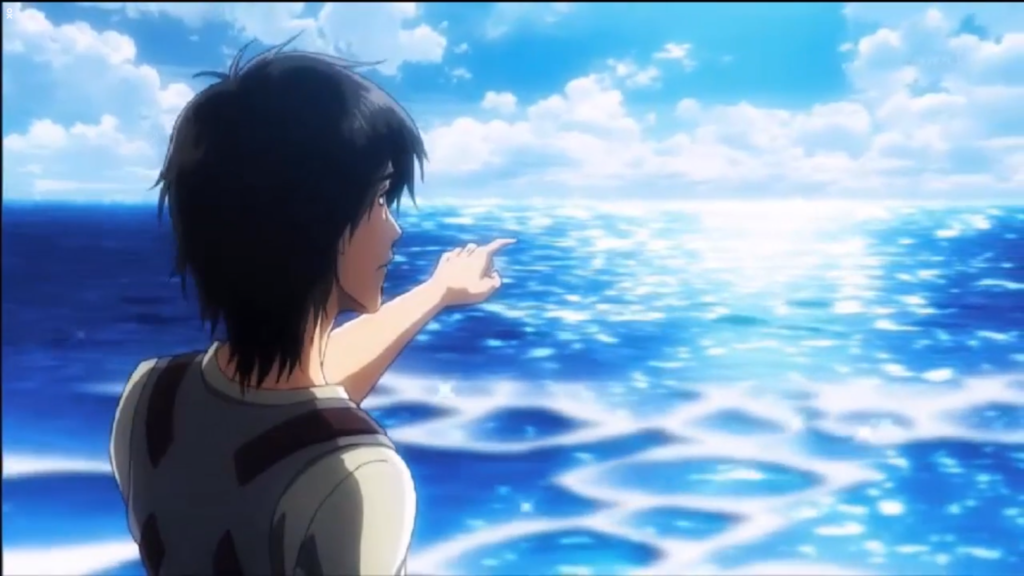 While he does bask in the newfound freedom beyond the walls, Eren starts to undergo a change as he looks at the sea for the first time. With his memories of his father and the realization that there are enemies beyond Paradis Island, he vows to defeat them once and for all.

Eren Yeager vs the World — Attack on Titan Season 4 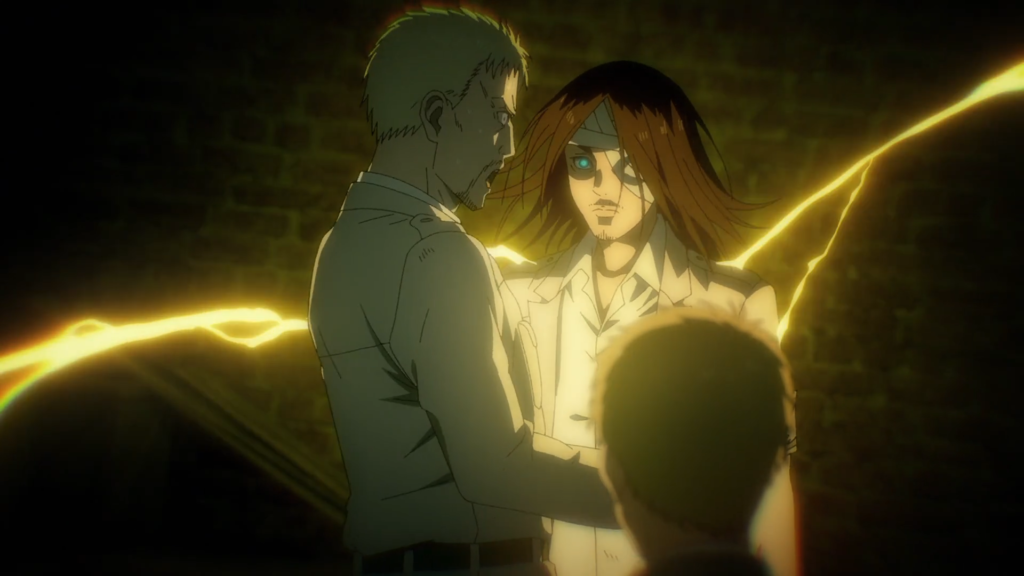 The latest season takes place four years after season three. Posing as a prisoner within the enemy nation of Marley, Eren has undergone a significant personality shift, especially after spending time away from his friends. In earlier seasons, Eren was a hotheaded soldier who used his strong determination to defeat the one enemy he knew, the Titans. But, after learning more about his country’s history and the Marley enemies, his personality mellows out, and he gains a different perspective on his purpose, choosing to direct his energy towards being proactive in his revenge against Marley.

This starts with his reunion with Reiner. If you watched this scene, you kinda feel sorry for both of them because Eren trusted Reiner enough to believe they were close. Even when he finds out Reiner was the Armored Titan that destroyed Wall Maria (and indirectly killed his mother), he understands why he did it and the circumstances he’s had to endure as an Eldian. 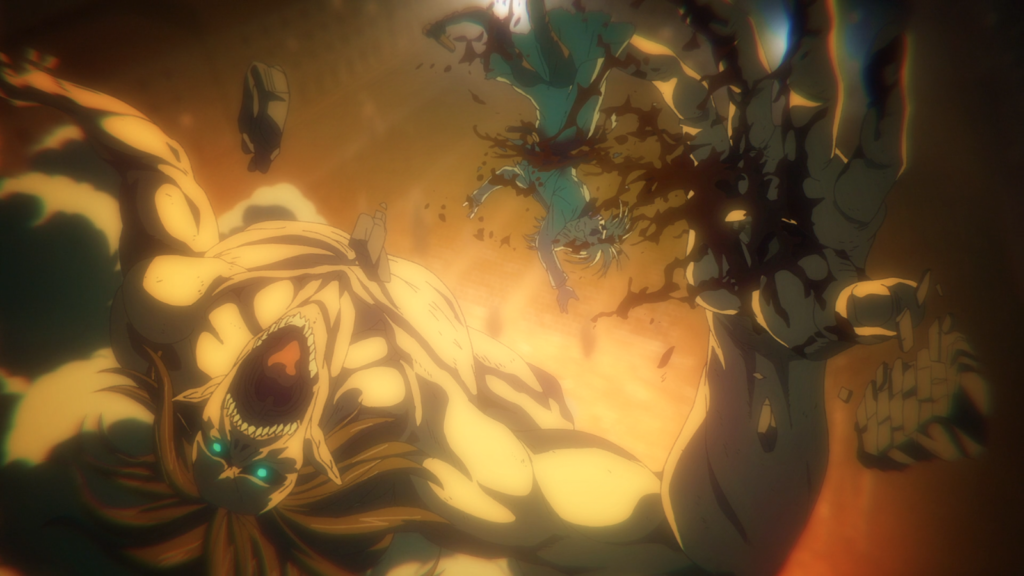 Which makes the next moment when Eren transforms and kills a Marleyan official in front of everyone all the more painful for Reiner. It’s at this point that Eren has taken upon himself to destroy everything that’s harmed him, his friends, and his family. He gains more power when he devours the War Hammer Titan user, utilizing its skills to escape unharmed with his worried friends. From here, Eren kickstarts a war he’ll end himself. 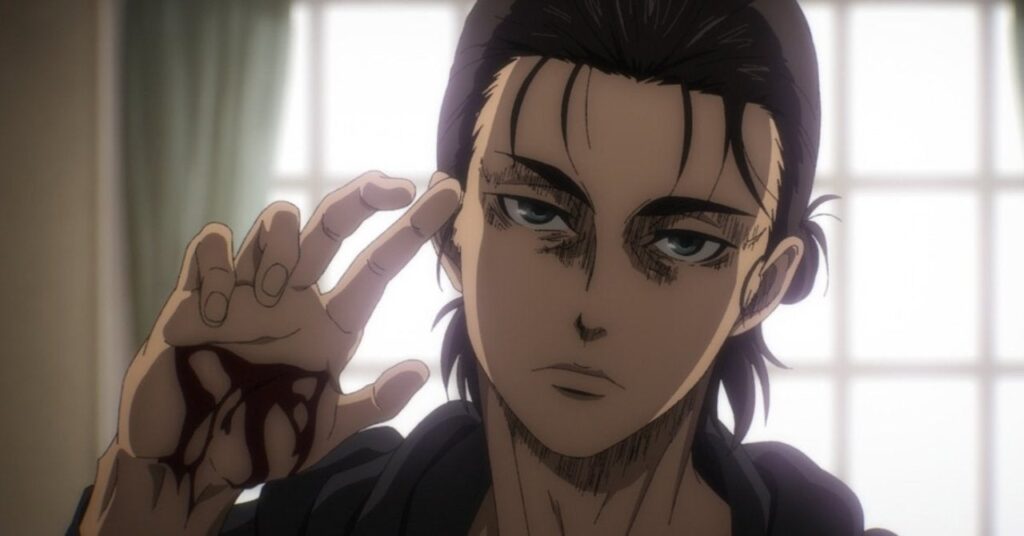 His actions gain steam as he becomes a revolutionary figure to rebels of the Paradis Military. They call themselves the Yeagerists who assist Eren in activating a cataclysmic event called the Rumbling. With this, Eren continues gathering more Titan power to eradicate humanity on the outside, telling Mikasa and his former friends to try to stop him. Having distanced himself from everyone, he takes it upon himself to end it all. Even if he dies a tyrant.

Manga readers will know what happens to Eren at the end of Attack on Titan, but I won’t go into that too much to avoid spoilers. Nevertheless, the series does an exceptional job of developing Eren’s personality and changing him from where he was in the beginning. We started the story with a young boy vowing vengeance against the Titans. Now, we end with a grand finale where the hero has become the villain and his friends try to save him from himself.

Attack on Titan is currently streaming on Crunchyroll and Funimation.