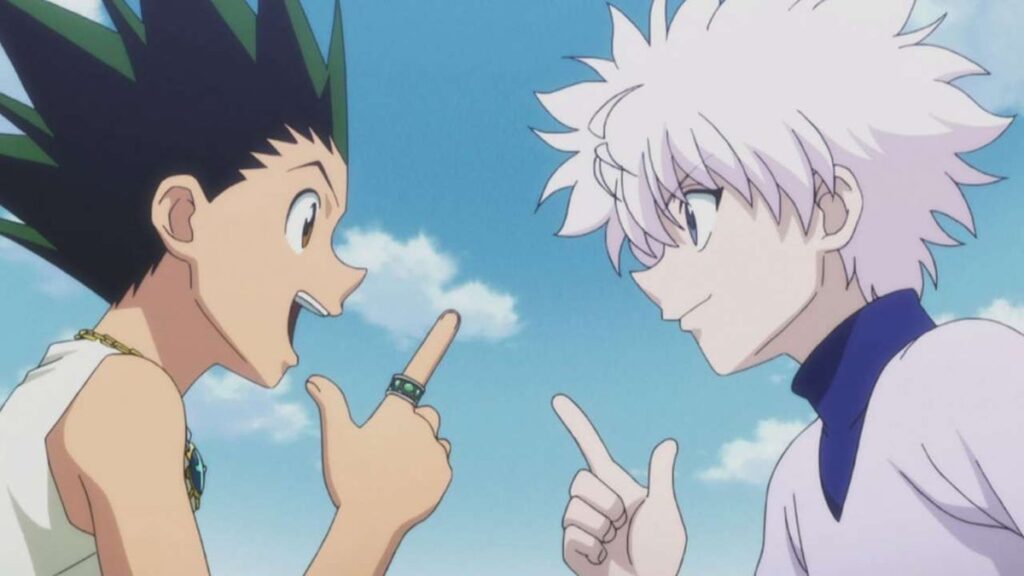 It has always tough being a Hunter x Hunter fan: despite how great the series is, the manga has always been plagued by constant hiatuses, making being a fan of the series more infuriating than it really ought to be. That being said, a recent interview conducted in last week’s issue of Weekly Shonen Jump (issue 26) sheds some light on the future of the series, and on author Yoshihiro Togashi’s attitude towards it as a whole.

The interview began with a discussion of Togashi’s career, starting with the now-legendary Yu Yu Hakusho in 1990 and then the lesser-known, short-lived science fiction story Level E in 1995. According to Togashi, when developing his next series Hunter x Hunter, he was mainly preoccupied with what would ‘catch on’, no doubt because of the short-lived success of Level E. Even so, he still wanted to make the series unique, and found a way to do this through the main character, Gon Freecss. By taking a character who seems like a ‘good kid’ and giving him a ‘scariness,’ Togashi wanted to surprise readers and keep them invested, and also make the series as a whole more interesting. In turn, this confirms what fans have been saying for years, that Gon is purposely intended to be subversive in his characterization and his later character development.

Nevertheless, it’s hard to talk about Hunter x Hunter without talking about its constant hiatuses, and Togashi didn’t exactly shy away from the topic either. He disputed the many fans who have accused him of not wanting to bother with the series anymore, stating that he still ‘has the drive to finish’ and genuinely wants to. It truly does seem that Togashi is impaired by things out of his control, namely his chronic back pain, which may put some of the more cynical fans at ease. Furthermore, he stated that creating manga in general is still very enjoyable for him, as he was constantly told he couldn’t do what he wanted as a kid (namely drawing) and so the fact that he now draws for a living gives him pleasure as a kind of ‘revenge’ against all those who got in his way.

Addressing another fan concern, Togashi argued that although ending the series after the Chairman Election arc would have made sense, he felt like he didn’t want to disappoint those who wanted to keep reading. Togashi also stated that if he was a reader, then he too would’ve wanted to keep reading, therefore he felt like ending the series at that point would’ve been a shame. Besides, he still had lots of ideas for the series, so decided to continue onwards. It does seem after all that Togashi works for the fans, no matter how much he seems to be set on disappointing them with constant hiatuses, again due to things outside of his control.

Togashi’s future post-Hunter x Hunter seems distant at this point, with Togashi himself joking that the end of the series might not come before he passes away, but he still has many things he’d like to do as an artist. For one, he’d love to try his hand at a love comedy, which definitely sounds like an amusing prospect. But he admits that to do something so different from his previous works would probably necessitate getting someone else to draw the art for him: a tactic many fans have been behind adopting for Hunter x Hunter itself in order to lessen the strain on Togashi and help the plot progress. At the end of the day, however, Togashi admits that he ‘has to finish writing Hunter x Hunter‘ before he can even think about his future, a good display of resolve that should reassure fans.

But one thing is for certain: Togashi will always consider Jump his home. When asked what Jump is to him, he replied: ‘It makes me think that I’d always like to be here.’ Togashi’s experimental and unique works have always found a home in the pages of Jump, a fact that sometimes seems contradictory to the content of his works, but something that Togashi truly appreciates. That being said, wherever you end up in the future, be it wrapped up in a new series or still slaving away at Hunter x Hunter, we’ll be here to support you, Togashi-sensei.