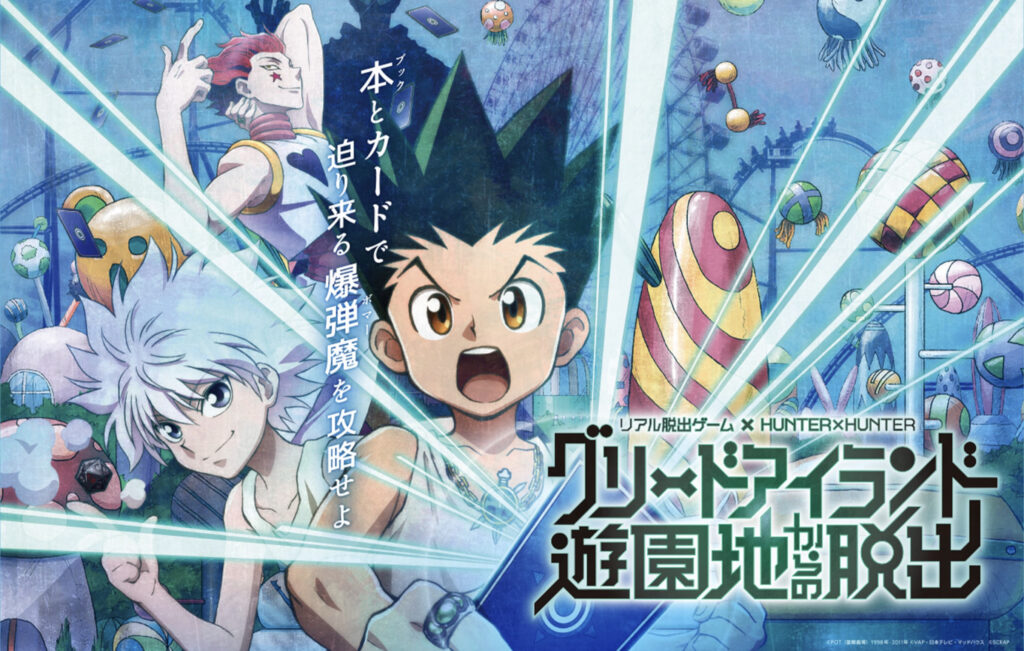 Starting this week, and not for the first time in the series’ history, the Hunter x Hunter franchise is getting a SCRAP escape room for fans to enjoy. Although there’s a limited amount of content that hasn’t been adapted into an escape room before due to the series’ current hiatus, unlike previous escape rooms this one will be adapted based on the Greed Island story arc within the original manga and anime. New information released today give us an insight into the game set to open in Osaka on Saturday, ahead of the Hunter x Hunter Greed Island escape room making the move to run in Tokyo Dome City Attractions from November where information has been unveiled regarding how the game will operate in that location as well.

The Greed Island story arc’s existence as a game within the series makes it a fitting story to adapt into an escape room. As part of this game, you will be designated as hunters who are trying to collect and complete a set of Greed Island Cards through completing various challenges. You’ll be completing these challenges ‘in cooperation with Gon and Killua’, and original voice acting from both these characters and others will be added to your journey through the various challenges to enhance the experience.

The game can be played with any sized group including just a single person as the challenge involves you wandering a theme park (in the case of Hirakata Park in Osaka) or an attraction area (in the case of Tokyo Dome City Attractions in Tokyo) and going on rides and participating in various other challenges over the course of an estimated 2-3 hours. In this sense, it’s a neat way to enhance your experience at these locations, particularly if you’re a fan of the Hunter x Hunter franchise.

The Hunter x Hunter: Escape from Greed Island escape room game from SCRAP will start from this Saturday in Osaka until November 29th, and run from November 10th until January 11th, as well as 3 Friday and Saturday operations from January 15th until January 30th in Tokyo Dome City Attractions. You can find out more over on the game’s official website.