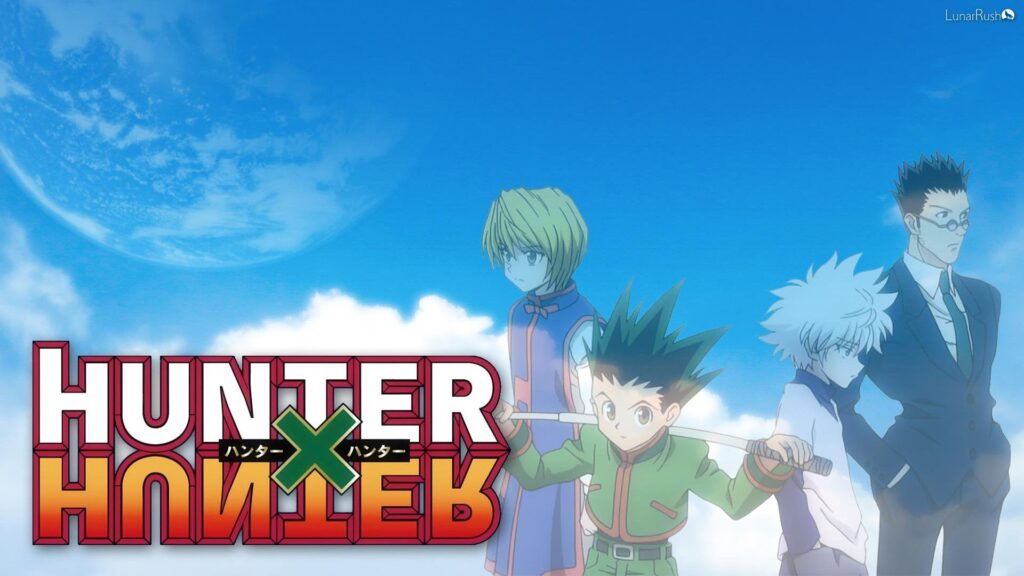 Hunter x Hunter is one of the most important shonen released in the past 20 years, no questions asked. Very few series have been as consistent as Yoshihiro Togashi’s magnum opus has, with each arc providing more than its fair share of exciting action sequences and emotional gut-punches.

From the crime noir thrills of Yorknew to the bombastically over-the-top mindscrew of the Chimera Ant arc, Hunter x Hunter is an action series that is all killer, no filler; a wonderfully told (and sometimes darkly dramatic) adventure story filled with exciting highs and lows.

With a smile on his face, Gon cheerfully declares to his friends ‘Y’see, I’m gonna be a Hunter!’ He then departs from his humble abode on the quiet Whale Island, with practically the entire village tearfully wishing him the best of luck.

Thus begins Gon’s journey to become a Hunter. But unlike other Hunters before him, he has no interest in the fame, riches, and power that comes with being a Hunter. He’s just out to reunite his father. From there, Gon’s mission evolves into an exciting, if not occasionally perilous, whirl of adventure and self-discovery.

The passages of Hunter x Hunter contain everything we love about shonen, from its fight scenes to its multi-layered arcs to its badass characters, while avoiding all of the usual trappings. It’s obvious that Togashi wanted to refrain from making another Yu Yu Hakusho, and refused to play into the cliched beat-em-up excess of shonen. The final result is a series that would shake the foundation of the genre forever. 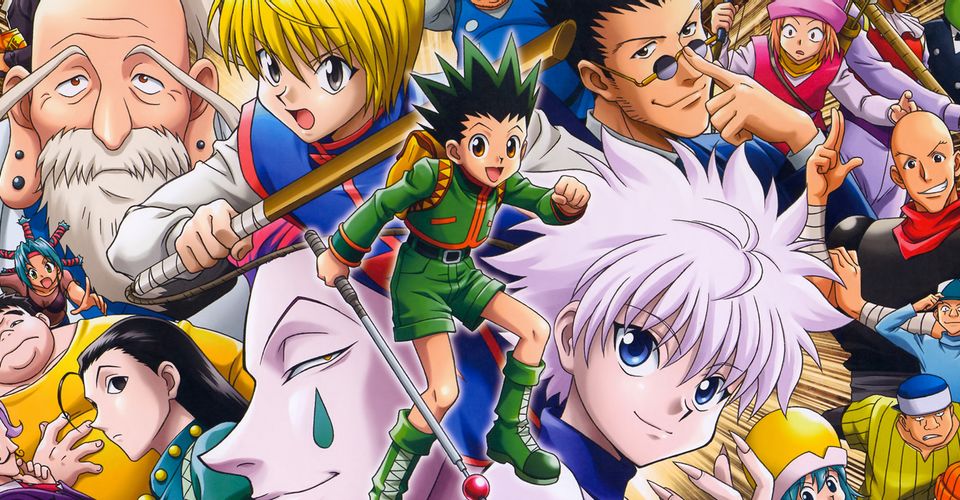 After Yoshihiro Togashi infamously closed the book on his hit manga Yu Yu Hakusho in 1994, he would make the sci-fi manga Level E. This three-volume series, released over the course of 17 months, served as Togashi’s retreat from the woes of creating shonen manga at breakneck speeds. But still, the man knew that he was destined to create another action series that followed up on Yu Yu Hakusho’s success. In an interview with Shonen Jump, Togashi admitted, ‘I thought that if I was going to write something next, it had to be a battle manga after all.’

Togashi would unveil the first chapter of Hunter x Hunter in Shonen Jump in March 1998, where it would become another immediate hit for Togashi. Along with its characters and stories, the passages of Hunter x Hunter would also become known (sometimes infamously) for its simplistic art style and its many prolonged hiatuses, with the first one starting as early as 2005. These two things, particularly the latter, are things the man had to apologize many times over.

Although it’s understandable that fans would get upset at Togashi, it’s also evident that the man is still haunted by the stress that came with writing Yu Yu Hakusho. When you spend all of your time obsessing over sales, readers polls, and how to properly finish story arcs, especially when you are overworked to the point where you lose sleep and sanity, it’s hard not to feel a bit sorry for Togashi.

Making matters even more complicated is that Togashi has been undergoing health problems that interfere with his work. Will we finally see an end to Hunter x Hunter? Speaking as a fan, hopefully so. But also as a fan, I understand that you can’t rush quality. Plus, if the man needs his rest, then let him rest.

The manga’s success inspired two anime: one in 1999, and another in 2011. When you go on the Internet, the 2011 version is the one that’s the most popular, and what most fans will tell you to go to. At the time of writing this, this iteration of Hunter x Hunter rests comfortably within MAL’s top 5, beating out popular titles like Death Note, Demon Slayer: Kimetsu no Yaiba, and most of Gintama.

It’s not hard to see why. The most obvious is that the 1999 anime was adapted a year after the manga was launched, and had to properly pace itself so as to not outrun the manga. Meanwhile, the 2011 version had 13 years for the ideas to develop and simmer on the backburner.

This makes the 2011 series the more ‘complete’ version, with the legendary Chimera Ant arc plus the follow-up 13th Hunter Chairman Election Arc included within its narrative. Fans of more modern anime might also prefer the cleaner and more polished look of the 2011 series, impressively animated by the folks over at Studio Madhouse.

None of this is to say that the 1999 anime doesn’t have its own things going on for it. For starters, the animation, while admittedly draped in slightly aged 90s shonen aesthetic, is still an imaginative (if not a touch darker) take on Togashi’s work. Plus, you’ve got a young Kazuhiro Furuhashi directing all 62 episodes of this series. Considering how he had just gotten done directing Rurouni Kenshin and You’re Under Arrest, this is proof that sometimes good things come in threes. 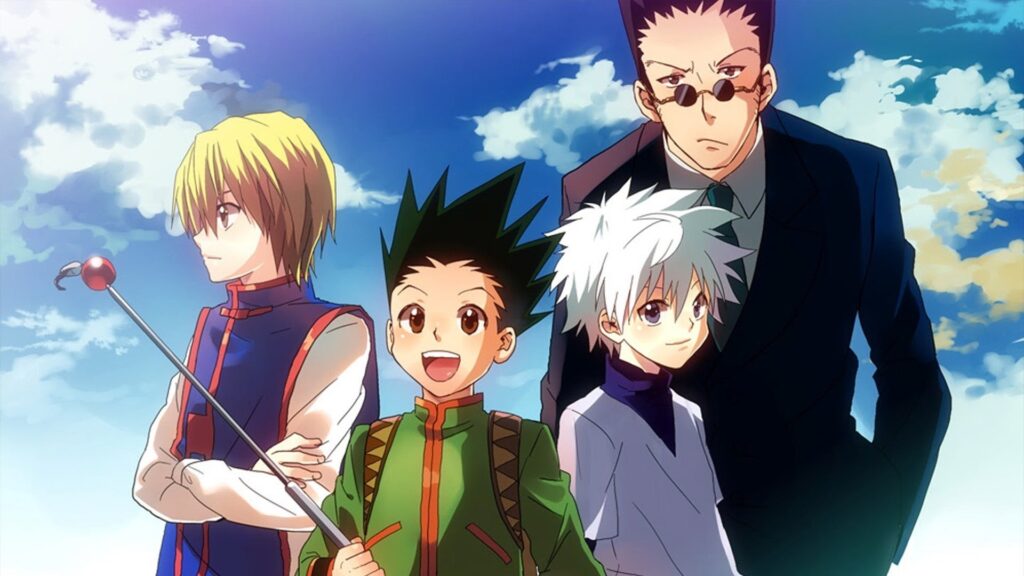 Armed with a fishing rod, froggishly green attire, and a heavy dose of optimism, this doe-eyed island native is one of shonen’s, if not all of anime’s, most recognizable characters. At the outset of Hunter x Hunter, a (seemingly) parentless Gon living alone with his aunt gives you the impression that he’s going to end up being the classic chosen hero, like Goku or Harry Potter. But as they say, that ain’t it chief.

Sure, Gon is powerful enough to lay heavy blows upon those who dare challenge him. But he’s no invincible powerhouse. In fact, the kid doesn’t even win all of his battles. Even when he gets his Nen abilities later on, he’s no match for some of his toughest rivals. But this vulnerability is the core of his character, presenting something other than your traditional overpowered shonen protagonist.

A wildly silver-haired young boy, Gon’s right-hand man, and someone with impeccable fashion taste. Killua Zoldyck initially comes onto the scene as a playful, if a bit mischievous, young lad who loves skateboarding. However, behind those innocent-looking blue eyes lie the soul of a cold-blooded killer.

Killua comes from a history of assassins known and feared for their ultraviolent style of fighting. Killua is just a teenager, but he already has survived enough death-defying training and torture to heighten his psycho killer senses. Those who have underestimated his power have had their heart ripped out Temple of Doom-style, so beware.

Kurapika is a chain-wielding warrior driven by one goal: revenge. When the Phantom Troupe came in to murder his entire clan for their precious scarlet eyes, Kurapika swore that he would make it a life-or-death mission to seek out and destroy every single occupying member of the Phantom Troupe.

While normally a calm and calculated individual, Kurapika’s own eyes will burn with a violent scarlet, causing him to burst in a violent rage that spares nobody. His defining moment? Using his deadly chains to straight up murder a giant. If that wasn’t enough, Kurapika brought a shovel to the fight, knowing that he’d end up having to bury the giant’s corpse after the bloody affair was over.

‘I want money! Lots of money! Money gets you anything!!’ So smugly says this Arsène Lupin III doppelganger during his character introduction. It seems that his desire for being a Hunter is a greed-driven one, wanting the riches and opulence that come with it. However, this is quickly revealed to all an act. Leorio’s real mission is to use the money to become a doctor so he can heal the sick and the crippled. A jerk with a heart of gold, indeed.

Gon and company’s huge rival comes in the form of a creepy clown. Getting his sick kicks out of inhuman acts of violence, Hisoka is all but a laughing matter. He looms over Gon, obsessing over the young boy’s budding strength and prowess in combat. Hisoka could easily wipe the floor with Gon’s blood, but holds himself back in the hopes that Gon will one day become a worthy opponent. To Hisoka, victory is important, but not something he wants so easily.