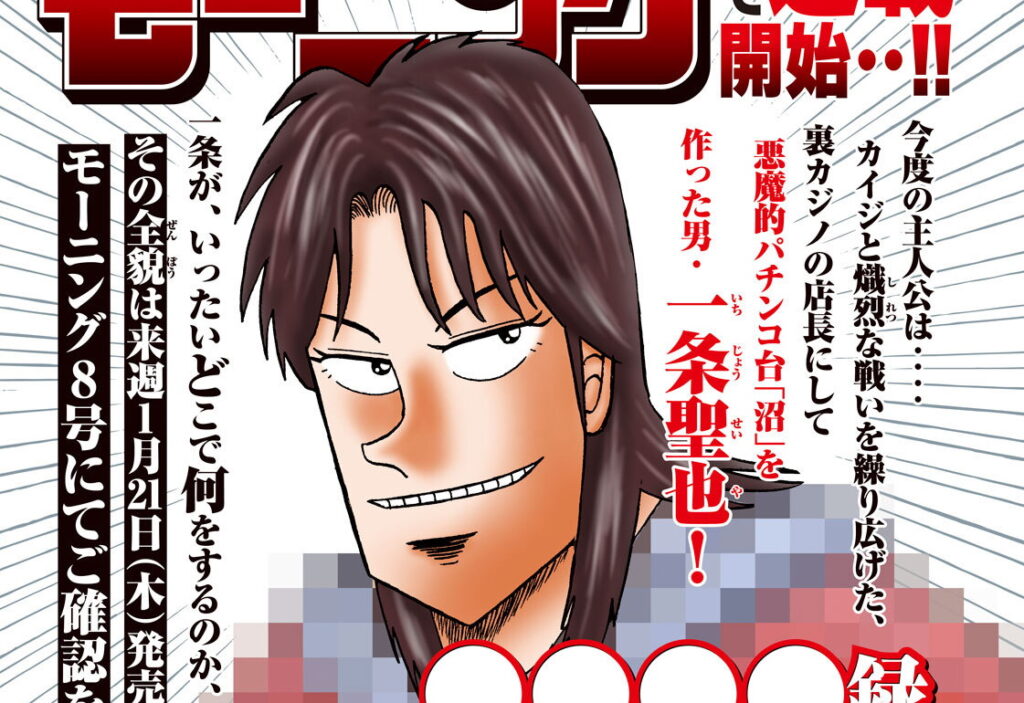 In part two of Nobuyuki Fukumoto’s Kaiji, the protagonist, Kaiji Itou, comes up against a fearsome opponent: Seiya Ichijou, a crooked casino owner who tries everything in his power to prevent him from winning the 700 million yen jackpot that sleeps under the infamous pachinko machine ‘The Bog.’ Ichijou is a great character from a fantastic story, which is why it is exciting news to hear that he will be receiving his own spinoff.

Announced in this week’s issue no. 7 of Weekly Morning, the spinoff will launch next week (21 January) and be brought to us by author Tensei Hagiwara and artists Tomoki Miyoshi and Yoshiaki Seto.

Those first two creators were also behind another Kaiji spinoff manga, Mr. Tonegawa, alongside Tomohiro Hashimoto. As to why Hashimoto hasn’t returned for this new Ichijou spinoff, who knows, but what is exciting is that two-thirds of the creative team behind Tonegawa are attached to this new Kaiji project.

Despite being arguably the exact opposite of what fans wanted when it was animated, Mr. Tonegawa was a strong series in its own right. It took the tense, psychological approach of Fukumoto’s original storytelling and applied it to the mundane, exploring the melancholy life of its main character, Yukio Tonegawa.

Its success also meant that it spawned a whole legion of subsequent spinoffs, including the upcoming Ichijou series but also 1-nichi Gaishutsuroku Hanchou (Chronicle of a Single Day Release: Hancho) for publisher Kodansha.

Ichijou is also a great choice for a spinoff series. His rivalry with Kaiji in the second part of the manga is tense and exciting, and his personality is flashy and outgoing. His back story also provides plenty of room for exploration: he started out his career at the shady Teiai Group cleaning toilets, after all, so it’d be great to see how he got to where he is when we meet him in the second part of the story.

It’ll obviously have to be set after that,  given that he got sent to the underground mines for failing to prevent Kaiji from winning the Bog’s jackpot.

The Ichijou Kaiji spinoff will launch next week under a hitherto unrevealed title. You can win a prize if you guess it right on Twitter.