There is ordinary cosplay, and then there is this amazing, beautifully choreographed YouTube video posted on Tuesday by a Kyushu-based dance group. Check it out:

The video was created by video game director Ikumi Nakamura, who tweeted about ‘the challenge’ on Thursday. Her video highlights the Hinokami Kagura no Kokyu (Dance of the Fire God Breathing Style) from Demon Slayer: Kimetsu no Yaiba.

The video also features the dance group Dazaifu Mahoroba-shu, a masked dance team which performs the traditional music and dance of their hometown of Dazaifu in Fukuoka Prefecture.

Incidentally, the video is part of a longer video by Nakamura, which honors the Heian scholar, poet, and politician Sugawara no Michizane, deified in Shinto as Tenjin.

In the series, the Hinokami Kagura is a special breathing style used only by the Kamado family, and passed down from generation to generation. The dance seen in the video is specifically based upon the ritual version that Tanjiro’s father, Tanjuro, demonstrated.

The kagura seen in the anime series is based upon Shinto kagura ritual dance. In addition, the video was filmed at the actual Kamado Shrine on Mount Homan, a sacred mountain in Dazaifu. (And yes, the shrine has become an anime pilgrimage site, besides already being historically and culturally important.) 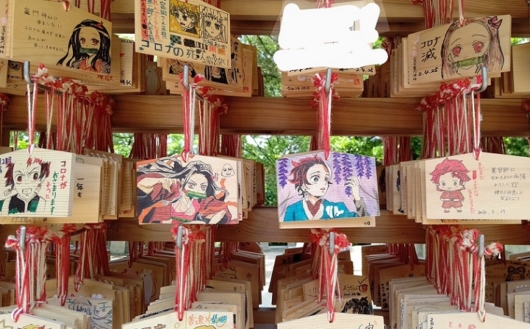 Demon Slayer manga artist Koyoharu Gotouge was born in Fukuoka Prefecture, so all the pieces fit together nicely.

During the shooting, I, the crew, and the dancers were surrounded by a very solemn atmosphere. pic.twitter.com/TwO0JQsMP9