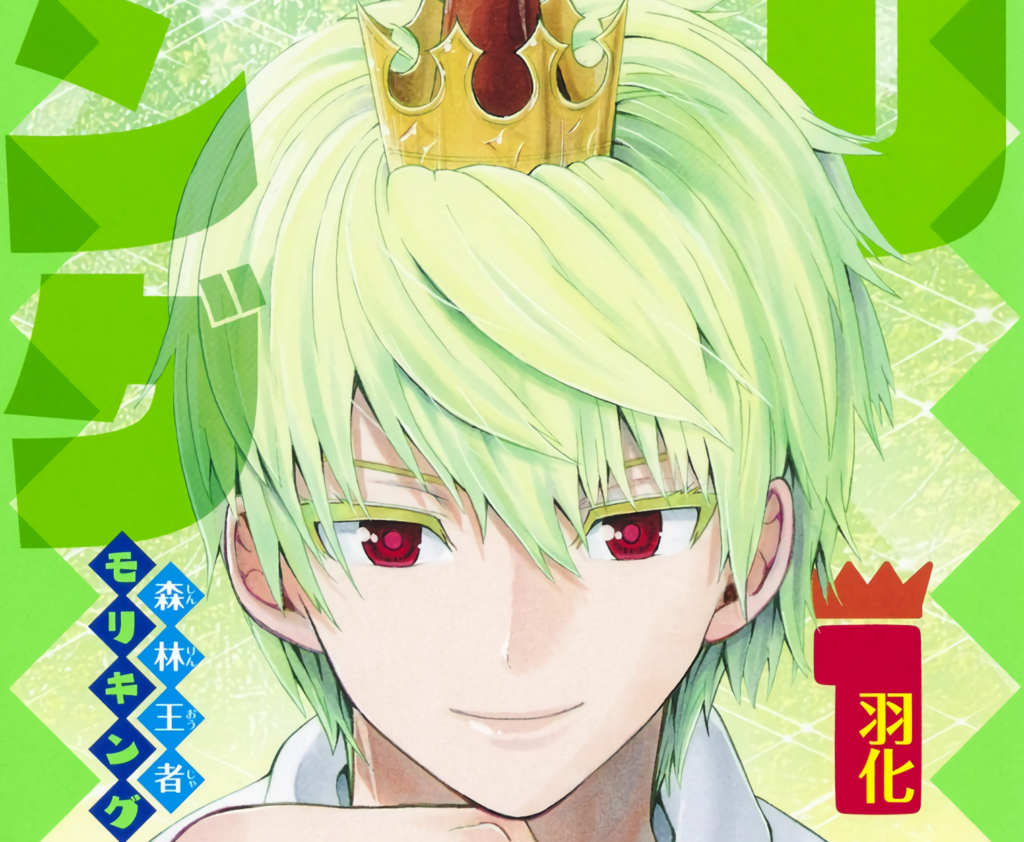 Moriking is a series that is in need of defending.

When I first started writing this piece, the sales figures for the series’ first collected volume had just come out, suggesting that cancellation was on the way. Fast forward three months, and the series is in a strange place: sales figures continue to falter, but it appears to have started a new arc. There might still be time left, then, to support this series and recognize its good qualities – which is exactly what this article intends to.

Moriking is written and illustrated by Tomohiro Hasegawa, a relatively experienced creator who has been published in Weekly Shonen Jump two times before: in 2013 with Koi no Cupid: Yakenohara Jin and in 2016 with Spring Weapon Number One. Spring Weapon, in particular, was something of a success for Shueisha, lasting for seven volumes – Hasegawa clearly, therefore, has a pretty solid track record.

It is this experience that probably allows Hasegawa to craft one of the most original gag manga I have read in a very long time. That doesn’t mean that it doesn’t have its faults, as we shall see, but that its ideas deserve to be appreciated by a great many more people – possibly saving it from cancelation as a result.

Moriking’s setting is probably one of the most outlandish and unique things I have ever seen. Taking place in a world where insects evolve from larvae into fully-formed humans, it is a cross between Pokémon and Nichijou in the most bizarre way possible.

Structurally, Moriking centers itself around the fight between various ‘candidates’ to choose the titular ‘King of the Forest’ (Moriking literally means Forest King) – it is, therefore, a battle royale series like the seemingly millions of others that have come before it. 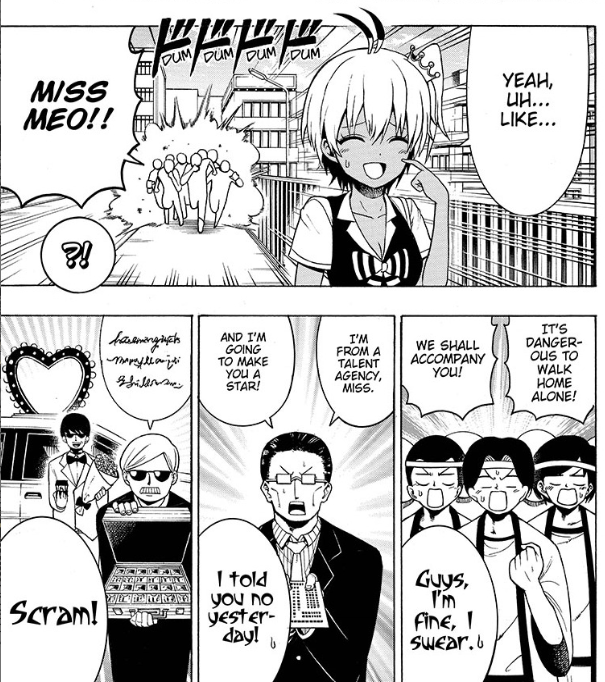 Nevertheless, that’s not the only thing Moriking has going for it. One of the reasons why I am gunning so hard for this manga is because of how much it dedicates to this premise, showcasing an incredible attention to detail. One great example of this comes in chapter 15, when one of Moriking’s opponents for the throne, Meo, enters the story: she is an anthropomorphized giant Asian hornet and, by virtue of her gender, makes everyone bow down to her – Hasegawa has clearly thought through how a queen hornet would function in real life.

This attention to detail is even evident in the series’ early chapters, when Moriking was coming dangerously close to becoming a battle manga. At the time, I wasn’t too happy about it – if fine with seeing where it went – but now I appreciate it a whole lot more.

When Moriking goes up against Oka – an anthropomorphized praying mantis – he is able to withstand her blows due to his thick carapace; her strong arms, however, make for powerful attacks. When Oki is introduced – a great purple emperor – he of course doesn’t want to fight, as he is a butterfly. Instead, they compete in competitions to find out who is the best. And when it comes time for Moriking to introduce what appeared to be the final boss – Oga – of course it was a stag beetle, as that is the only other insect that could hope to match up to Moriking’s thick rhinoceros beetle carapace. And so on and so on.

Moriking has all of the signs of an author who has spent way too much time thinking about how insects would fight in the real world, which is a good thing. Whether or not that thinking took place as a child or an adult, that’s besides the point – Moriking is a more entertaining and more robust manga because of it.

That being said, Hasegawa does struggle to meet this detailed setting sometimes with entertaining plotlines. At worst, he resorts to parody of the most pandering nature (collectible trading cards, Star Wars monologues, spirits bombs, etc.) and at best, he just focuses on stories or characters that don’t get across the series’ main appeal: one example being chapter 21, which attempted a murder mystery around the question of ‘who ate the pudding.’ Who cares? 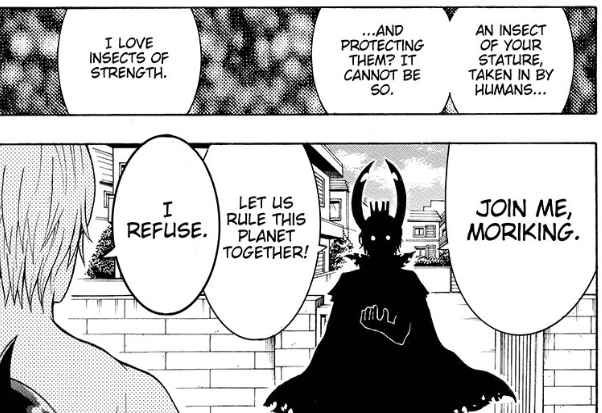 Moriking’s inconsistency is what probably prevents it from being read by a greater number of people. And that is a shame, as it has so much more to offer than what we’ve had chance to talk about: the soldados, for one, as well as the intriguing world-building.

For the time being, it doesn’t seem as if Moriking is going to be canceled. However, that could change at any time. So, if you have a spare minute, I’d encourage you to check it out for free via VIZ Media and tell us what you think, either via social media or our Discord server, linked below.

When so much of the Weekly Shonen Jump line-up appears to be dominated by series openly attempting to recreate Demon Slayer: Kimetsu no Yaiba’s success, you can’t help but appreciate a little bit of originality. And in many ways, that is exactly what Moriking is: a deeply original story, as well as one of the smartest Shonen Jump gag manga in a very long time. I hope that Hasegawa gets another chance.