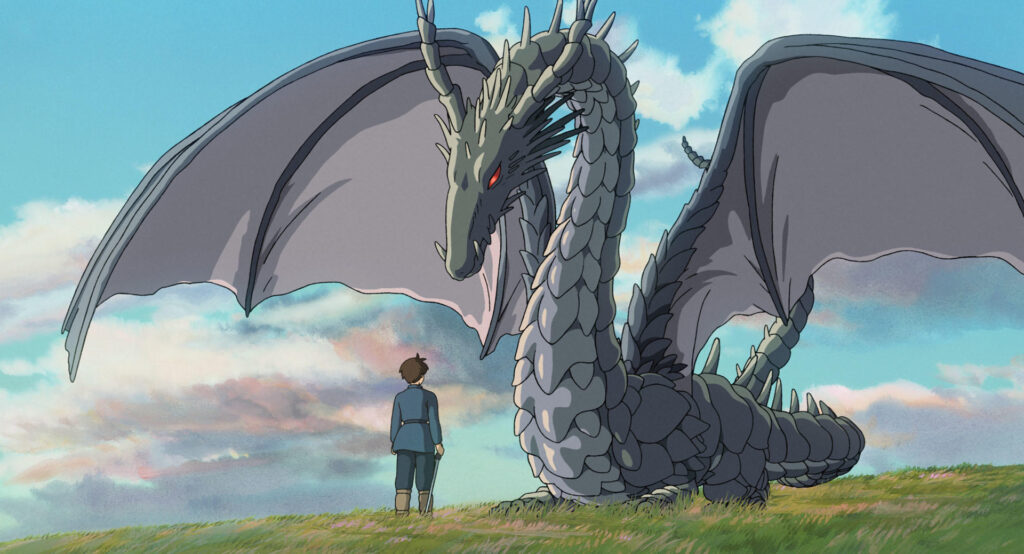 In Defense of Tales From Earthsea: Terrible Adaptation, Engaging Movie

Tales from Earthsea is, shall we say, the runt of the Studio Ghibli litter. In the same breath as fans will line up at cinemas for re-releases of Spirited Away and Princess Mononoke, they’ll ignore this movie with a reflex response along the lines of ‘every film the company has made is superb, except Tales from Earthsea’.

Studio Ghibli’s Tales from Earthsea is no masterpiece, I admit, but the film is worth far more than universal disdain. A faithful adaptation this is not, yet Goro Miyazaki crafts a new experience from the foundation of Ursula Le Guin’s seminal fantasy series, and outright dismissal of this film feels overstated and extreme.

This article contains spoilers for Tales from Earthsea (2006)

You have been warned 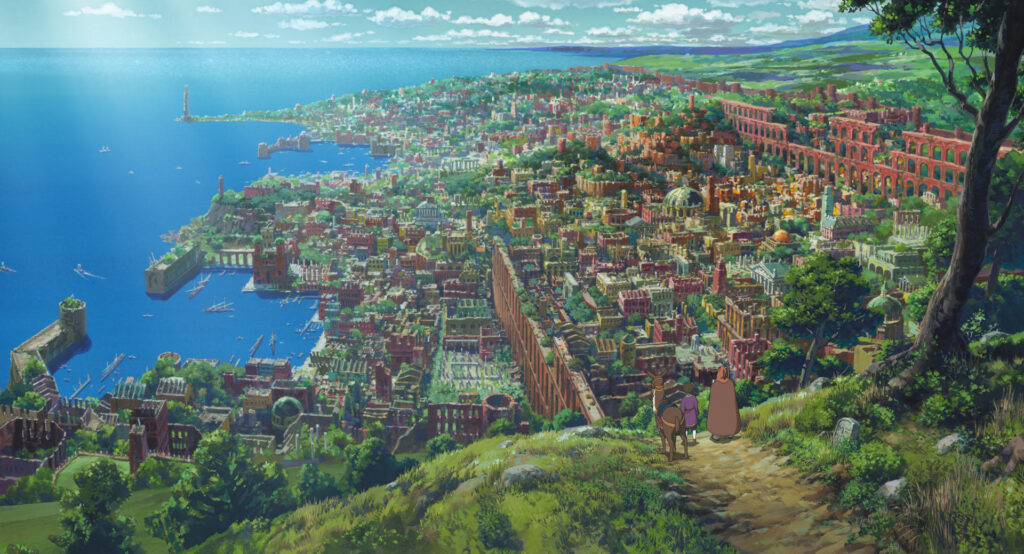 The Problem of Adaptation

Let’s rip the bandaid off right from the beginning: Tales from Earthsea is terrible from the perspective of adaptation. Ursula Le Guin’s fantasy series of books crafts a magnificent, expansive world over the course of a number of books and short stories, weaving into its pages themes like humanity’s relationship to nature, gender, coming-of-age, and more. Characters are built up not just through the words we read but the stories we are told of them that we never get to experience, with legend combining with fiction to craft a living, breathing world.

Careful world-building can’t be matched in movie form in less than two hours, never mind one that refuses to tell a straight adaptation and instead borrows ideas from across the franchise to craft a new tale. To promise an adaptation that turns out to be little more than a film masquerading as such is bound to annoy series fans regardless of how liberal they are to changes between mediums. As a major fan of the themes and prose of Le Guin’s work, this remains a disappointment on every visit. 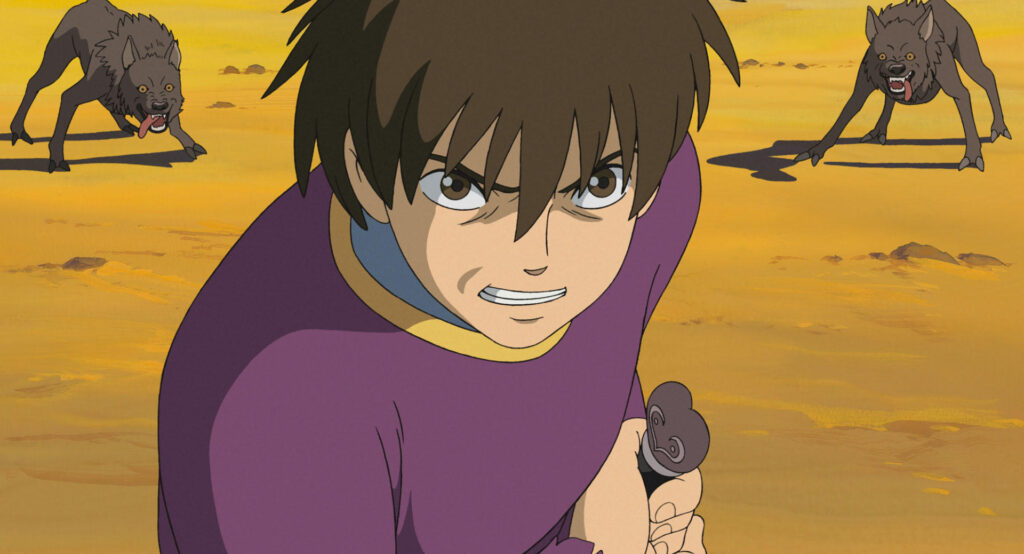 And this is before we get into topics of whitewashing. In a response to the movie, Le Guin herself noted that she made a moral choice to portray most of the characters in the world of Earthsea as non-white, with white characters being seen as backwards and villainous. With darkness of skin being associated with villainy, it attempted to flip this narrative within and outside the fantasy genre. In the film, however, most characters visually appear white, erasing this while, more importantly, denying representation in a major Ghibli film as we have yet to see in the years since.

Immediately, just from these considerations, it’s clear Tales from Earthsea from Studio Ghibli is Ursula Le Guin’s story. Where my view differs is in the argument that there’s a valuable experience sitting at the core of Tales from Earthsea worth exploring on its own merits. 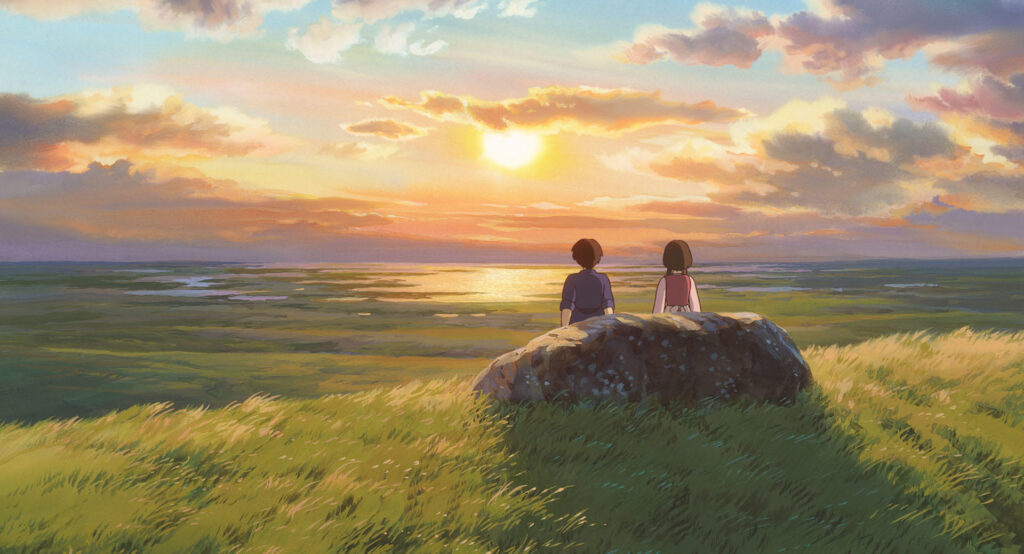 Tales from Earthsea’s story centers on balance. Balance is a core idea within the Earthsea universe, wherein a balance between all beings and events must be maintained for the good of the world. This idea is generally considered beyond the personal, and acts as a commentary to our disharmonious and exploitative relationship to nature.

As much as the film borrows from a number of disparate areas of the universe for its story, it’s the decision to turn this central theme of the series inwards onto Arren that is both the greatest departure and greatest strength of Ghibli’s take on Ursula Le Guin’s classic.

While translating the theme of balance into an internal conflict is something which also exists within the original book, none of these places the conflict as central to the narrative as Goro Miyazaki’s interpretation of the text. The film begins with Arren killing his father without any probable cause, and over the course of the film we see Arren constantly in battle with his darkest impulses. This other side to Arren serves the story as a manifestation of his self-doubt and self-hatred, alongside his fear of the unknown and of death that paralyze him from changing himself. 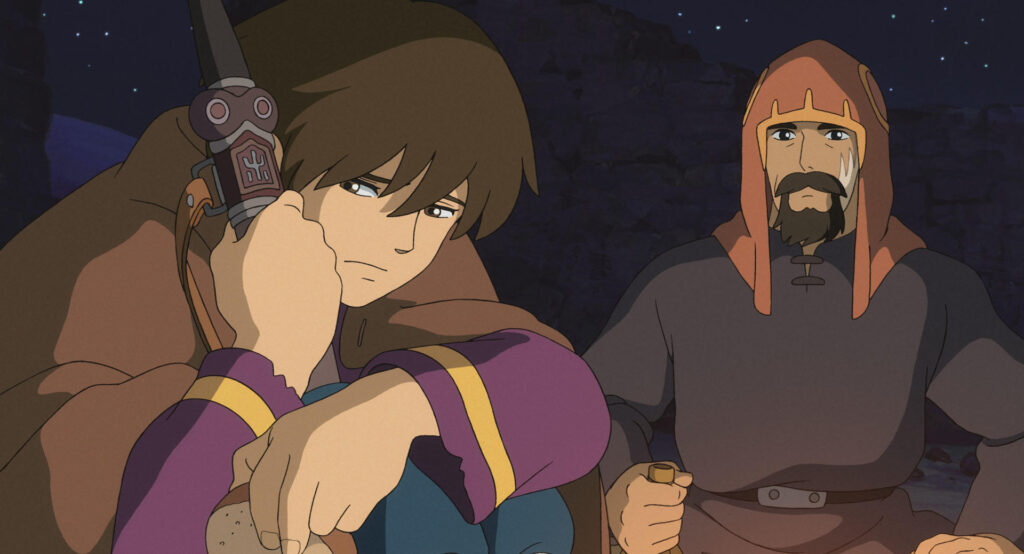 Perhaps the reason why Tales from Earthsea always struck me more than it did for most, and in spite of its flaws, is that I could see a lot of myself in Arren. His battle with depression and his longing for self acceptance hits differently today than it did when I first saw it. Sure, we have an antagonist in the sorcerer Cobb who wishes to permanently unbalance the world around him by crossing the barrier between life and death, but the only reason he has a chance of succeeding in his aims is because Arren is longing for an escape from his torment as opposed to tackling it, causing him to fall into Cobb’s grasp.

Arren’s eventual friend Therru and Cobb play a pivotal role in this allegory as two sides of a coin that represent his future. Therru is a young farm girl under the watchful eye of Tenar and, though they don’t get along at first, they begin to understand one another as two people who have gone through hardships before their meeting.

Therru was abused and burned by her birth parents before ending up in Tenar’s care and still brandishes scars from this. However, far from languishing in despair, she found a new appreciation for life and the fleeting nature of it, celebrating it in all its forms from the baby lamb to her own existence. While she can never truly be free of her past, she has grown from it. 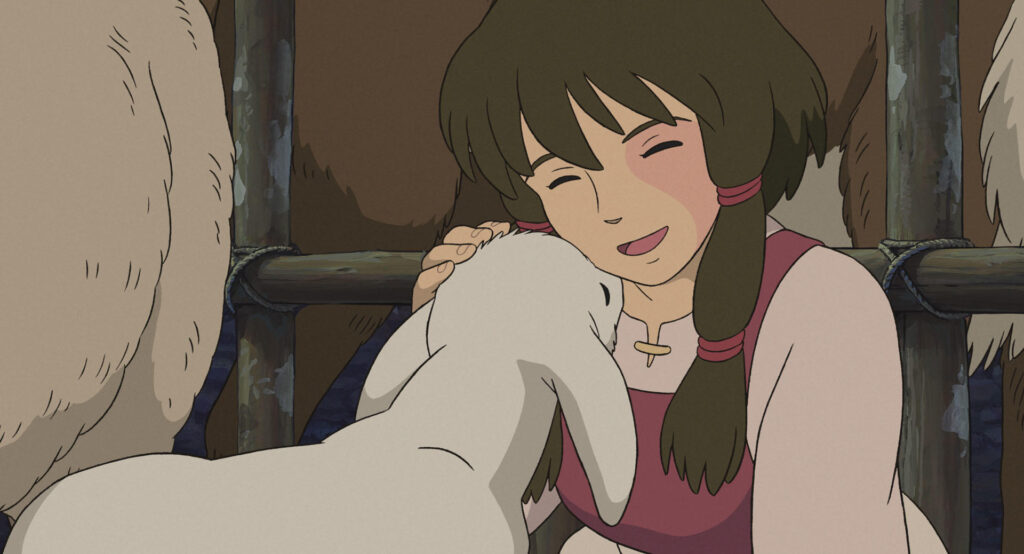 Cobb represents Arren’s impulses taken to the extreme. They wish to cross the border of life and death, permanently unbalancing the world in the process, and they want to take advantage of Arren’s own insecurities to do so by taking control of him using his ‘real name’. While amplified to give the film stakes in the final act, this is a representation of how the people who care for him would be impacted if he chose to take his own life.

To avoid this fate, he must confront himself and his emotions and learn to rely on others for support as he does with Therru (a move sealed as he learns her true name), taking the first step towards self-acceptance and change. The world isn’t saved by vanquishing the darkness, but by reaching out a hand and taking steps to improve himself.

Tales from Earthsea and The Weight of Expectation 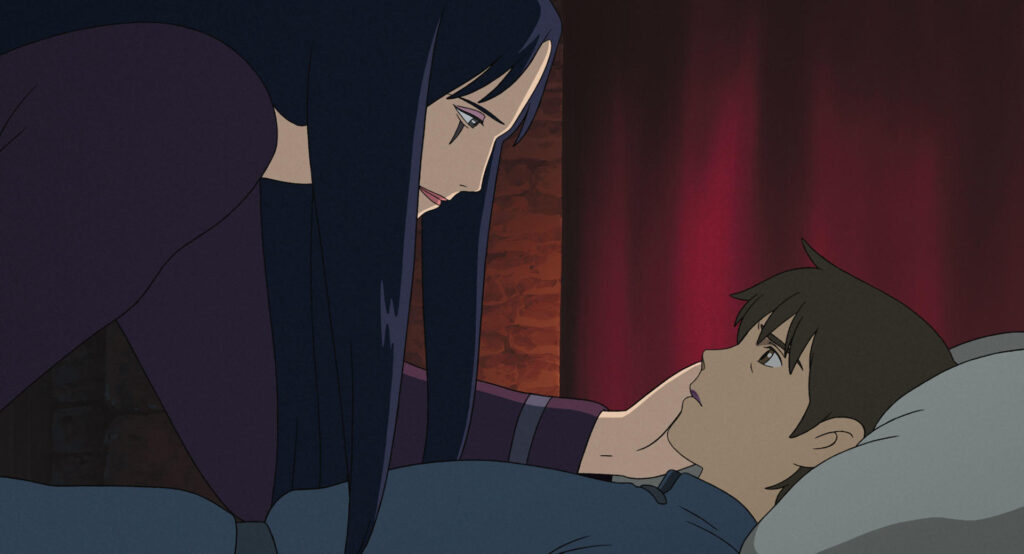 What comes from this is a wonderful exploration of trauma and depression through the lens of fantasy storytelling. But at the same time, it isn’t Earthsea, and you can’t help but wonder whether the film suffers for its association with the property.

Ignoring reputation, an attempt to half-adhere to the world of the books hurts Tales from Earthsea by failing to fully explain concepts important to the books, such as true names. Despite being so vital to the film, a clear explanation to this is never given, making it difficult to pick up without prior knowledge. It’s not the only part of the film that suffers like this.

Creating a new fantasy world centered on the internal conflict of Arren would likely have been more effective for removing the weight of expectation and avoiding such confusion. Areas such as the violence of the film that betray the tone of Earthsea could also be avoided. 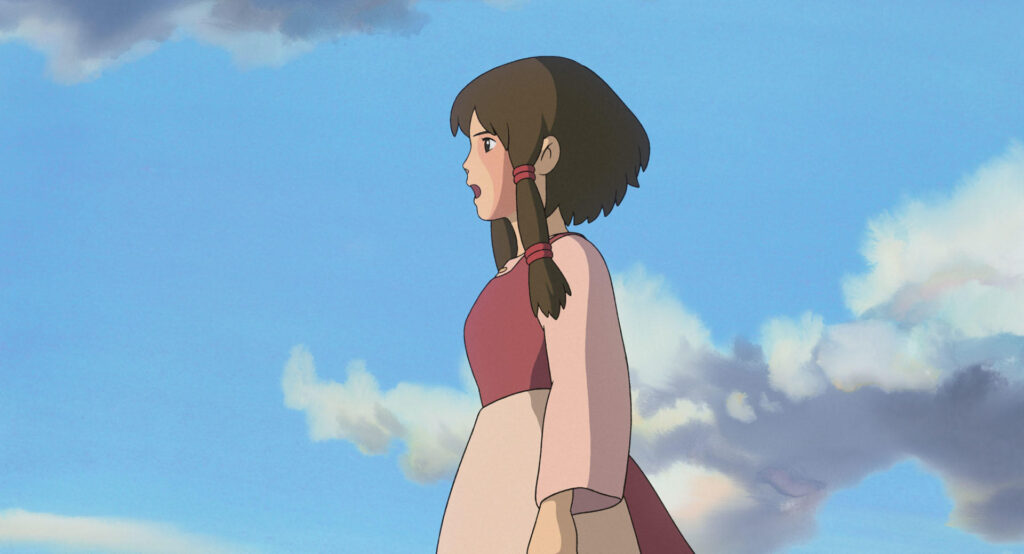 This isn’t Earthsea, and it certainly isn’t the Hayao Miyazaki adaptation Le Guin had once hoped for, but it isn’t ruined because of it. I can’t help but disagree with much of Le Guin’s confusion over elements of the story as being a result of viewing the movie too closely to her own creation, which is understandable, but isn’t what Tales from Earthsea sets out to achieve.

Next time, watch Tales from Earthsea with eyes unclouded by expectation and adaptation. You may be surprised.