My naive elementary/middle school self used to think The Prince of Tennis was just your average anime series about sports.

I remember borrowing a copy of the first season from my local library (back when anime was still relatively new in the States) and thinking it was decent. I decided to share The Prince of Tennis with my tennis-inclined best friend at the time and we enjoyed the first few episodes despite her favoring live-action fare in general.

Like other shounen, this show is built on our protagonist’s personal growth as an athlete and as a teammate during tournament arcs, such being the norm for sports anime, but with that said…it also spans one-hundred and seventy-eight episodes.

A lot can happen in that time.

I met an upperclassman with a love-hate relationship with the show and she showed me not one, but two insane clips of later episodes involving someone summoning a meteor (in fact, the very meteor that killed the dinosaurs) and another with a tennis match on a cruise ship of all things. A flooding cruise ship.

As it turns out, the anime I once remembered as being normal was not without the fancy “attacks,” brooding, and “power level” nonsense shounen is both loathed and loved for.

So without further ado, let’s take a look at The Prince of Tennis. 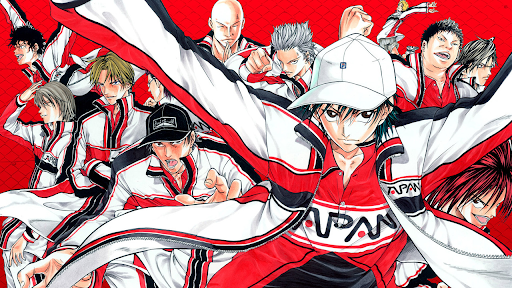 Takeshi Konomi’s coming-of-age/sports manga The Prince of Tennis originally ran from  1999 to 2008 before being adapted for anime by Trans Art and Production I.G of Ghost in the Shell fame from 2001 to 2005.

Konomi’s debut manga-turned-franchise is what he’s the most well-known for, and to the man’s credit, he’s not in desperate need of developing any other project.

Around the same time as the first wave of OVAs, two films were also released.

The first was the standalone anime film Tennis no Ōjisama Futari no Samurai The First Game (its subtitle translates to “The Two Samurai: The First Game,” 2005). The second was a live-action adaptation film (2006) based on a condensed version of the original’s first season up to the start of the National Tournament arc.

And that’s just skimming the surface of the show’s live-action material.

But first, just who is the protagonist at the center of it all?

Who Is The Prince?

The titular “Prince of Tennis” is a twelve-year old tennis prodigy named Ryoma Echizen whose insane level of skill speaks for itself (i.e competing with high school tennis players).

What I found the most interesting about our protagonist upon seeing him in his element was the fact that he starts out a prodigy.

While this isn’t completely out of the ordinary, it’s still fairly uncommon for sports anime to forego the “easier” underdog narrative in lieu of a set-up with much less tension.

Rather, Ryoma’s arc is one of learning to be less arrogant and distant while picking up new skills from his older peers at Seishun Academy.

Ryoma strikes a solid balance between cold, headstrong, and passionate, traits that can be equally difficult to manage when writing non-underdog male characters…or shounen male characters in general. When it comes to shounen, I feel like guys are only allowed to show passion should it be linked to baser instincts (i.e eating, fighting) or revenge.

However, I never once found Ryoma too mean or unwilling to adapt.

With that said, Ryoma slowly warming up to Seishun’s tennis team begins with its stoic captain Kunimitsu Tezuka (whose borderline supernatural “spin” techniques are part of the show’s charm and problem with realism) and friendly teammate Takeshi Momoshiro.

The Legacy of The Prince of Tennis

As I mentioned before, The Prince of After School and The New Prince of Tennis manga are the most recent entries in the franchise, being ongoing series and all.

Though, what sticks with me the most aside from the anime’s weirder tennis “attacks” is the fact that Musical: The Prince of Tennis (2003), often referred to as TenniMu, exists. That’s right, the original manga was adapted into a manga-musical with its current run having ended in May 2020.

Needless to say, it’s one of those things that needs to be seen to be believed.