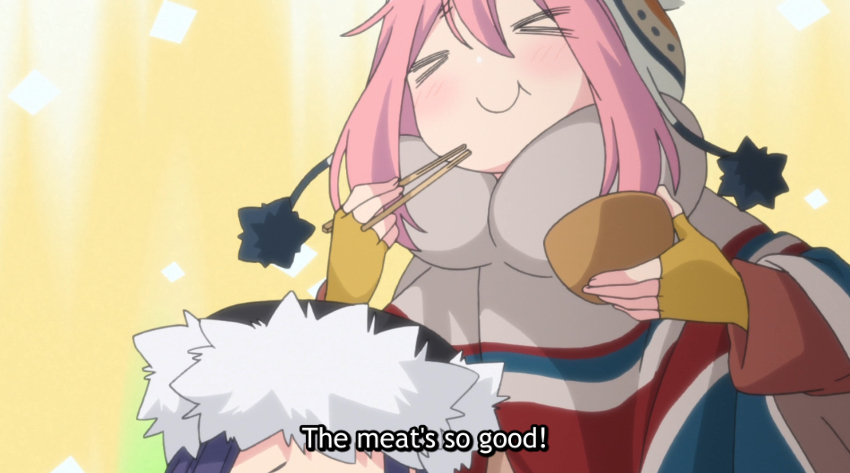 A lot of people, including right here at OTAQUEST, have commented on how comfy and cozy Yuru Camp (Laid-Back Camp) is. Of course, even if you’re not a fan of the series, you probably already know the show’s easy-going reputation. But… have you noticed how much Yuru Camp revolves around food? It’s no Food Wars, but the joy of eating is still a major part of the series. 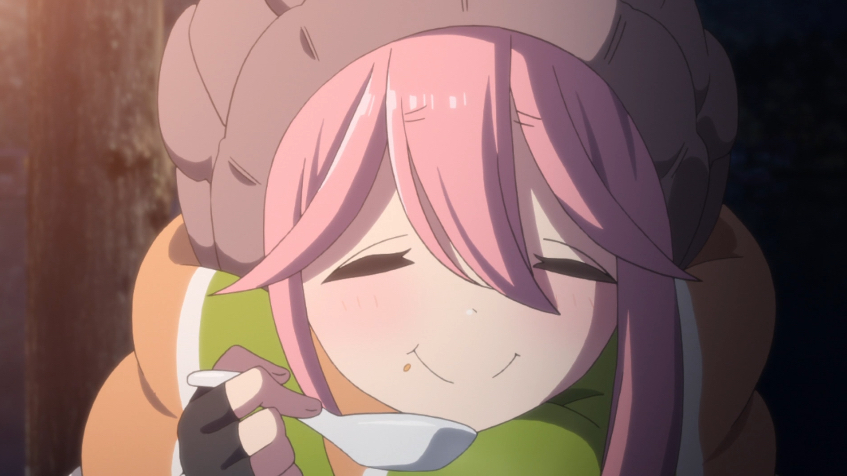 Nadeshiko is a huge part of the reason for this. She loves to cook and loves to eat. Her expressions of sheer enjoyment when she’s munching on something tasty are priceless. The girl apparently has a bottomless pit for a stomach. But the others also seem to love food more than the actual camping.

Indeed, the food in Yuru Camp reinforces a point I made in earlier food-related articles: Japan is a gourmet society, with a strong interest in cuisine, especially regional and local specialties. Just consider the tasty-looking, food-centric moments in this series:

Those curry noodles make a symbolic return in the first episode of season 2, ‘Curry Noodles Are The Best Travel Companion’. During a flashback, Rin eats them on her first solo camping trip. Later in the same episode, Nadeshiko will give Rin some curry noodles, bringing the noodles full circle.

Episode 11 includes S’mores, cooked over a camp stove. Americans know all about this combination of chocolate and marshmallow, sandwiched between graham crackers. But the girls make it sound exotic; which I suppose reflects on how we treat Japanese stuff. 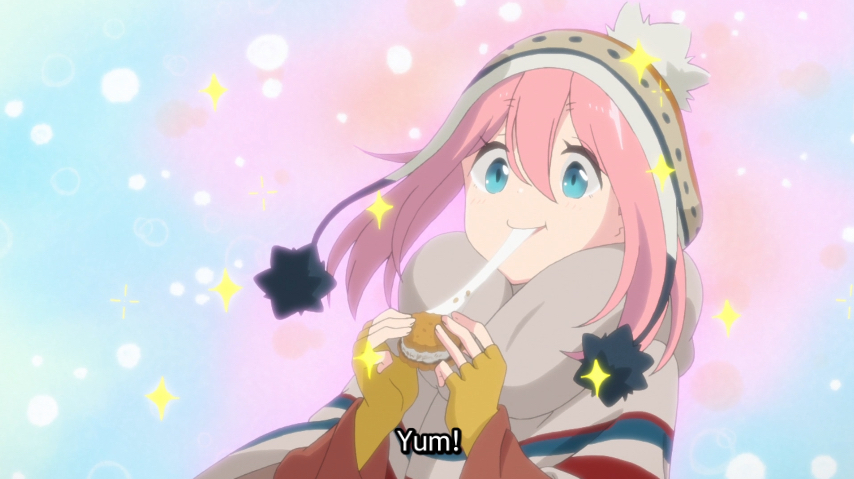 In several episodes, the girls cook their own meals. Some of these are pretty simple, while others are more elaborate. 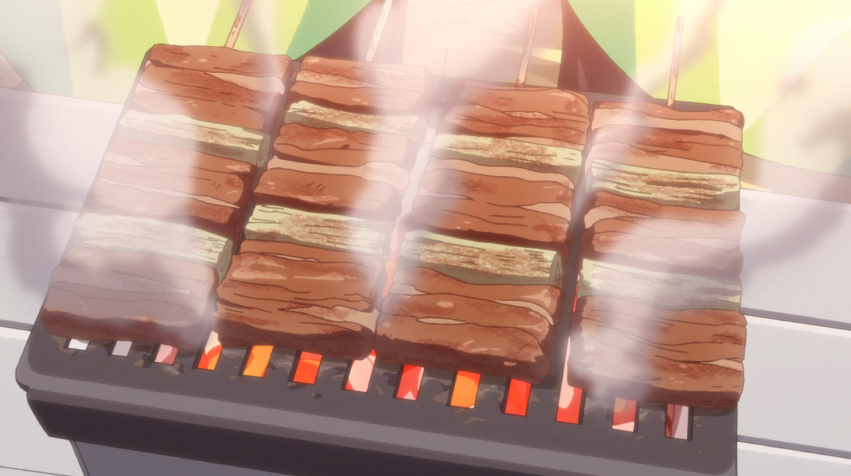 In Episode 6, Shimarin gets a foldable campfire grill and fantasizes about all the things she’s going to cook with it. She talks to Ena Saito about yakiniku, teppanyaki, kalbi, and teriyaki, plus various cuts of meat. Ironically, the local supermarket doesn’t have all those types, and she has to settle for yakitori skewers and hamburgers. But it still looks good. 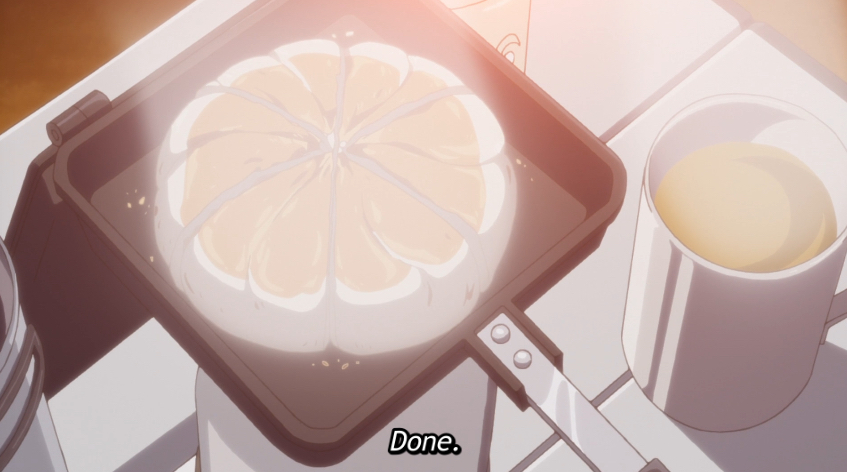 Episode 10 features a simple, yet delicious-sounding idea: Take a steamed pork bun, and squeeze it into a lightly-buttered sandwich maker. When it’s finished, Rin dips it in gyoza sauce.

Episode 11 focuses heavily on Kansai-style sukiyaki, which is treated almost like a religious experience. 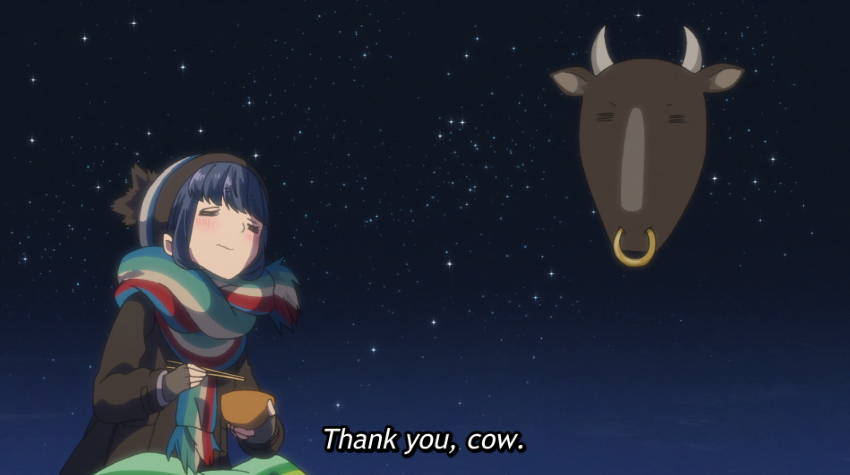 If the cooking scenes make you hungry, and you want to try any of this yourself, many of the recipe instructions are narrated wonderfully by a gravelly voiced Akio Ohtsuka.

In episode 9, Chiaki-chan brags about houtou, a Yamanashi Prefecture regional noodle soup similar to udon. When she offers to make some for Nadeshiko, she gets stuck making enough for her entire family. Worse yet, she doesn’t really know how to make it, and ends up consulting an online recipe. 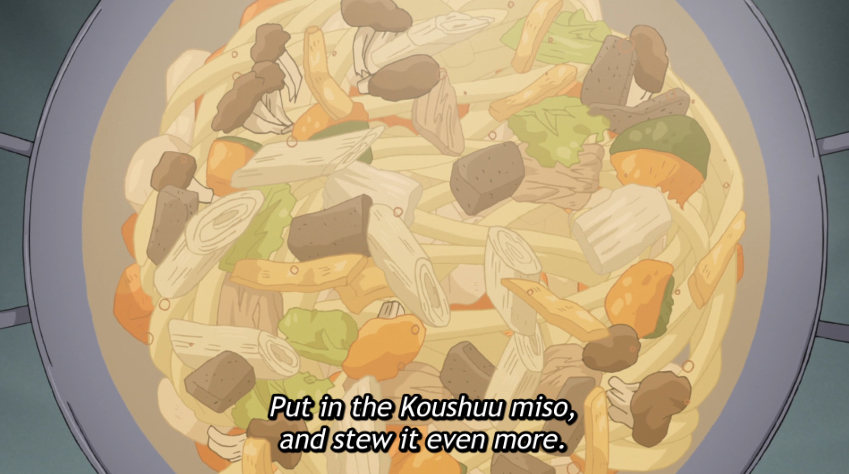 Her version seems reasonably accurate, judging from the photo from this article. 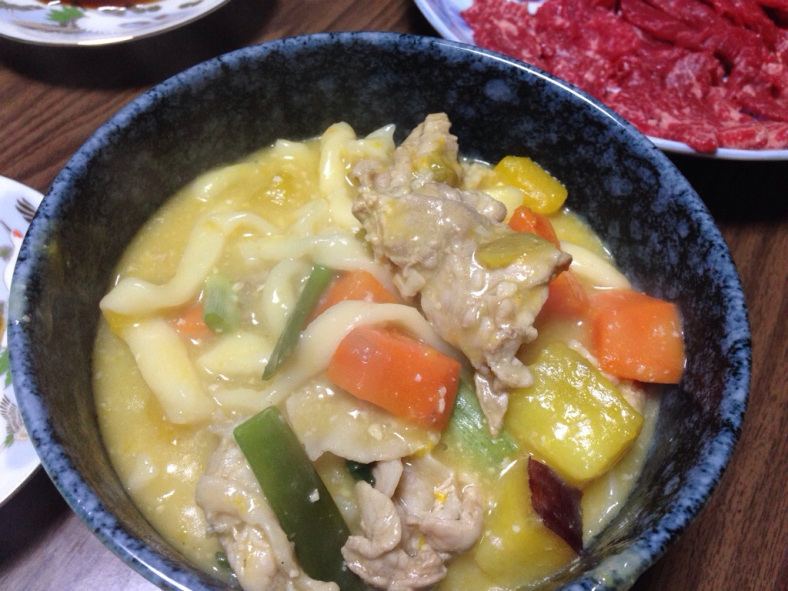 In the same episode, Rin visits Komagane in Nagano Prefecture and tries the local specialty there: sauce katsudon. (Komagane’s tonkatsu sauce is apparently sweeter than usual.) 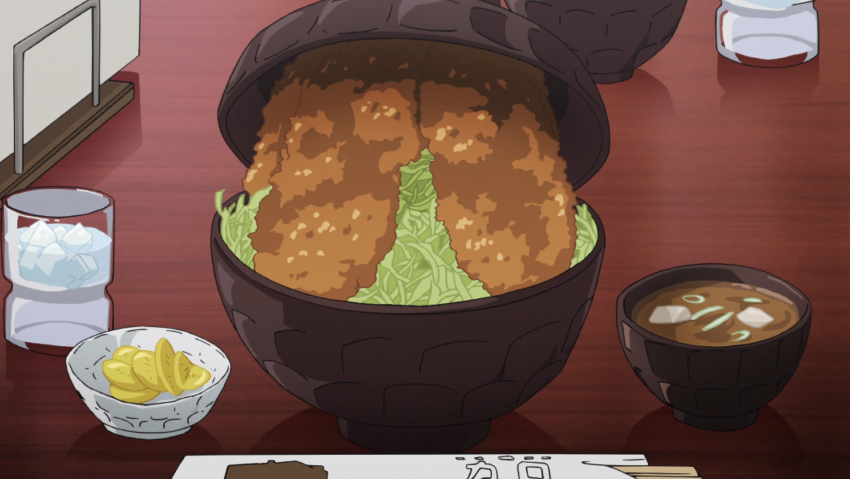 In episode 3, season 2, Rin travels to coastal Shizuoka Prefecture, where Nadeshiko treats her to an unagi (eel) lunch. Rin is shocked at the price, but Nadeshiko’s dad is paying. 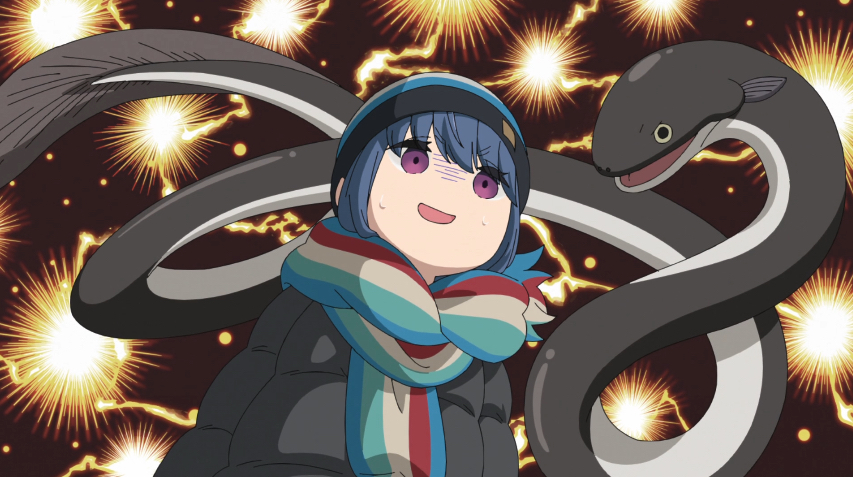 And the season 2 Izu Camp arc added wasabi ice cream to the list.

All the Yuru Camp food I mentioned? It’s just a small appetizer. I didn’t include every example of dango, mochi, ice cream, or other sweets; or the jambalaya, the Japanese breakfast, the foil-wrapped vegetables, or… well, go watch the anime and see for yourself. You can watch Yuru Camp at Crunchyroll.