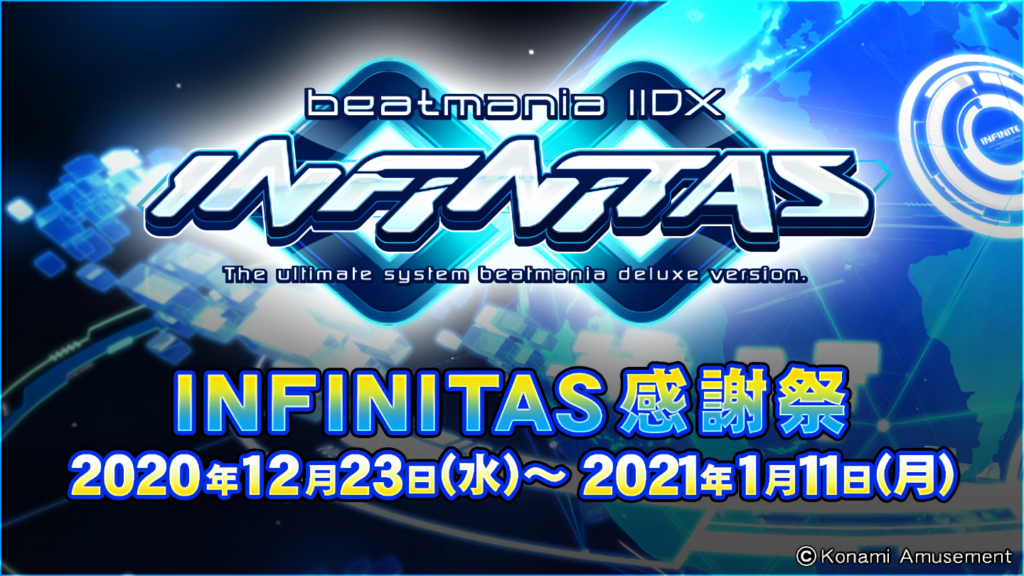 It is that time of year again where KONAMI rewards players for being a subscriber to beatmania IIDX INFINITAS on PC. This year though, they’re kinda going all out, or at least a lot more all-out than I expected that they would. For those of you who are unfamiliar with what I’m talking about, around the end of the year, KONAMI holds an event in beatmania IIDX INFINITAS where they usually just give out additional bits for players to purchase more songs in the game. This year they have added some pretty nice incentives for their INFINITAS Appreciation Event.

Announced earlier today via the official beatmania IIDX INFINITAS Twitter account, the beatmania IIDX INFINITAS Appreciation Event kicked off this morning and will run through 11 January 2021. They started the event with a new song pack being added to the game. What makes this song pack different is the eight songs spread across a series of games, and even better, it’s only ¥980. Much more manageable than the ¥6500 that they normally charge. The song pack will get you the following songs:

Next up, they are going to be giving every player three times the normal bit amount; this is huge. If you have played INFINITAS before, you know how much of a grind getting bits are, and this small gesture will really go a long way.

Last but not least, on the next INFINITAS DAY (5 January 2021), you will get five times the normal bonus, so you will get a total of 25,000 bits added to your account.

Any active beatmania IIDX INFINITAS account is eligible for the INFINITAS Appreciation Event, so if you are a subscriber, what are you waiting for?