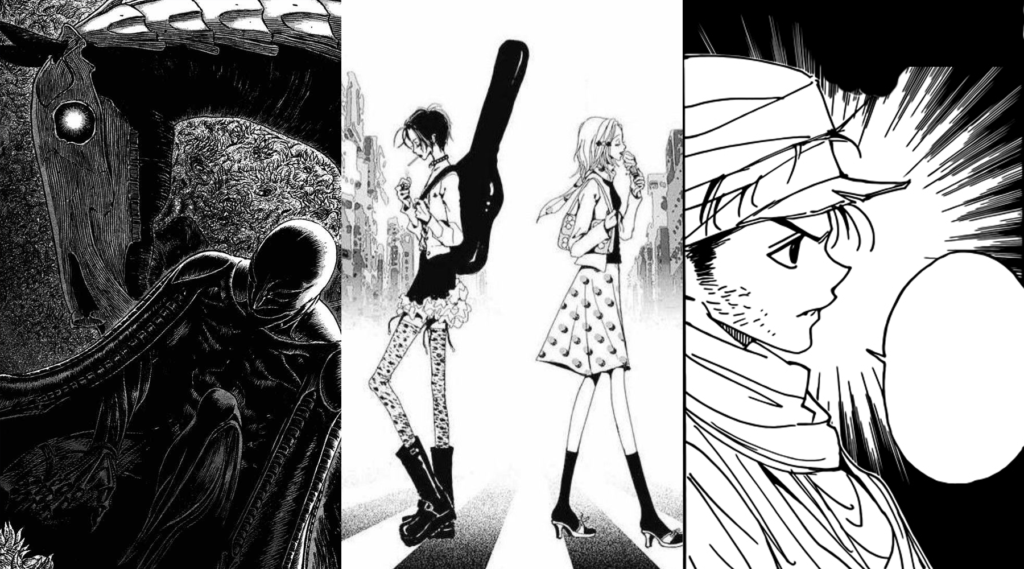 Here’s a story that anyone who lines their bookshelves with Japanese comics will sadly be all too familiar with: because of a trusted friend’s recommendation, or perhaps simply because a neat cover caught your eye, you bring a brand spanking new volume 1 of manga to a loving new home. Instantly you’re hooked and spend a decent chunk of your next paycheck on all the available volumes of said series, devouring them as soon as that package hits the door.

Now hooked, you buy each new volume as it hits the shelves, two or three times a year. You need to know where this story is going. You need to be there when it ends.

You’re getting older, life’s getting more complicated by the day, but at least you have your special manga made just for you. Right? Before you have the chance to realize it, that twice-a-year release schedule turns to once a year… then once every two years… finally morphing into an indiscriminate ‘TBD’. What does that mean? Why is this happening?

One day, you’ll come to terms with the fact that your favorite series has fallen victim to the dreaded and surprisingly common infinite hiatus.

You probably already know the never-ending pain of the infinite hiatus, whether you’ve spent years, if not decades, of your life collecting, reading, and rereading Takehiko Inoue’s Vagabond and Hunter x Hunter after watching the original anime, or eventually making your way to Berserk, as all manga readers eventually do.

It’s not uncommon for manga to get prematurely cancelled when they don’t sell well, that’s just the nature of the business, but all three of the above examples have sold tens of millions of copies and enjoy a wildly dedicated fanbase. Why would these series, whose existence essentially allows their publishers to print money, suddenly dry up?

Sure, an author who has made more money than they could ever spend might burn out working seven days a week for years on end, but why don’t they at least properly end their stories?

Before delving into the thick of it, let’s briefly summarize how manga gets made and published: Even if most series don’t have as detailed art as Kentaro Miura’s Berserk, it takes herculean effort to produce chapters consistently on a monthly basis, much less a weekly one, for years on end.

Manga are also made by small teams, and not just the names credited on the cover.

Editors assist the story-creation and assistants help flesh out the artist’s pencils with inks and toners. After a chapter’s story gets hammered out between a mangaka and their editor, the paneling gets mocked up in sketches; the kinks are further kneaded out; and then the artist and their gang of helpers furiously pen and ink the actual pages.

For any artist to do 40-45 pages monthly, with weekly serializations cranking out 20 pages every 7 days, prolific output and productivity become a creator’s obsession every waking moment. These finished chapters get disseminated to audiences initially through magazines like Weekly Shonen Jump, before getting collected in individual volume form. If a series stops selling or drops in reader-popularity polls, the editors will axe it without a second thought, even if you literally made Naruto.

Much like the anime industry and its problems, the conditions for making manga aren’t optimal, and you can only imagine the toll it takes on its creators over time. Despite earning enough money to last them a lifetime, they usually don’t have the time to spend it.

Now, knowing that creating manga means sacrificing your life energy (even if you’re passionate about your work), it shouldn’t be surprising to hear that most manga fall into infinite hiatus because of their author’s health issues… physical, mental variety, or both.

Blue Excorcist author Kazue Katou openly expressed twelve years of tiredness hitting her at once, leading her to take a very understandable and well earned two month hiatus. Some meet more unfortunate circumstances, with the world renowned creator of Paradise Kiss and Nana getting hit with a sudden illness resulting in a 10-month hospital stay at the peak of Nana‘s popularity. While she eventually returns home, she’s vaguely expressed that she can’t yet make manga, leading to Nana entering the next hiatus space. Yoshihiro Togashi developed a brutal insomnia and stark chest pains when making the ever popular Yu Yu Hakusho, which didn’t magically subside when he decided to start the even more successful Hunter x Hunter, with increasingly long hiatuses being all but a feature of the comic.

Why don’t mangaka just end their series if they can’t continue, instead of leaving their fans in infinite hiatus limbo? To start, manga magazine publishers aren’t so keen to let their money-making properties just die. Maintaining the illusion that the manga could actually come back keeps interest alive and draws new fans to old series.

We also have to assume that most of these creators wouldn’t opt into this horrible lifestyle once they’ve had a taste of it if they didn’t truly love everything about making manga. Ai Yazawa and Yoshihiro Togashi probably do want to see their series finished, even if they don’t need the money. Still, both of them are in their 50s, and while some people are able to make it work, others aren’t so lucky. At least Kentaro Miura seems to be inching Berserk out of its all-but-infinite hiatus status towards a conclusion that was decades in the making… but even if he didn’t, fans have no right to complain.

We should realize the incredible physical and mental stress that comes with serializing manga, and appreciate the blood, sweat, and tears that fill the white spaces of every page.