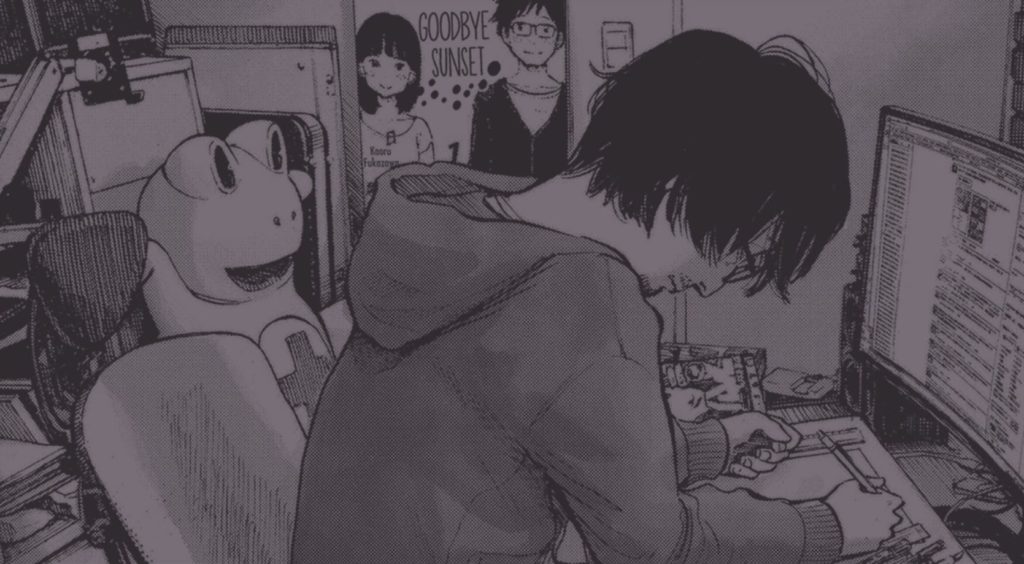 You can never tell how autobiographical manga about people who make manga really are. While Tsugumi Ohba and Takeshi Obata, the creators of Shonen Jump tell-all Bakuman as well as Death Note for good measure, probably didn’t make childhood promises with their future wives contingent on them becoming popular manga authors like their protagonist Mashiro did, their detailing of the weekly manga creation and reception cycle absolutely gives you a peek behind the curtain at not just manga creation but manga creators. Often, they’re eccentrics with an insatiable passion for comics and a real desire to tell stories that make their audiences day just a little bit better. However, the reality of things is that creating manga’s also a job for creators, and one in a cut-throat business where your job stability only lasts as long as your sales numbers too. Even the world-famous Masashi Kishimoto, of Naruto fame, had his new series axed because its numbers just weren’t cutting it.  So what happens after your sales number dwindle and for the life of you the inspiration to create something fresh has up and vanished? Cult artist Inio Asano delves into the mind of the exhausted creative in their one-off comic Downfall. 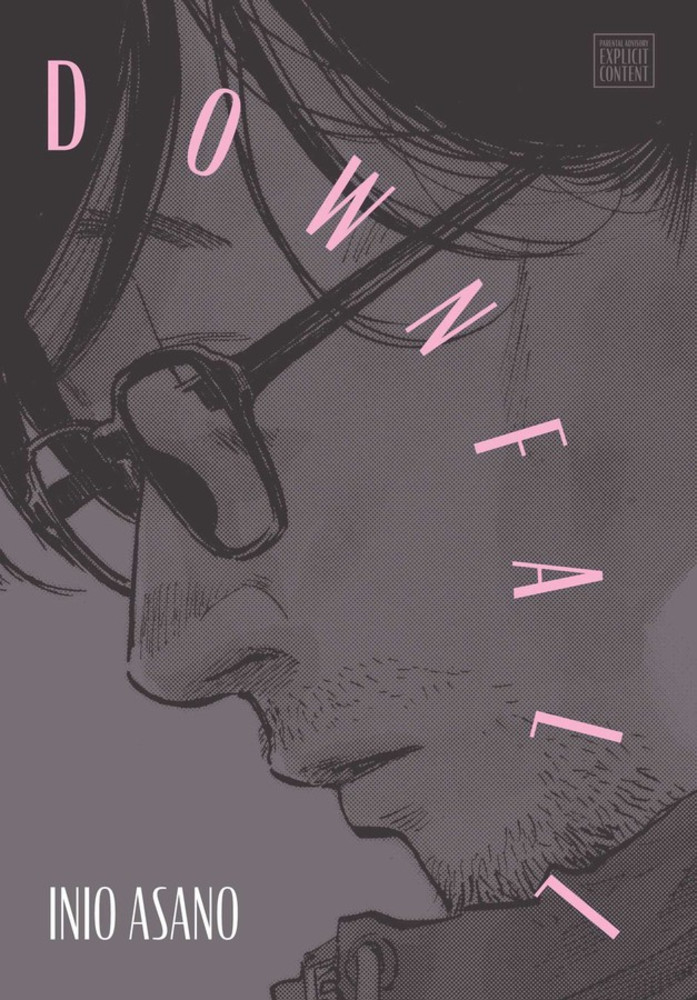 While Bakuman exemplifies the ups and downs of manga creation, it is ultimately the same kind of idealistic Weekly Shonen Jump Comic that it depicts the creation of. Inio Asano the artist has never been an idealist, at least in the positive sense, and they’ve certainly never created monkey tailed boys on clouds in the sky shonen manga. Asano’s cultivated a devout cult audience creating works that take glee in wailing around in the muck. You have a whole group of people out there who found some sort of comfort in the titular Pun Pun from Goodnight Pun Pun alienating himself from most of the world, acting on the impulse to the point of self-destruction. I have my critiques of that comic, but I understand the catharsis it allows people to undergo; ‘Thank god I’m not the only one this screwed up!’ With their penchant for the introspection and tackling the darker sides of human relationships, Inio Asano is often compared to The Flower Of Evil’s Shuzo Oshimi. Downfall actually alongside Oshimi’s currently running Blood On The Tracks in Big Comic Superior, and the launch of both was marketed as the two twisted visionaries coming together for the first time. Obviously, a creator like this will have something different to say about manga.

Downfall wastes no time delving into that trademark Asano emotional murkiness. After some short exposition, the comic starts with the nearly 40-year-old Kaoru Fukazawa finishing up his former hit turned stagnant manga called ‘Goodbye Sunset’. His wife, a manga editor at the publisher he works at, hands him the comic of a younger, increasingly popular artist she’s now managing in hopes he finds some inspiration before running out the door to meet the said artist.  Kaoru heads to the ‘Goodbye Sunset’ wrap-up party, says something generic about wanting to create something inspirational you can tell he doesn’t believe, and eventually wonders off to go fool around with an escort. The opening chapter then ends with him telling his wife he wants a divorce. A bleak way to start a series for sure, and interestingly Asano got married just a year after wrapping this up. One hopes Fukazawa isn’t a 1 to 1 stand-in for the artist, but I’d like to note that maybe Asano shifting to their version of ‘a comedy’ in their currently running Dead Dead Demon’s Dededededestruction after nearly a decade of emotionally harrowing work saved them from a similar path of destruction. 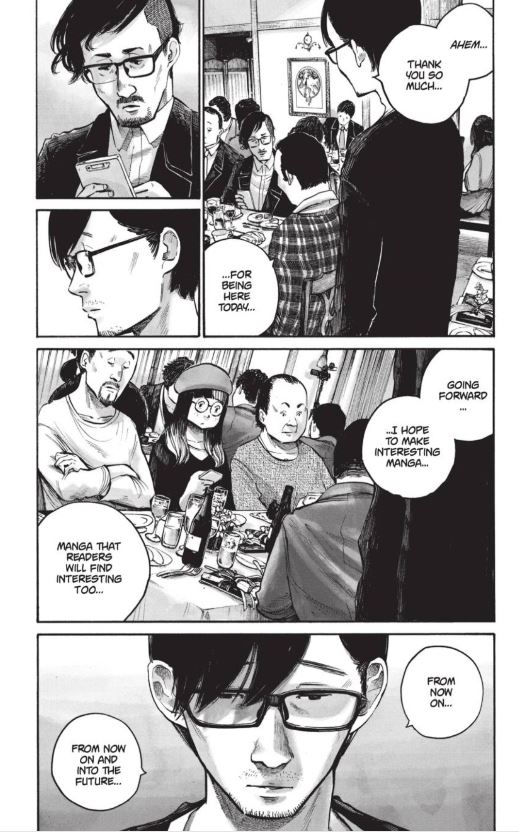 Reading Downfall at a time where only a couple months ago one of the biggest manga artists of all suffered defeat and when just this week arguably the most popular series in recent memory finished before ever having the chance to falter added some additional nuance to this comic series. At first Kaoru, to himself mostly, tries to argue that sales numbers aren’t everything but that fall from grace is the white elephant haunting every page of the book. He tries to supplement that argument with some additional modesty, in the form of rhetoric about manga artists being ‘not that special’. While it’s not a Kakushigoto style secret, he doesn’t exactly advertise his profession to Chifuyu, an escort he starts requesting over and over again and somehow successfully convinces to spend time with him outside of her work. The only time we see Kaoru Fukazawa not completely miserable is when he’s with her, clearly not the healthiest of relationships though, and after it cultivates in a trip to her hometown where the two mostly just talk in between physical excursion.

Inio Asano’s polished art is as striking and sublime as ever, doing a lot of the heavy lifting in giving these conversational moments their wait. See, unlike Pun Pun, there’s no narration or abstraction and nearly all of Downfall boils down to a series of artfully depicted conversations. It does share common ground in Goodnight Pun Pun, in that its the story of one man continually making bad decisions and treating everyone around him like garbage, but the ugliness is so direct this time around. (Spoilers until the end of this paragraph, proceed with caution) There’s no sympathy to be found anywhere for Kaoru Fukazawa, and he’s not granted any redemption as a person at the end of the story either. Even Fukazawa the manga artist takes an ugly turn at the end of the book; His answer to a world driven by popularity and sales numbers is to pander from her on out. His following work is a huge success but he can’t help but slip that, in his own words, he created his work for idiots. Whatever integrity he had at the beginning of his career is gone, but this is an Inio Asano comic here so you have to keep in mind he’s also ultimately just a jerk. 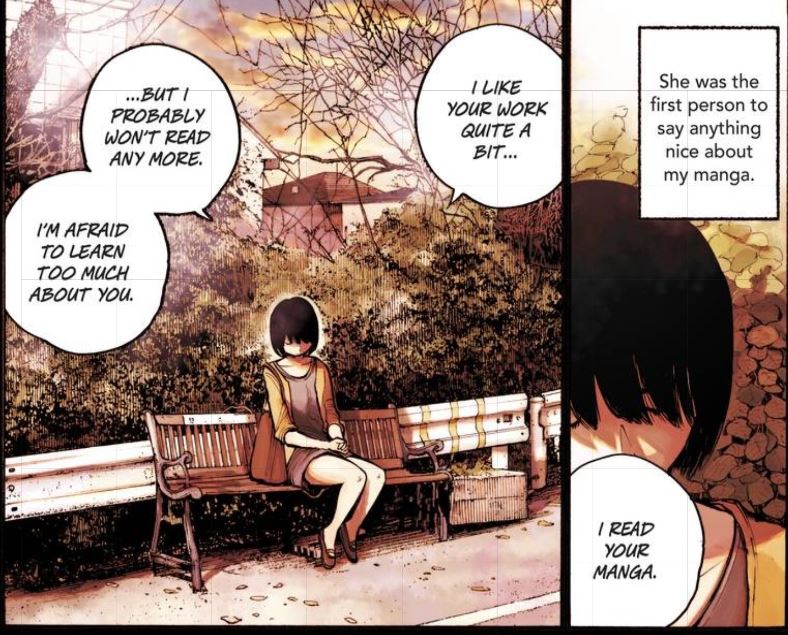 Ultimately Downfall is more of an Inio Asano manga than one that speaks to the life of a creative as a whole. It follows the creator’s already trodden ground of ‘the bad feelings being the point’ but does it, comparatively, in a less over the top fashion than Goodnight Pun Pun. Despite manga production not being the main focus of the comic, readers do get a good look at the flipside of its creation, when a creator’s unable to do so anymore. Unlike Kaoru Fukazaka, Inio Asano is still pumping out comic after comic even as they approach 40 this year, and also unlike their protagonist, they stick to their guns for better or worse. Sometimes you have to lift your heads from the panels to see the real happy ending.