Walkman. Unless you’ve been living in, I don’t know, Japan? It’s a word you probably haven’t heard for the better part of two decades. ina time where even the iPod has gone the way, of 50 dollar two-episode anime VHS tape, the Walkman’s basically the equivalent of a dinosaur fossil. Here though, Sony’s quietly kept the brand alive all this time although it no longer specifically refers to portable CD Players; You can still buy those too as CDs are still alive and well in Japan. The entire brand is getting a facelift from manga artist and illustrator icon Inio Asano who asks ‘Wired or Wireless’ in this new ad campaign. 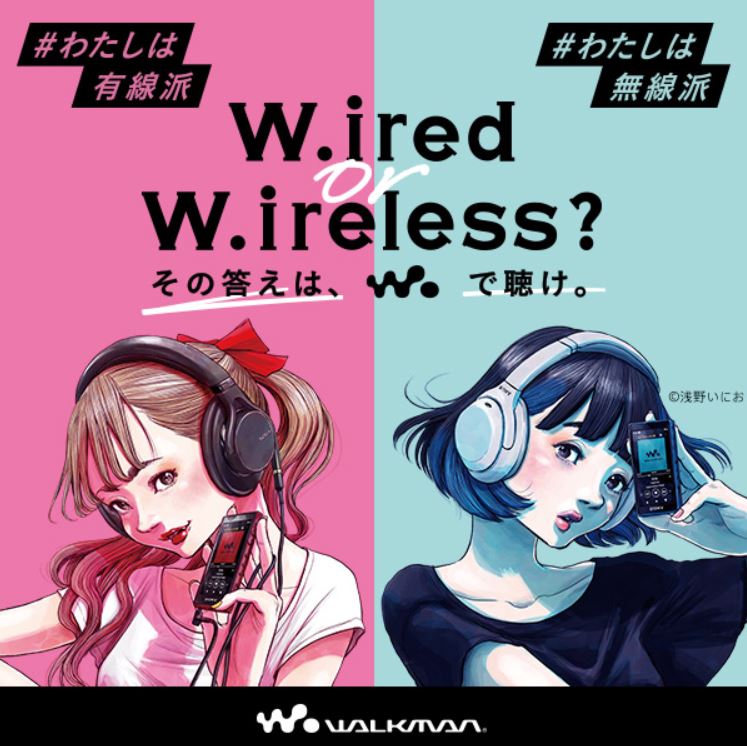 I suppose that the entire point of the ‘Wired or Wireless’ campaign Sony’s running for their Walkman brand is that you can, in fact, use wired headphones with their product! Remember a few years ago when everyone flipped out that apple was removing the headphone jack from the iPhone and now every other phone company has done the same thing with their cellular offerings? Inio Asano and Sony are here to tell you if you want to keep a dedicating MP3 player in your pocket in 2020, you can have your headphone jack back just like you used to!

Just looking at the image above and it’s no wonder why Inio Asano keeps getting illustration work outside of their manga career. They’re admittedly rather talented at drawing cute girls and a good chunk of advertising in Japan does boil down into having them. Whether you love Goodnight Pun-Pun or think it’s too much, there’s no denying that Asano’s pen game has pop to it. I can’t say that their illustrations alone are going to have me go out and buy a Walkman MP3 player and branded headphones, but I’ll admit it’s pretty good advertising all things considered.

Find out more details of the Walkman campaign here.