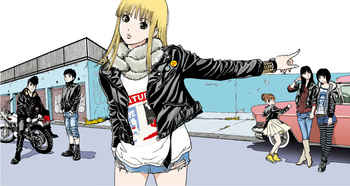 When it comes to queer representation in anime and manga, there are a number of examples that both progressively and problematically portray same-sex relationships, characters, and attraction. However, few mainstream series feature a central character who is, to use contemporary vocabulary, a trans female. Stop!! Hibari-Kun! does just that in a surprisingly refreshing way, considering it’s early 80’s creation.

Written and illustrated by Hisashi Eguchi in 1981, Stop!! Hibari-Kun! began as a series published in Weekly Shōnen Jump. With the structure of a gag-manga, or a comedy that focuses more on a comedic premise than plot, Stop!! Hibari-Kun! ended up achieving more depth than a series more typical of this genre might.

At the time, there was a trend in popularity for romantic-comedies in shōnen manga and anime. Eguchi’s intent was to create a series that subverted the expectations of and made fun of the genre. Even the title of the series was developed in this vein, taking inspiration from Hisashi Sekiya’s popular manga, Stop! Nii-chan.

The basic plot of Stop!! Hibari-Kun! centers around the series protagonist, Kōsaku Sakamoto. After the death of his mother, Kōsaku is sent to live with a friend of hers, Yakuza boss Ibari Ōzora, and his four children. Upon first meeting Ibari’s four kids, Tsugumi, Tsubame, Hibari, and Suzume, Kōsaku is particularly struck by the beautiful Hibari. He is surprised to find that, while Hibari identifies as female, she was in fact assigned male at birth.

As a gag-manga, the series has an episodic, sit-com-like structure. There are few overarching plotlines and each installment typically has a conclusion without requiring much of a throughline. The characters and premise are established and from then on, each issue puts those characters and their circumstances into a different setting.

For instance, at their school, Hibari is enrolled as a female student and their classmates don’t know her “secret.” All other male students are in love with Hibari and jealous of Kōsaku for getting to live with her. A number of comedic plotlines center around jealous girls finding out Hibari’s secret or what her gender identity means for swimming at the pool etc.

The most refreshing thing about the series is that, while there are some problematic elements to how Hibari’s character is portrayed, the punchline tends to be other characters’ extreme reactions to Hibari’s biology and the ways in which she is able to keep her secret. Hibari herself is never the target of the jokes. 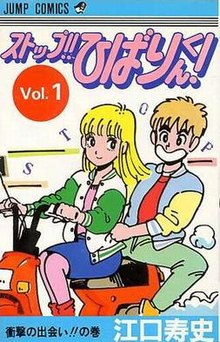 There is no more tragic backstory for her than there is for Kōsaku (both of their mothers have passed away), Hibari passes as female extremely successfully and is all around a bit of a golden girl. Athletic and smart, she’s beloved by everyone. While one of her older sisters, Tsubame, isn’t pleased with Hibari presenting as female, her younger sister accepts her and her other older sister is supportively indifferent.

The relationship between Hibari and her father is probably the place where the series finds itself refreshingly complicated. As a hypermasculine Yakuza boss, Ibari is not particularly happy about the fact that Hibari presents as female. Yet, where a more dramatic tale might have him reject her or be abusive, Hibari lives at home with the family, is able to present herself as she desires and was able to enroll in school due to Ibari using his influence with the principal of their school to make an exception for her. 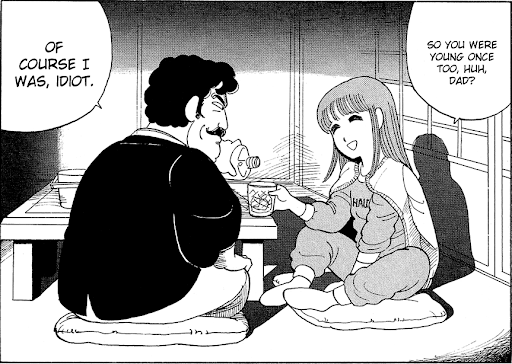 While a throughline of humor does center on Hibari’s flirting with Kōsaku and Kōsaku’s uncomfortable reactions, Kōsaku does care for Hibari. He helps prevent her from others’ attempts to out her, keeps her secret, and the two even share a kiss at various points in the series.

From Manga to Anime

One of the more notable things about the series would have to be the fashion illustrated in Eguchi’s work. A testament to the ’80s, the characters attend a school where they don’t have to wear uniforms. In each different chapter, the characters wear different clothes, each exhibiting individual styles.

As such, it became hard for Eguchi to keep up with the weekly deadline schedule of Weekly Shōnen Jump. The manga series came to an end in 1983, eventually getting published in four volumes while also getting adapted into a 35 episode anime series that ran from 1983 to 1984.

Throughout the series, one thing more contemporary audiences would notice is the terminology with which Hibari is referenced. A lot of characters within the story and synopses refer to Hibari as a cross-dresser. Within the context of the story and the ways in which Hibari refers to herself and moves through the world, in the year 2020, most folks would understand Hibari to be a transgender female.

An extremely thorough and insightful video essay by a Youtuber and musician named Hazel, entitle “Stop!! Hibari-kun! and Trans Representation in Anime” does a great job of examining the series in context of anime and trans representation in Japan as a whole. One of the interesting elements at play is the role semantics play with regards to how Hibari is referenced.

While in the series characters use the word “okama” which is most simply translated as a slang word for a gay man. Literally translated, it means “a pot, a pan,” the word obviously has a lot of cultural context that isn’t easily translated. In fact “okama” typically refers to gay men that are particularly effeminate and is often applied to drag performers in particular.

Even now, translating the word “transgender” from Japanese to English isn’t particularly simple. Hazel’s video essay also does a great job of articulating the relevance of a lighthearted comedy in context of trans representation. The lightness of the storylines is refreshing when, even by contemporary standards, queer narratives often end up dramatic tragedies with nothing but struggle and suffering for the queer characters.

For a series from the 80’s to avoid the pitfalls of having Hibari meet a tragic end, or be depicted as lecherous, sick, or perverted; that Hibari rarely finds herself the punchline of jokes, is groundbreaking.