Interim Results for One Piece World Top 100: All About Luffy vs. Zoro 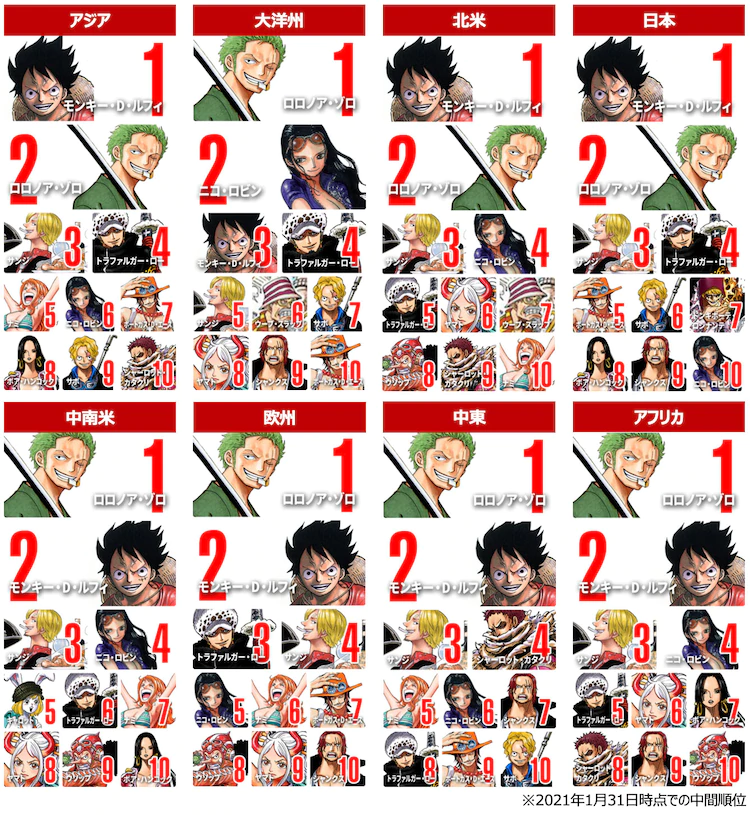 The interim results are out for the One Piece World Top 100 global popularity contest, and the winner so far should come as no surprise: Monkey D. Luffy, captain of the Straw Hats and the future Pirate King. Some of the other results are more interesting, however, and there are some discrepancies between the different regions that are worth dwelling on.

Bringing up number two and number three on the worldwide interim results are Roronoa Zoro and Sanji, respectively. As the second and fifth members of the Straw Hat crew, this should come as no surprise given that they have been around since the beginning, but what is even more surprising is that Nami is stuck down in seventh. Nico Robin, meanwhile, sits above her at number six.

Moving away from the Straw Hats for a second, Trafalgar Law has taken a very well-deserved fourth place in these One Piece World Top 100 interim results. As one of the series’ best supporting characters, I have been voting for him alongside Donquixote Doflamingo (number 25), to provide full disclosure. Luffy’s sworn brothers Portgas D. Ace and Sabo also bring up number five and number eight respectively, alongside Bao Hancock (number nine) and Shanks (number ten).

For the most part, the results from the different regions take on the same shape, but what is interesting is that Luffy is only number one in Asia, North America, and Japan. Everywhere else, Zoro is on top: Oceania, South and Central America, Europe, the Middle East, and Africa. One has to assume that the sheer number of people voting for Luffy in Asia, North America, and Japan cancels out the number of people voting for Zoro elsewhere. That’s why he’s on top in these One Piece World Top 100 interim results.

Nevertheless, things can change very quickly, and you still have until 28 February to vote in the poll. We look forward to seeing who wins then!