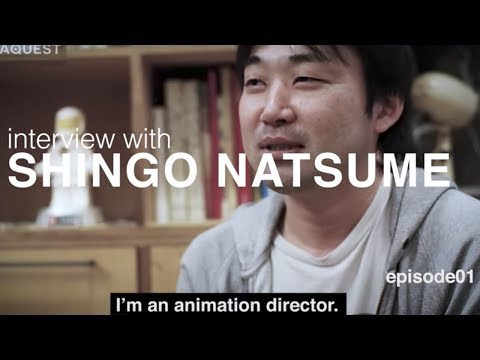 In part one of our video interview series, Natsume Shingo discusses his role in the industry, and just what helped shape him as a person.

Originally entering the industry as an illustrator and animator, Shingo Natsume had a dream of crafting traditional anime into film. With humble beginnings, it was Natsume’s goal to eventually direct his own project. Starting in the field of production, it wasn’t long before he had worked his way up into his first directorial role, the 2012 OVA Horimiya. From there, Natsume would go on to work as director for series such as Space Dandy, One-Punch Man and ACCA: 13-Territory Inspection Dept.

From a young age Natsume knew that an ordinary office job wasn’t fit for him, claiming that he always wanted to create something. Pulling influence from a wide-range of sources including Studio Ghibli’s classic animated film Princess Mononoke, as well as the 1996 cult classic Neon Genesis Evangelion, he set to work in the industry trying to find his calling.

If you’re interested in checking it out, Shingo Natsume’s latest directorial work, ACCA: 13-Territory Inspection Dept. can be streamed on Crunchyroll, here.