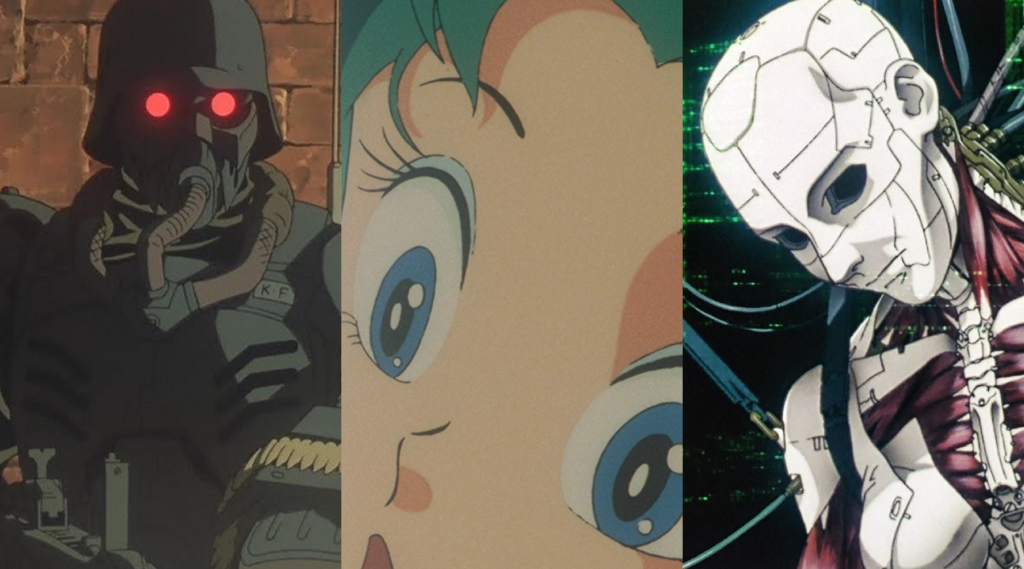 No article could ever hope to say everything that one could and needs to convey about cult classic film maker Mamoru Oshii to the entire world. Then again, one simply needs to watch his films if they truly want to learn about him, and maybe we can at least convince you to do that.

Undoubtedly you’ve already seen Ghost in the Shell, only second to Akira on the influential anime films not created by one director named Hayao, a film so revolutionary Hollywood indirectly plundered it for years before directly translating it in a live-action you’ve already forgotten about.

While an integral part of his canon, his career isn’t so singularly defined by that admittedly distinctive classic in Japan, and we want the rest of the world in on the secret.

Mamoru Oshii fell in love with cinema, particularly the European strain of it as we learn from his cinephile, before he specifically got involved in making anime. Later directing a plethora of live-action films himself, he seemingly doesn’t see a world of difference between the two. As much as Hollywood has ripped from Ghost in the Shell, he’s gone on record saying in response that previous to that, Japanese animation took from Blade Runner, Terminator, and 2001: A Space Odyssey wholesale, calling the relationship between the two creative centers symbiotic. Seemingly these were some films that influenced his very own Dallos, coincidentally the first ever OVA anime series, and beyond.

When asked how he wanted to be remembered, Oshii responded he wanted people to see him as a ‘Conscious film-maker’. To that end, he reads lots of philosophy despite not necessarily enjoying the process of doing so, because he understands it serves his creative goals. Whether he’s noting his own creative process, detailing what people’s expectations are of him, or making educated guesses about the future, he always speaks candidly and in diatribes not unlike those you’ll find in his films.

Despite his more curious effects, he ended up in animation much like anyone else we’ve ever covered on here. Doing bit work for TV animation, starting at Tatsunoko in his case, he went up the ladder via his skills and artistic sensibility alone.

Undoubtedly we’re overly simplifying, but the best of Mamoru Oshii’s incredibly consistent animated filmography roughly boils down to the three components in the heading just above this sentence. Working closely with Production I.G throughout his career, all of his animation looks fantastic, with extreme technical competency, but since he strives for a downplayed realism what stands out most in flash would be how his scenes are physically constructed on the page. With shots so perfectly making using of screen space, something he pays attention to as he considers visuals the most important aspect to any film, it’s no wonder he was able to so easily leap to live action.

That realism Oshii always strives for doesn’t just exist for the sake of his animation; It pairs perfectly with the slow burning and dry atmospheres the director oh so frequently invokes which gives his long-winded monologues and hard-to-follow dialogues the weight needed to make them effective components of his wholely unique making. Often tinkering into social philosophies and grand questions, though strictly from down-to-earth perspectives typically regarding how they relate to human relationships, you come out of his films wiser, provided you can keep attentive throughout. With a tangible benefit like that, who could blame him for deviating from his source material so thoroughly.

We need to clarify something before delving into our Mamoru Oshii starting points: Off the bat, don’t be scared by all the ‘2s’ you’re seeing in these titles. They’re not direct sequels to their previous films, instead just the second entries in film versions of their respective franchises. We promise you won’t need to have seen the ‘1s’ nor will you have to have had seen any of the associated TV series to get a lot out of these classics. Trust us.

Lum herself might be more famous than Rumiko Takahashi’s original Urusei Yatsura series, at least in the present day where she’s living a second life as an aesthetic net icon. While she deserves that, all the fans who haven’t read said original manga are missing out, and those who haven’t seen the Mamoru Oshii directed Urusei Yastura 2: Beautiful Dreamer are missing out even more. He actually directed the first franchise film, subtitled Only You, but that stays much closer in spirit to TV anime series.

Beautiful Dreamer, on the other hand, while certainly keeps the Rumiko Takahashi provided lackadaisical charm, but during the over the course of its story where Lum, Ataru, and co get trapped in the dream world, Mamoru begins to set out on the philosophical meditations and moods he’d build his career on, with a few sequences that surely influenced his future collaborator Satoshi Kon.

We previously recommended Patlabor 2 in our ‘Know the Creators’ series when writing about Oshii’s frequent collaborator and .hack architect Kazunori Ito, so know if you’re recommending it again, it’s essential that you watch this film. Many in the old head community have long called it the director’s best (yes, even taking Ghost In The Shell into account), and the older we get the harder we find it to disagree with them. In something of a proto Stand Alone Complex story, the film tackles terrorism and the growing threat of a military coup, while painting a surprisingly gray and nuanced picture of why people would and do to resort to those methods.

Instead of the time-tested Patlabor main protagonists, demoted to side characters in Patlabor 2, the slightly elder and experienced Shinobu Nagumo takes on the lead role when it comes out that she used to have ties to the suspected terrorist.

While technically based on a pre-existed novel, Mamoru Oshii’s The Sky Crawlers is not being tied to an already popular pre-existing anime or manga, and that gave the animator even further freedom to delve hard into the driest of dialogues forlornest of atmospheres. Though as we’ve discussed, he’s never been afraid to take liberties regardless of whose baby he’s concocting in the process, and we love him for it.

Still not having to do that meant creating a world even closer to his ideal than ever before, and, boy, he makes you stew in his crushing invisible haze for the duration of what had been his final animated film. Centering around genetically engineered teens who never age, made to play out war games via aerial dog fighting for the rich, the director was clearly in his element.