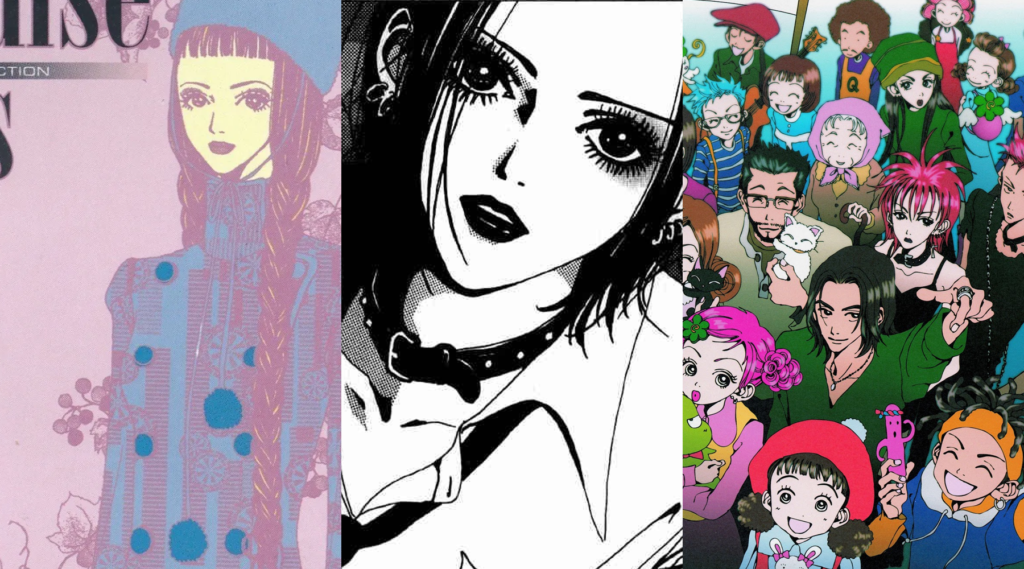 As the 21st century not-so-comfortably settles into its third decade, the likelihood it’ll be another without a major presence of Ai Yazawa‘s genre-defining and genre-defying comics will make us all poorer. Though, to be clear, her continued recovery from physical ailments so bad they left her unable to draw for long periods of time without intense pain matters significantly more than us getting more work from a mangaka who’s sacrificed so much of her health and time to deliver a bibliography unlike any other creator’s.

She’ll forever be remembered as one of manga’s titans for what she’s already accomplished: she brought both the most realistic perspectives on love and growing up found in manga, and created meticulously beautiful art in a style entirely her own. Still, with Sentai Filmworks finally rereleasing the long-gone Nana anime, complete with their Anna Tsuchiya bangers, we’re taking the opportunity to revisit one of the most influential women in Manga.

Not her real last name (Ai’s her actual given name), Ai Yazawa cribbed the ‘Yazawa’ in her non de plume from veteran Japanese singer-songwriter Eikichi Yazawa. Not too many details are out there about her early life, but she particularly enjoyed the manga magazine Ribon growing, which would eventually run her Gokinjo Monogatari and Tenshi Nanka Ja Nai.

Unsurprisingly, she holds an interest in fashion and while she preferred western-style clothing in her younger days, she gained an appreciation for Kimono and the like as she aged, not unlike her contemporary Moyocco Anno. During Nana’s serialization, she called Muse her favorite band and has stated she’s in general just as influenced by musicians and designers as she is from other mangaka.

5 years ago, in an interview given in a now-defunct magazine, Yazawa clarified her intent to someday return to Nana, naming it her life’s work and implying the hiatus really isn’t something she wants to be doing.

Identifying Ai Yazawa: The Harsh Realities of Love In Portrayed In Rich Ink

Ai Yazawa’s art is unmistakably her own, long departing her earliest Ribon magazine influences. Starting off with tall but otherwise realistically proportioned characters, more common in josei comics than your average shojo romance, and then adorning these bodies with svelt fashions and, admittedly trendy but, equally realistic hairstyles, the way the girl’s comic queen puts pen to paper perfectly complements her down-to-earth approach to story-telling.

All the fine-line detailing she adorns her character’s clothing and facial expressions alike, all help to home-in their three-dimensionality.

With her wholly unique art-stylings comes that perfectly matched real-world story-telling: She does write about love and growing up, but more often than not harps on all the ugliness that comes along with both. Romance gets utilized as one of many means for her characters to develop, where lesser shojo do the reverse, each having differing views and methods of engaging with said subject. Whether Ai Yazawa’s writing about high schoolers or adults, she strives to portray fully realized women who wear their strengths and faults on their sleeves.

Narrowing down Ai Yazawa’s catalog to just three picks for the newcomer is, unfortunately, not too difficult of a task. Because of the previously mentioned health conditions presumably still plaguing her, she’s been unable to put out a full volume of manga since 2009. Even that hard end point to her career, only two of her works were ever properly released in English, though our third choice has seen some release in the European markets.

We’ve talked about Nana at extensive length before, but with the manga virtually being the best of its kind, we have no option but to recommend the title every chance we got. Selling tens of millions of copies around the world, Ai Yazawa’s tale of two girls sharing the same titular name and coincidentally moving to Tokyo on the same night remains manga’s most moving portrayal of deep female friendship juxtaposed against grounded adult conflict.

Where other shojo and josei manga largely center around the trials and tribulation of love, Yazawa commits to making it only one part of the Nanas’ complex web: Just as important are them figuring out what they want to individually achieve in their lives, and what they’re willing to sacrifice or not along the way.

Ai Yazawa struck gold in her depiction of a straight-A student whose modelesque figure lands her in a gang of delinquent fashion designing teenagers, forever altering the course of her life. After getting charmed by the sharply dressed and sweet-talking George (not pictured above), former role model pupil Yukari (also not pictured above) realizes she wants a lot more than high marks and the safe path in life.

Released originally in five short volumes, though currently sold stateside in a convenient over-sized single Omnibus, Paradise Kiss was defining shojo manga in the early 2000s for how it told a grounded story and presented itself much less-flowery than its romance comic peers. We have to note, its anime adaptation directed by the late, great Osamu Kobayashi shouldn’t be ignored.

Despite Paradise Kiss being sacred hallowed manga ground and a sequel to this thing, Gokinjo Monogatari never got released in The United States. Hell, a 30-minute movie adaptation of this comic aired alongside a Dragon Ball film in theaters, and yet the comic that made AI Yazawa a household name amongst shojo magazine stays unknown to English-speaking audiences.

France, Germany, Italy, and China can say otherwise, but no one here wanted to chance this delightful Neighborhood Story (that’s what the name translates to!) that saw Ai Yazawa laying the foundation for her signature illustrative and narrative that would make Paradise Kiss and Nana the all-timers they both are.

If you happen to know French, German, Italian, or Chinese, pick this baby up.