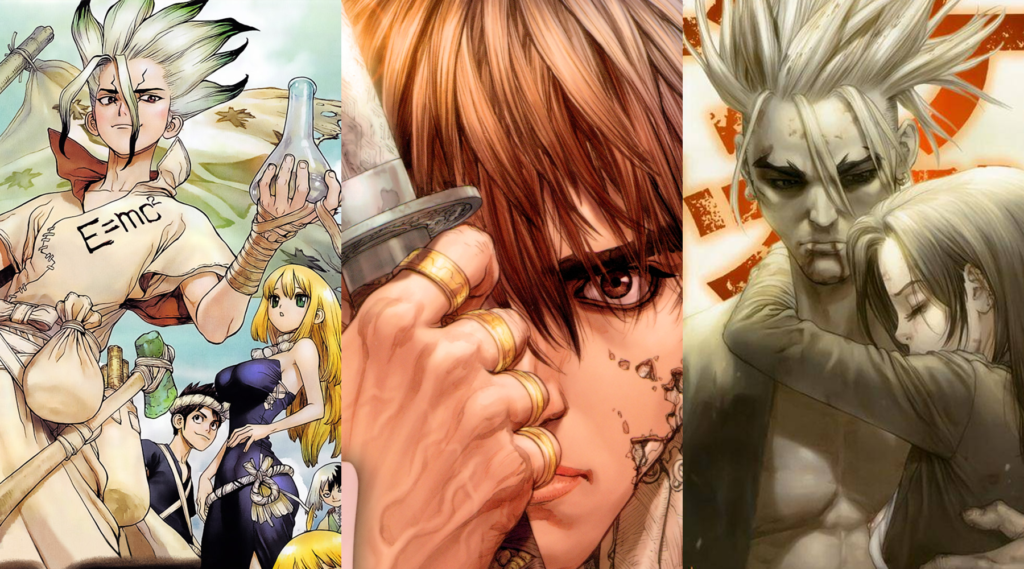 Boichi’s finally become a household name in the poster-clad dwellings of anime and manga fans around the world, thanks to the widespread success of his shonen jump Dr. Stone. Of course, some of that credit has to go to Eyeshield 21 author Riichiro Inagaki who pens the most scientific comic to ever grace the pages of the world’s best-selling manga magazine. But it is Boichi’s unmistakable, meaty art that goes a long way in tricking people to actually learn about something when they think they’re just reading comics!

Through Sun-Ken Rock among other titles, some had been aware of Boichi before his Jump debut, a move that in fact shocked those who did. Regardless of whether you learned about the Korean-born artist through his major hit, were one of the Sun-Ken Rock hipsters actually taking advantage of Crunchyroll manga, or were a diehard Manwha fan back in the day, Boichi’s one of the most consistently spectacular artists working today.

You know Boichi’s South Korean, but did you know he’s approaching 50 years old? The legally named Mu-jik Park had been making manga for years previous to Dr. Stone, and Manwha before that. Despite going to college for Physics, which perhaps helps with his current Shonen Jump hit, he knew he wanted to create comics from a young age after giving up on his dream of becoming the president of South Korea. There, he debuted all the way back in 1993.

Surprisingly, he cites the classic Video Girl AI as his favorite Jump comic, though he had never actually encountered the magazine until visiting a rare bookstore in South Korea that had a copy when he was 21. Now that he’s in Jump, he’s committed to drawing Dr. Stone as long as possible, though has admitted his favorite character from the series is dear Kohaku.

When we think Boichi, what first comes to mind is his approach to bodies: distinct muscles, textured hair, and realistic facial experiences. Boichi achieves weight in his manga through his unique art style alone, independent of his story contents. Heavy on the inks and white space, the resulting contrast permits one to almost see a flesh texture rendered over his creations, imparting a sense of skin we’ve only otherwise seen in Baki.

Of course, for his Shonen Jump contributions, he’s been able to successfully streamline and tweak his style to a more child-friendly presentation while still holding onto his aesthetics.

This is our traditional Know the Creators segment where we impart to our dear readers a small handful of entryways into our subject of the week, this time Boichi. Despite his robust catalogue being largely worth reading, unfortunately, the vast majority of it isn’t available in English, so our options were limited. One that was that we didn’t include, Raqiya, unfortunately, is so out of print now that unless you want to spend $877 on an Amazon third-party seller for Volume 5, it’s also not a real option.

Dr. Stone’s a shining representative of the new era of Shonen Jump comics, where its most popular series like Demon Slayer, Jujutsu Kaisen, and Chainsaw Man, are much less directly derivative of Dragon Ball than The Big 3 of yesteryear. Those who’ve actually read Eyeshield 21, and you should read the premiere American Football manga if you haven’t, know that Riichiro Inagaki’s something of a genius comicker and that talent expressed through Boichi’s sharp and dynamic penwork has proven to be a worldwide success.

Though not the most representative of Boichi’s previous work in the context of his bibliography alone, it’s interesting to see the veteran artist take on a new cartoony edge to depict Senku’s scientific revolution of the future-stone age.

Sun-Ken Rock exists somewhere in the liminal space between Great Teacher Onizuka and an old-school Beat Takeshi movie like Sonatine: At times, the dudes are rocking all the way up to 11, but it cranks up its severity even further. A sweeping tale that bridges the Korean and Japanese gap much like Boichi himself, it sees a former Japanese high-school yanki style delinquent named Ken move to South Korea whereupon he starts stumbling his way up the criminal underworld ladder. Wouldn’t you know it, the girl he’s in love with happens to be a police officer, which as you could imagine complicates his scenario despite being a gangster with honor.

Boichi balances the comedic with some intensely detailed action that grows poetic with each passing volume. Read it on Crunchyroll.

On the surface, Origin does contain a lot of parallels to Naoki Urasawa’s Pluto, it itself a reimagining of a single arc of the most seminal Astro Boy. A lifelike robot name Origin just wants to live, but finds himself in frequent physical conflict with eight of his brothers for x, y, and z reasons.

Despite said similarities, one reads Origin less for the plot and more for the equally spectacular and crushing fight sequences Boichi lays throughout the comic. It arguably features the comic master’s lushest and most ambitious comic book art over its relatively small run, and you won’t regret grabbing these bad boys even if you have to pick them up in a language you don’t understand.

With official German, Spanish, and Portuguese translations out there, we hope it’ll come out stateside someday.