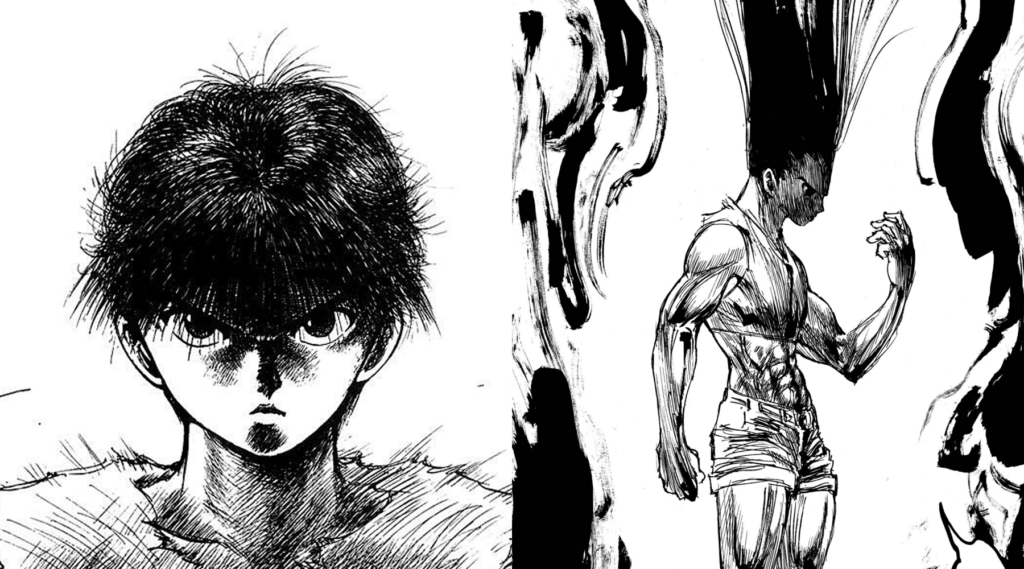 What is ‘luck’ in the manga industry: Any manga author who created a series that successfully established a stable-enough footing in Weekly Shonen Jump before the editorial board can axe it within its first year of publication. That’s luck. What about talent, you ask? A mangaka who goes on to scribe what becomes a signature series for the magazine could probably be called talented. What then do you call someone who unleashed a still-beloved-classic that pushed shonen to its absolute limits, only to follow it up with another series even-more-beloved that threw any preconceived notion of what the genre could be out the window?

Someone with a lot of accumulated health problems after creating some of the world’s most incredible artistry for 30 years straight?

Despite all the hiatuses resulting from said problems, Yu Yu Hakusho and Hunter x Hunter‘s Yoshihiro Togashi has already gone down in history as one of the greatest creatives to ever put pen to paper.

Yoshihiro Togashi grew up knocking around his family’s still operating paper-shop in Yamagata, said to already be dabbling in manga creation during elementary school. He later joined his high school’s fine arts club. Though having entered university for education, one of his early one-shots ended up netting him an (Osamu) Tezuka Award, with Weekly Shonen Jump asking him to haul it to Tokyo to solidify a career in making manga.

He draws inspiration from movies, citing Ridley Scott’s Alien as his favorite, which led him to take influence from the quintessential horror-Sci-Fi illustrator H.R. Giger. Togashi claims to work on intuition when making manga, baffling when you considered how well architectured his visual composition and power-systems are.

Not afraid to take matters on his own hands, despite his pride as an artist, Yoshihiro Togashi chose to end Yu Yu Hakusho in 1994 himself, after editors kept trying to persuade him to take the comic in directions he didn’t feel were right. He’s also gone on record as calling Yusuke’s love interest Keiko a walking manga cliche.

After some not-so-secret friction with his editors and experiencing burnout on Yu Yu Hakusho, Togashi saw things working out for him at Shonen Jump; After creating a short series for the magazine called Level E, he’d go on to meet Sailor Moon creator Naoko Takeuchi in 1997 at a party. She would help him launch Hunter x Hunter in 1998. They’d marry in 1999, becoming anime and manga’s definitive power couple.

Both of Togashi’s masterpieces take from Dragon Ball in one way or another, though weirdly the older YuYu Hakusho is akin to Dragon Ball Z and the younger Hunter x Hunter is the early Dragon Ball equivalent.

His genius, though, comes in via taking the broadest strokes, like ‘strong guys fighting other strong guys repeatedly’ or ‘spirited boy goes on an adventure’, and carefully but enthusiastically contorting them into endlessly wild visions: he would craft martial arts tournaments out of the complex political machinations of the demon world or seriously and philosophically contend with what happens to humanity when a stronger species finally appears.

Rather than depict the worn-out struggle between good versus evil, Togashi’s stories dance in the morally ambiguous grey territory, which has kept them engaging for generations.

Drawing from Akira Toriyama and H.R. Giger (among many others) to form his base sense of aesthetics, Yoshihiro Togashi brings a unique sensibility to shonen artistic presentation. He purposefully employs and switches between multiple visual styles when bringing those pages to life.

During the latter half of Yu Yu Hakusho, he started throwing in occasional hyper-detailed panels to emphasize character expression, which imparted an increased sense of weight and realism to Demon World Shenanigans. He’d more than doubled those efforts in Hunter X Hunter, which saw the inclusion of abstract illustration in addition to his ‘regular manga’ art and the more realistic splashes.

Normally on ‘Know the Creators’ we like to acquaint readers with three of an artist’s works, to give them an expansive look into their repertoire. However, only two of Togashi’s works are available in English, but they’re both ‘GOATed’, as the kids like to say. Younger generations might not be familiar with Yu Yu Hakusho, and some of our older readers may have unwisely skipped Hunter X Hunter. Let’s fix this.

Yu Yu Hakusho immediately made Yoshihiro Togashi a household name to Japan’s young’ns and manga connoisseurs alike when first appearing in the pages of Weekly Shonen Jump in 1990.

The story: After accidentally dying, delinquent 14-year-old Yusuke Uremeshi has to start fighting off demons and others with spiritual prowess to win a second chance at life. Along the way he links with dumber-delinquent Kuwabara, the short and stoic demon Hiei, and Inuyasha proto-type Kurama who all do the whole shonen enemy-to-ally conversion thing, ending up part of the fold.

While the set-up sounds played out on paper, you should know that Yu Yu Hakusho helped pioneer these trends that influenced titles Bleach and Jujutsu Kaisen in the first place, and that Togashi’s execution of his foray into the darker side of shonen remains untouched.

Take the son of a long-disappeared legendary Hunter and a young heir to a notorious family of assassins who wants nothing to do with the lifestyle, add a ludicrously well-thought battle system, a crazy clown guy, and a zeal for adventure, and you’ve got an idea about one-tenth of what Hunter X Hunter entails.

With it being 20+ years old, younger fans were made hip to it via its newer anime adaptation, but the original manga demands you read it. Even if the story and the characters are the same, the comic sees a master of the craft continually outdoing himself as both a story-teller and artist, pushing the entire medium of manga into new heights with each passing arc.