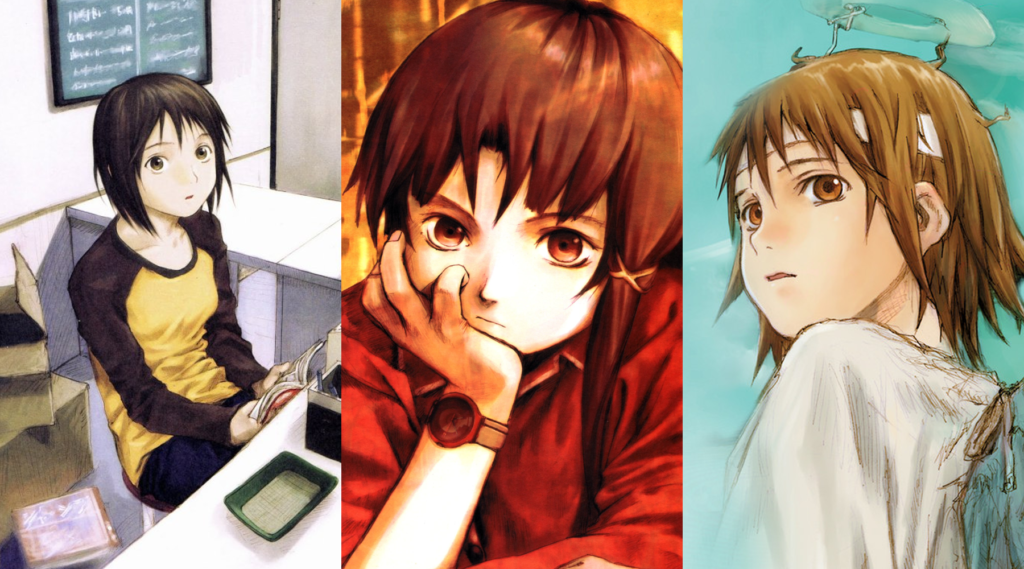 In retrospect, the early 2000s provided a wild frontier for the anime enjoying nerd, no matter what side of the Pacific they dwelled in. The advent of the internet opened worlds of mysterious information and unknown curiosities, and before all this, history got condensed into matter-of-fact Wikipedia articles and cynical YouTube essays, you could hours losing yourself while scrounging for anime and manga recommendations in a net world not-unlike what Serial Experiments Lain portrays.

Conversely, Japanese fans had their own pocket of the internet, but could also dig through the dojinshi tables at earlier Comikets. In all of these cases, if you scratched at your hobby hard enough, you’d come across the equally bewildering and alluring artwork of one Yoshitoshi ABe. Once you locked eyes with one of his portraits of some subtlely stylish girl with a distinct but impenetrable look crossing her face, the intrigue would consume you, forcing you to delve deeper.

Forbidden to read manga as a child, a younger Yoshitoshi ABe explored other outlets for his growing interest in visual creativity, although claims that he had a habit for graffiti which landed him in more than one sticky situation are false. Lazing around after high school, he had a manga artist friend who talked him into becoming an assistant despite that absence of manga from his childhood, which gave him ample opportunity to figure out his rather unique style.

You wouldn’t know it, but he actually hated drawing as a child, though has since learned a love for keeping a pencil in hand. Perhaps his atypical history, for a famed Japanese illustrator associated with the anime world, helped lead him to adopt new technologies much earlier than his contemporaries, not just incorporating digital or 3D graphics, but realizing in the mid-90s how important it was to make his work easily accessible online.

Him being web-savvy essentially landed him that oh so important Serial Experiments Lain gig, which helped lead to other character-designing gigs, novel cover illustrators, and the other odds and ends freelance illustrators do to survive out here.

Despite his professional resume, he’s kept drawing self-published dojin works, largely not H material to clarify, as he says it allows him to explore artistic freedoms his paying gigs can’t.

In Yoshitobi ABe’s own words, his characters tend to be ‘evil looking’, hinting that he’s aware of how intense his work comes off. With lots of fine-line detail in his character work and painstakingly crafted backgrounds alike, coupled with a penchant for relatively realistic human expression in the former, his resulting flavor exudes a derelict aura unique to him.

His dojin work and polished illustrations alike retain a raw-sketch feeling, but closer examination will reveal every line having been carefully placed to great effect. When his art is successfully translated to animation, it offers a grounding effect that is often essential to helping land their Science Fiction elements. Easy to forget you’re looking at drawings despite ABe not utilizing photo-realism in his art.

From the very beginning of ‘Know the Creators’ we’ve opted to introduce readers to three of an artist’s works in an attempt to impart a working understanding of their artistic breadth. If you go back to that first article, you’ll see we recommended Serial Experiments Lain, and now we’re recommending it again. Since Jacob did a bang-up job on Texhnolyze, we’ll let him cover that. Also considering his dojinshi aren’t available in English, we’re sticking with anime. Sorry, folks.

Much has been said about Serial Experiments Lain here at OTAQUEST, other publications, and even social media ecosystems like Twitter and now Tik Tok. It seems as the more time passes, the bigger this cult classic’s cult becomes. It’s celebrated for Chiaki J. Konaka’s predictive meditations of the internet, the incredible and always ethereal music, knife-cuttable tension, and of course Yoshitoshi ABe’s art.

Unfortunately, the only hand-animated and hand-painted of the ABe offerings, his designs are stunningly preserved even when slightly simplified for animation, and seeing said art move about the screen in full remastered Blu-ray quality rightly demands your cost of entry.

Haibane Renmei doesn’t enjoy the same level of cult popularity as Serial Experiments Lain, but everyone who’s ever seen the show adores and wishes more people had seen it. It’s particularly important in the Yoshitoshi ABe canon as he didn’t just create the characters, but the entire show in this case, both coming up with the concept and penning the scripts.

In a fictional, non-descript and rustic European-style town, fully grown humanoid beings who sprout wings called Haibane come into the world via cocoons that just manifest. It contemplates human nature and suicide, all in a Yoshitoshi-controlled world. Its only sin was that it was made after the pen-to-paper era ended but before digital animation rendering techniques were perfected.

Probably the most underappreciated of the Yoshitoshi ABe anime, at least until the unfortunately ill-fated RErideD quietly released in 2018, which surprises us considering, like Haibane Renmei, ABe had a hand in the story too. Specifically, he created the original dojinshi manga that this 2000’s anime was based on. Despite being produced at Triangle Staff, who also animated Serial Experiments Lain and the likes of Macross Plus, it clearly had less of an operating budget than those two masterpieces.

Still being a completely leftfield comedy, melding aliens and poverty society years before Gintama would find international fame doing the very same thing, its lack of pristine animation shouldn’t deter you from flipping charming little oddity on during some bout of insomnia.