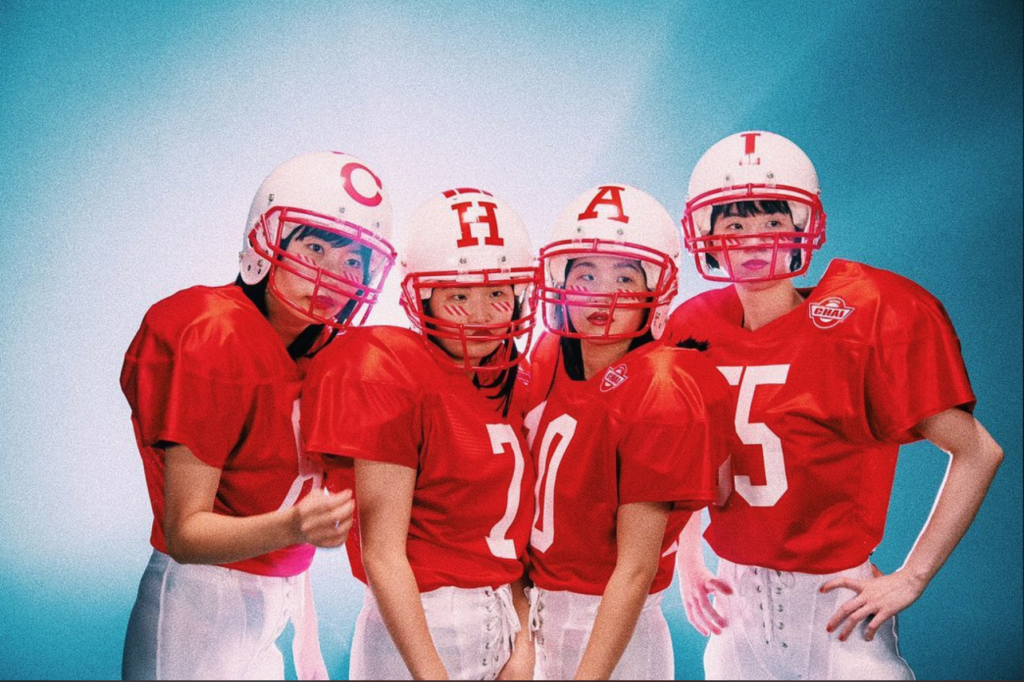 In this feature, Otaquest aims to help introduce some of Japan’s best musicians to the world. Today, a rock quartet creating nervy numbers touching on topics such as fried foods and personal complexes. Beneath a seemingly zany exterior, the group’s music manages to tackle contemporary issues facing women in Japan, resulting in some of the most thoughtful tunes coming out of the country today.

Looking over the tracklists to Nagoya-born rock band CHAI’s albums up to this point initially reveals a group interested in the lighter things in life. Songs from the outfit — consisting of Mana, Kana, Yuuki, Yuna —revolve around topics such as food, bartenders, facial features and house cleaning among much more. Coupled with CHAI’s frantic and often unpredictable approach to song structures, it feels like they are a group following in the footsteps of compatriots such as Shonen Knife and Cibo Matto, creating slightly wonky rock centered around culinary and lifestyle topics. Like those bands, CHAI have attracted international attention that many Japanese acts crave, being able to play shows around the world and even appearing on NPR’s Tiny Desk Concert series.

CHAI is definitely fun, but lurking beneath the good time are more pointed commentaries on modern life in Japan. Many songs revolve around complexes people develop, particularly women, centered around how they look or feel. CHAI isn’t getting on a soapbox as much as smuggling in commentary on modern life in a playful package. Among the many goals they want to achieve, they want to redefine what “kawaii” means in their home country, using their music as a tool for change.

They’ve become one of the most buzzed-about bands out of Japan in recent years, and here is a crash course in CHAI as they continue navigating the global music scene.

CHAI came together in 2012, formed by a series of acquaintances (and the twins Mana and Kana) from the greater Nagoya area. Inspired by a mix of bands running from Tom Tom Club to Tokyo Jihen to Justice among many more, they began playing their brand of topsy-turvy rock around the central Japanese city. They’ve said in interviews, though, that they never felt particularly in tune with the city’s music community, and naturally took the chance to move to Tokyo in the mid 2010s when they could.

Once there, they started really making progress. They began putting out short releases illustrating their offbeat approach to the genre (one example above), featuring dips into other styles and vocals prone to detours. They were still figuring themselves out, but they were en route to their breakout.

CHAI earned reps primarily by playing live, first by zig-zagging around Japan and eventually starting to make inroads abroad, in particular by heading to the South By Southwest Music Festival and Conference in Austin, Texas (documented in their music video for “Sayonara Complex,” an early highlight from them…though, more on that later). In 2017, they experienced their first big moment with the song “N.E.O.,” a rock number with nervy energy laying out their “neo kawaii” mindset. Coupled with an attention-grabbing clip (above), the band started getting attention at home…and abroad.

That cut appeared early on PINK, CHAI’s debut full-length album out a few weeks later. It built on the ping-ponging energy of “N.E.O.” while also showing their sonic variety — they could deliver a tender ballad about love (for dumplings, but love is love), or a soaring synth-pop number about fried foods. PINK stands as one of the strongest full-length Japanese rock debuts in recent memory, balancing the wild (“Boys Seco Men”) with the heartfelt (“Flat Girl”). Lurking within were there observations on being a woman in modern Japan, and dealing with the hangups society sparks in you. Listen to it above.

At some point, CHAI pulled off one of the weirdest tightrope walks in recent Japanese music history. They started getting mainstream attention — magazine covers, appearances on weekly TV show Music Station — at home, but were gaining a cooler type of attention from Western media, usually reserved for groups that don’t make much of an indent in their home market. Soon they were touring North America and Europe with Western acts, and getting the type of attention that government initiatives such as Cool Japan would have killed for five years earlier.

Sophomore full-length album PUNK (above) came out in 2019 and received even more attention around the world. With good reason — it saw CHAI tightening up their sound just a little bit without losing the personality that made them stand out in the first place. Here, the lyrics became a little more pointed without losing humor — they celebrated who they were from their personalities to their curly hair, while also poking fun at the world of fashion and housekeeping. They also instilled a welcome optimism about tomorrow through songs such as “CHOOSE GO!” and “Future.” It landed on many English-language best-of-the-year lists, and still sounds like a blast today.

In the year since, they’ve released a handful of singles building on that one’s sound…while exploring new territory. Regarding the latter, “No More Cake” (above) sees them use samples and beats closer to hip-hop as a base — something they’ve done before — but also sees the band trying out different vocal deliveries, making for one of the more unpredictable numbers in their catalog. Most recently, they collaborated with the band Hinds on the charming “United Girls Rock ‘N’ Roll Club.” Listen to that one below.

CHAI’s first truly great song finds them balancing their playful energy with something sweeter, resulting in their most melancholy moment too.

This ode to gyoza actually underlines what makes CHAI’s lyrics so smart — rather than go down the common path of making a generic love song, they found something they truly love and run with it.

CHAI goes synth-pop, and comes up with an absolute earworm.

A great snapshot of CHAI’s positivity coming together with an appreciation for groups such as Tom Tom Club.

A catchy self-love anthem centered around accepting one’s hair for what it is. All topped off by one soaring hook.